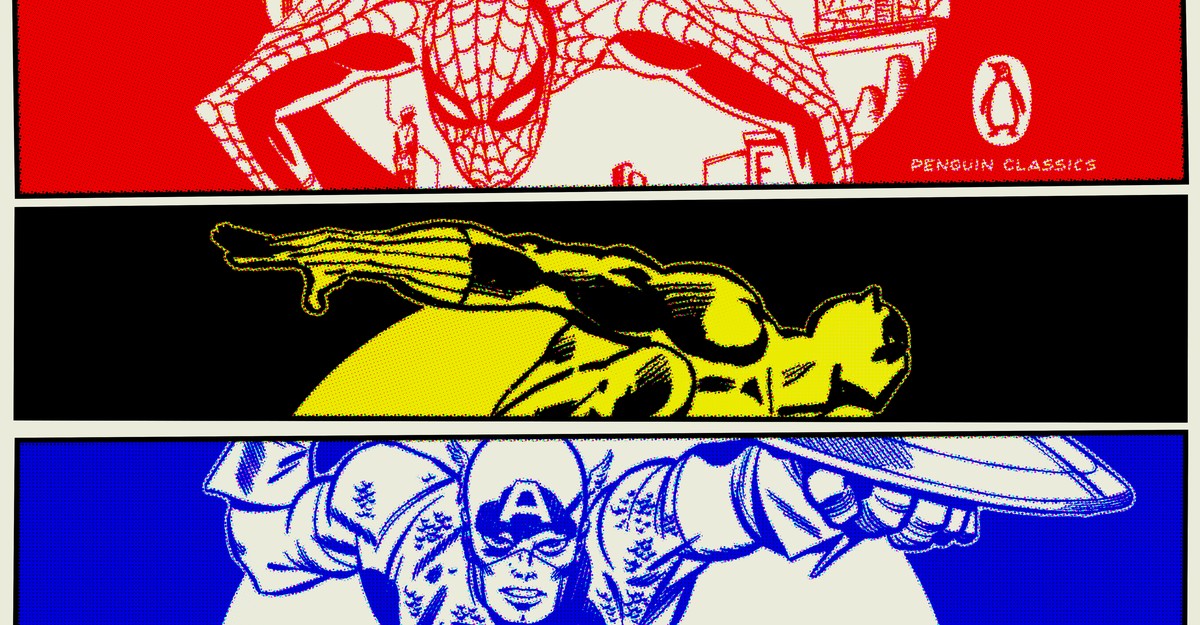 The slow embrace of the comic-book medium by elite audiences is a history with its own particular milestones, each marking a moment of sudden approbation by previously disapproving constituencies. George McManus received a congressional dinner and warm words from Franklin D. Roosevelt in celebration of his comic strip, Bringing Up Father. Mid-century-modern artists like Roy Lichtenstein adapted (okay, lifted) images and panels from comic books. Art Spiegelman received a special Pulitzer citation for his graphic novel Maus, first published in book form in 1986. That same year, this magazine featured a story titled “Comic Books for Grown-Ups”—an early entrant in a genre of journalism so pervasive, it’s sometimes known to fans by the acronym CAFKA (as in, “Comics aren’t for kids anymore”). Another Pulitzer, 2001’s fiction prize, went to Michael Chabon for The Amazing Adventures of Kavalier and Clay, which suggested, alongside books like Jonathan Lethem’s The Fortress of Solitude, that comics, particularly the branch of the medium dedicated to superheroics, were a useful basis for high-culture novelistic meditation.

And now, a generation after that, the apotheosis: Marvel comics have become Penguin Classics.

Last month, the “leading publisher of classic literature in the English-speaking world” (language from the company website) released, in collaboration with Marvel, three volumes from what’s being called the “Penguin Classics Marvel Collection,” featuring a hefty series of stories from the early days in the life of three Marvel superheroes: Spider-Man, Captain America, and Black Panther. We’ll get to the whys and wherefores of the particular selections a little further on. But let’s first dispense with the question of whether what’s called for is the wringing of hands, gnashing of teeth, and quoting of “O tempora! O mores!” or the jubilant acknowledgment of a birthright.

Maybe let’s start with the one figure on record who’d been insisting that these books were classics from the beginning—though, to be fair, he had skin in the game. “With this classic take, the Marvel age of comics reaches a new plateau of greatness!!!” shouted the text on the first page of a typical Marvel comic, the words undoubtedly penned by the Marvel Universe co-creator/wordmeister/company face/pitchman Stan Lee. Lee himself—the only figure represented in all three of these volumes—was the most vocal proponent that issues like the ones reprinted in these volumes, of The Amazing Spider-Man and Tales of Suspense and (yes) Jungle Action, considered ephemera at the time, would go on to be canonized, not just cherished but collected. (Notably, when Marvel started bringing out its own collections of these stories in the ’80s—archival editions, hard cover, fancy paper, fulsome Stan Lee intros—it called them “Marvel Masterworks.”) And for Lee—at least the way he told the story—this wasn’t just hype. It was, in fact, the fulfillment of a long-held artistic ambition.

By his own account, Lee had previously thought of the funny-book business as a way to make a living on the path to writing the Great American Novel. He’d even kept his birth name, Stanley Lieber, away from the four-color books for just such an occasion, preferring to rely on a pseudonym. But when his boss tasked him with writing a book about a team of superheroes to ape the current smash hit on the newsstands, DC’s Justice League of America, his wife, Joan, told him he should put it all out there. And so he did, bringing new levels of sophistication, characterization, contemporaneity, wit, pathos, and cosmic imagination to the business.

Lots of things about the story, polished to a high shine over the years, are left out, most notably the genius of Lee’s co-creator. Jack Kirby was Lee’s senior and, unquestionably at that point, his superior in impact on the medium. With an earlier creative partner, Joe Simon, Kirby had essentially birthed the romance-comic craze of the previous generation. And he knew from superheroes, to put it mildly: He and Simon had come up with Captain America, giving Hitler a sock in the jaw on the first issue’s cover months before the Japanese bombed Pearl Harbor. Kirby had the creative energy and imagination of a dozen artists and the production speed to boot. His constant imagination, creating new characters, settings, vistas, costumes, backdrops, plots, layouts, stories, on a dazzling variety of canvases, would make him the architect of the Marvel Universe.

But—and this is a big but, bigger, sometimes, than some of Lee’s critics will allow—it was Lee who was constantly suggesting, in the public eye, the grander ambitions for comics, even as it was Kirby (along with the Spider-Man co-creator Steve Ditko and a few others) who was creating the work that made those ambitions something less than risible.

Marvel’s early successes led to an aging-up of the audience for superhero comics—not, perhaps, as old as they would be in decades to come, but old enough for a college audience to let Marvel’s offices know that the Hulk was their dorm-room mascot. (The Hulk, another Lee-Kirby creation, was a perfect metaphor for both teenage boys—all testosterone masked up as gamma rays—and Baby Boomers, acting out, laying waste, befuddling their Greatest Generation parents.) They also led to Lee giving lectures at colleges across the nation. One student, a junior at Princeton in the ’60s—perhaps having looked a little too closely at Ditko’s trippy images for the weird worlds visited by the Lee-Ditko creation Dr. Strange—memorably suggested that “we think of Marvel Comics as the 20th-century mythology,” and Lee as “this generation’s Homer.”

Well, maybe. This argument of superheroes as modern myths and contemporary deities has almost as long a history as those CAFKA essays. (If you’re looking for more details about these works’ resonance and heft that are, as we professors say, beyond the scope of this article, encompassing topics such as geopolitical analysis and Afrofuturism, check out the volumes’ introductions by best-in-the-comics-studies-business folks like Ben Saunders and Qiana Whitted.) But the undergraduate had a point, and though he didn’t specify, the Homer in question has to be the one from The Odyssey. After all, the tradition bequeathed to us by that particular classic is the ability to keep telling a story, filled with lots of adventures and monsters, with an ending just over the horizon but never actually achieved. At epic’s end, recall, it’s prophesied that Odysseus must leave home again, setting sail once more.

One of Lee’s achievements—one born of his role as company man and editor of the line, not, or not just, as writer—was to play Odysseus, singing for his supper and making sure the stories went on. And on and on: These volumes offer sparkling forewords by the current practitioners Jason Reynolds, Gene Luen Yang, and Nnedi Okorafor—who have all, in various ways, taken these decades-old characters (Captain America, being a generation older, is closer to a centenarian) and shown how they resonate today. They’ve done so by telling tales that are generally written for older, more sophisticated audiences than those first stories, and that are, for this reason among others, frequently more thematically, intellectually, and characterologically nuanced. And, at the same time, they are in continuity—in the general and comics-specialized senses of the term—with these first stories, building from them, interrogating them, deepening and enriching them. Is classic quite the word for soil that rich? If not, it’s not too far off.

Read: The invisible artists behind your favorite comics

That said, some of Lee’s writing has dated—and grated—the most in these stories. He manifests a jocular comic style borrowed from Catskill shtick that can, at times, feel as broad as a barn door, relationships between men and women torn from the pages of the melodramatic romance comics he used to write and edit (with more than a whiff of standard-for-the-time-but-no-less-regrettable ’60s sexism).

And so the best argument for these particular selections from the archives as classics—in their fullest possible embrace, not just with the fig leaf of “historical influence” or “marginalized genre” or “come on, half the international box office comes from these three characters”—derives from the way in which these stories, in this visual medium, continue to dazzle visually. The pleasures in these volumes alone include, but are hardly limited to, Kirby’s depiction of Wakanda’s technowizardry; the magnificent, shadowy alienation that stalks Peter Parker in Ditko’s forays into territory that verges on noir; and Jim Steranko’s coolly elliptical, erotically knowing, psychedelically tinged images.

Comedy is tragedy plus time, the saying goes, and canon-making sometimes follows the same process, from pulped to prized. J. R. R. Tolkien apparently thought that Oxford’s English department shouldn’t teach anything that was written after 1800; all the recent stuff, he argued, was the kind of thing students could read on their own. Our culture, fruitfully in many cases, has begged to disagree: Institutions such as the Library of America have ushered in writers whose first appearances were in cheap science-fiction paperbacks with garish, painted cover art but have been subject to rapturous critical reevaluation. Who knows? Maybe parents will be insisting that their kids stay up late to read these, and not just under the covers.