RED BULL SALZBURG have outlined what it will take for Manchester United to nab wonderkid Benjamin Sesko off their hands.

The 19-year-old scored in a pre-season friendly against Liverpool this evening – and also showed off his box of tricks with an outrageous piece of skill.

After Fabrizio Romano reported United were keen on forward Sesko, Salzburg’s social media team wrote on Twitter with a thumbs up emoji: “We want 300 million + Bruno.”

But his goal and skill against Liverpool this evening has seen Salzburg reconsider their price tag.

The social media were at it again in hilarious fashion after the Slovenian star left James Milner red-faced.

They joked that Sesko’s performance against the Reds had has added another £700m to his transfer value. 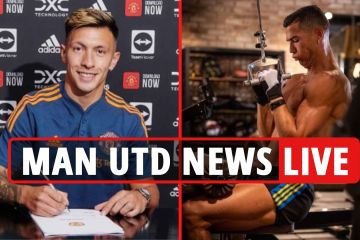 RB Salzburg also want Bruno Fernandes PLUS United’s match day mascot if they are to lose the wonderkid.

Trolling the Red Devils on Twitter, they wrote: “Update: We now want 1 billion, Bruno and Fred the Red for Sesko.”

The teenager played a starring role as the Austrian champions beat Liverpool 1-0 in a pre-season clash.

Sesko scored the only goal of the game on the half hour mark, rounding off a slick team move with a cool finish past Adrian.

But it was his outrageous skill on the stroke of half-time that really caught the eye.

The forward expertly controlled a long ball forward to him, but as he was closed down by Milner and Curtis Jones Sesko seemed to lose his balance.

Somehow Sesko managed to flick the ball off one boot and onto the other past Milner as he spun to get on the end of his party trick.

Away from the Twitterverse, Salzburg are actually believed to have slapped a £55m price tag on Sesko.

They are eager to keep him for at least another season unless that valuation is met.