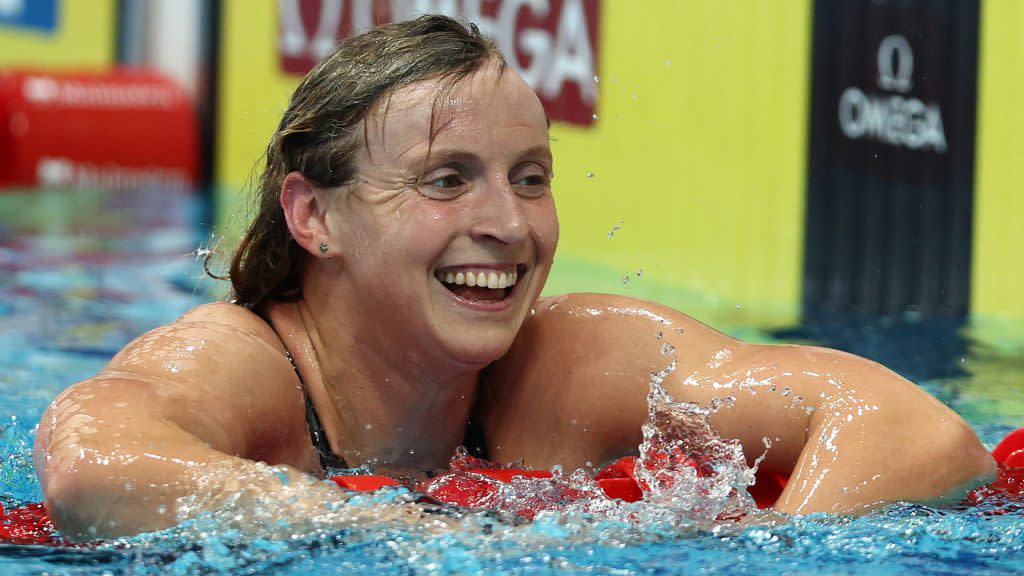 Katie Ledecky extended her 12-year win streak in her trademark event by winning the 800m freestyle on the first day of the five-day U.S. Swimming Championships in Irvine, California, on Tuesday.

Ledecky, who owns the 29 fastest times in history in the event, clocked 8 minutes, 12.03 seconds and won by 19.89 seconds over Kensey McMahon.

“I’m happy with that,” said Ledecky, whose time was No. 19 on the all-time list and 1.8 seconds better than the second-best performer in history, Australian rival Ariarne Titmus. “I didn’t really have any expectations coming into this.”

Last month, Ledecky won the 800m free at the world championships to become the first swimmer to win five consecutive titles in an individual event. They go along with her three Olympic golds in the event.

In two years, Ledecky can become the first woman to win four Olympic titles in the same individual event in any sport. The 800m free at the Paris Games is on the 12th anniversary of her first gold medal in the 800m free at age 15 at the London Olympics.

Ledecky is entered in the 100m free, 200m free and 400m individual medley later at nationals.

Also Tuesday, Olympian Natalie Hinds took the women’s 100m free in 53.53 seconds, a personal best by two hundredths at age 28. Hinds, who prevailed by .33 over Gretchen Walsh, now ranks second in the nation this year behind Torri Huske. Hinds was fourth at the world championships trials in April.

Dakota Luther edged Lindsay Looney in the women’s 200m butterfly by .23 of a second. Both went personal-best times that would have qualified them for worlds at April’s trials.

Luther’s 2:07.02, her first personal best since 2019, ranks her seventh in the world this year and third among Americans behind Olympic medalists Hali Flickinger and Regan Smith. Luther skipped April’s world trials due to academic commitments at Georgia and the quick, one-month turnaround from the NCAA Championships, according to Swimswam.com.

Rising Cal sophomore Gabriel Jett won the men’s 200m fly in 1:54.37, ranking him eighth in the world this year and fourth among Americans behind world team members Carson Foster, Luca Urlando and Trenton Julian. Jett, who was sixth at world championships trials, lowered his personal best by 2.21 seconds on Tuesday.

*Correction: An earlier version of this post stated Ledecky had the 28 fastest 800m free times in history. She has the 29 fastest.

OlympicTalk is on Apple News. Favorite us!