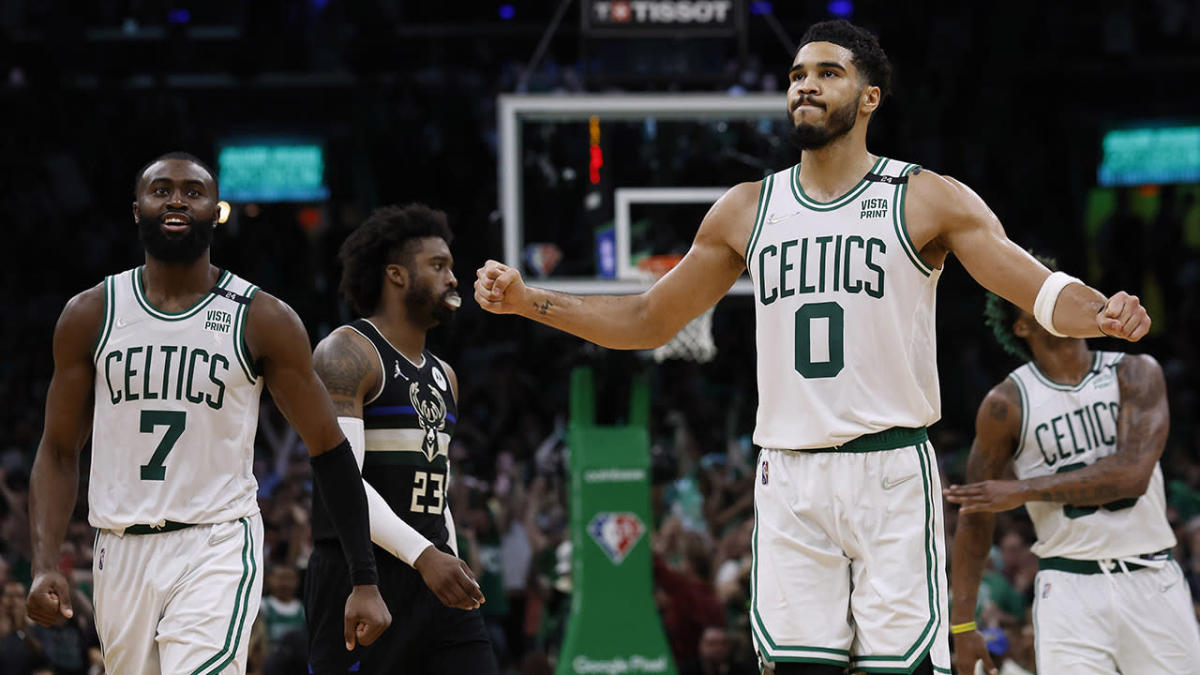 It’s late July and the biggest consternation in Celtics land is whether the team, fresh off a trip to the NBA Finals, ought to trade a 25-year-old All-Star for a soon-to-be 34-year-old former MVP.

Boston, regardless of whether it makes a big-splash deal, is widely projected to win the most regular-season games next season and is the favorite to win the NBA title.

It’s an embarrassment of riches. And, amid the consternation about rumors, it’s probably good to remember just how good this team has it right now.

While hope springs eternal every summer for all 30 NBA teams, few can confidently enjoy the August doldrums knowing their team is truly positioned to compete for a title. The Celtics, if they don’t make another move beyond filling out their depth charts with small-splash additions, have improved. One of the common refrains we heard in Las Vegas from executives was, “If the Celtics had their current roster in June, they would probably be NBA champions.”

Jayson Tatum showed up to a movie premiere in New York on Tuesday night and got peppered with questions about Kevin Durant and rumors of the Celtics pondering a swap involving Jaylen Brown. Tatum adeptly Euro-stepped through the potentially prickly questions and delivered a firm message.

“I love our team,” said Tatum.

He should. The Celtics are set up to be deeper next year, and there will be internal competition that will force a bench unit that stumbled in the Finals to pick up its play. What should be even more exciting to Celtics fans is Tatum and Brown taking another step forward and potentially shuffling even higher in the NBA hierarchy.

You can fret about Al Horford’s age and his ability to maintain last season’s production at age 36. We did the same before he turned back the clock at age 35. You can fret Robert Williams’ health woes, but he gutted out a playoff run on one healthy knee and has still only scratched the surface of his potential. Early odds have him as the favorite to win Defensive Player of the Year.

Marcus Smart thrived as quarterback of the offense last season. Malcolm Brogdon and Danilo Gallinari should give Boston’s bench a veteran jolt of consistency. Derrick White will enjoy more continuity after latching on midstream. Grant Williams and Payton Pritchard have motivation to improve to ensure desired floor time. Ime Udoka should be even more comfortable in Year 2 in the pilot’s chair.

Some will suggest the path back to the NBA Finals won’t be as easy for Boston. We’re not sure we’d say that a Brooklyn-Milwaukee-Miami path was particularly ideal or easy, but certainly the Celtics caught a couple breaks along the way with the Nets’ dysfunction, Khris Middleton’s absence, and the Heat’s offensive inconsistency.

But last season was quite the lesson for these Celtics. This core had already been in a lot of big games, and now they’ve been in a whole bunch more. This team battled in two humongous Game 7s to get to the Finals, where a veteran team showed the C’s what it takes to thrive on the championship stage.

One of the common refrains we heard in Las Vegas from executives was, ‘If the Celtics had their current roster in June, they would probably be NBA champions.’

President of basketball operations Brad Stevens deserves credit for his bold use of draft picks to craft a championship-caliber roster. He’s built a team in which all of the pieces complement one another and are pulling in the same direction. Stevens has spoken repeatedly about the fragility of teams and expressed appreciation for how this group fits together while playing to the style that Udoka desires on both ends of the floor.

Talent is king in the NBA, so it’s understandable that Stevens and his front office crew have to explore all opportunities for elite talent like Durant. Whether Monday’s news of Boston’s offer was just due diligence on the Celtics’ part or the team asserting itself as a legitimate suitor with a willingness to make Brown a centerpiece ought to become clearer in time (though we’d lean heavy towards the former).

Whether there’s a big splash to come or not, the Celtics are positioned to be a title contender for a long time. There are no guarantees in the NBA, but with much of the core in place long-term, there’s no reason to think the Celtics should fade anytime soon.

Not a lot of teams enjoy that luxury. Most teams feel like they’re sort of stuck in the middle. Some swallow hard and hit the painful reboot button. Others are just trying to stay in the title mix without a surefire road map to what comes next.

As the Durant situation highlights, the Celtics have a whole bunch of solid options. And the most desirable one might just be embracing what they’ve already built and seeing if they can get to the finish line of this wild journey with Tatum and Brown as the pillars.