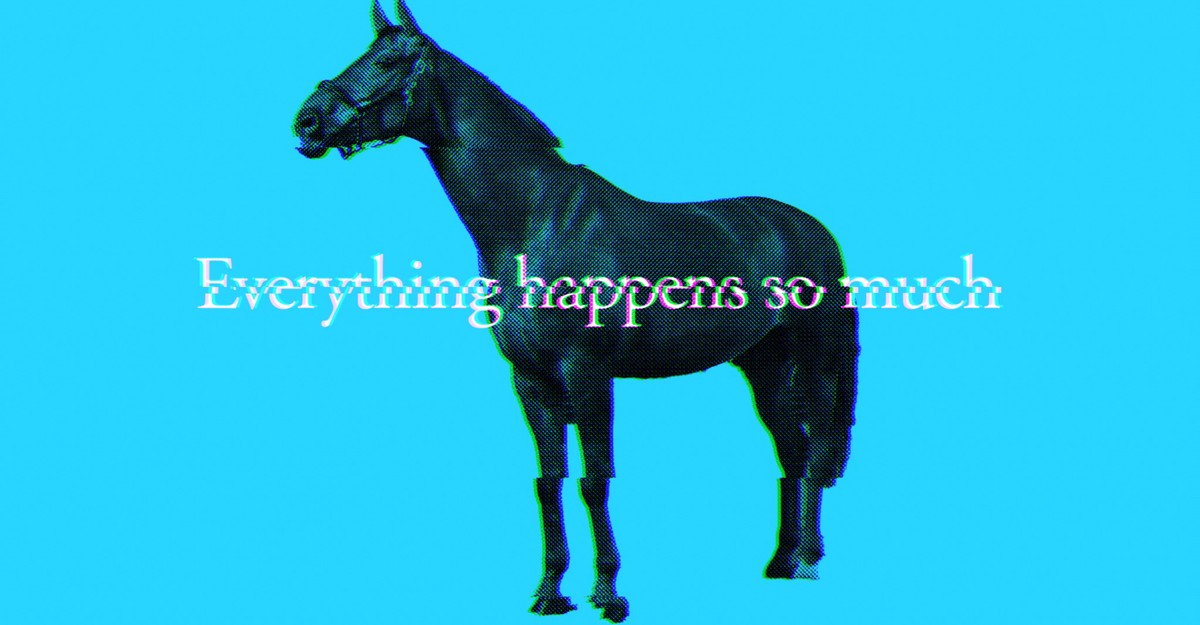 This article was featured in One Story to Read Today, a newsletter in which our editors recommend a single must-read from The Atlantic, Monday through Friday. Sign up for it here.

Though everybody complains about Twitter, no one can deny that it has brought some amazing phrases into our lives—things we can’t imagine having read in any other place, or at any other time in history.

Near the top of any list of the most treasured sentence fragments posted there, the now-defunct account @Horse_ebooks would have several entries. Twitter users still recirculate strange classics like “(using fingers to indicate triangular shape) SMELL SMELL SMELL GOOD NEW NEW NEW slice drink MATCH SPARKLER (thrown in air) STARS STARS STARS.” But the best-known @Horse_ebooks tweet, posted 10 years ago today, was astounding in its clarity and salience. It described both the internet and our entire human world. “Everything happens so much,” @Horse_ebooks tweeted on June 28, 2012.

The tweet was an immediate success, generating thousands of retweets and spreading across the site like a copy-pasted prayer. Its renown has only grown since then. Over the past 10 years, “Everything happens so much” has been turned into a shrine and a site of pilgrimage for those who spend their lives in front of a computer. When the news is not just bad but overwhelming, people search out “Everything happens so much” and reply to it or repost it to their feeds, often with a note like “now more than ever” or “the eternal mood.” These messages acknowledge what feels like ancient wisdom: The absolute best we can say about this moment in time is that everything is happening, as it always has and always will, so much.

The reposts of the tweet provide, in combination, a cryptic catalog of recent history’s most dizzying events. A retweet on January 30, 2017 likely had something to do with President Donald Trump’s immigration ban and the subsequent protests at New York City’s John F. Kennedy airport. One from September 25, 2019, seems connected to the announcement of the first Trump impeachment inquiry. The replies and references to “Everything happens so much” in March 2020 marked the onset of the pandemic, while a February 24, 2022, reply surely commemorates Russia’s invasion of Ukraine.

When the sacred tweet first appeared, it was understood to be the product of an algorithm. The account, @horse_ebooks, had started as a spambot, pulling text from an e-commerce site and posting it as marketing. It developed a following because it was poorly written, and because its random phrases sometimes read like the mystical mumbles of a sleeping fortune-teller. But then in September 2013, just 15 months after “Everything happens so much,” fans of @Horse_ebooks learned the truth: The “bot” had, in fact, been dead for years. In 2011, the account had been taken over and turned into a performance-art project run by Jacob Bakkila, and his friend Thomas Bender. Bakkila had purchased the account from the e-commerce spammer, and started tweeting snippets of found—but carefully selected—text from all over the internet, including instructional e-books and scans of public records. Bakkila told The New Yorker’s Susan Orlean that he couldn’t remember exactly where his most famous tweet had come from, but thought the original context might have been, “Everything happens so much faster when you’re retired.” In chopping that sentence in half, Orlean noted, Bakkila had made it koan-like. “I was trying to wrest wisdom from these wisdomless piles of information,” he agreed.

For many fans, the reveal ruined everything. “We believed we were watching the digital work mutter happily to itself about us, its anxious masters,” my colleague Robinson Meyer wrote at the time. “We thought we were obliging a program, a thing which needs no obliging, whereas in fact we were falling for a plan.” The fact of this disappointment betrays a funny optimism, circa the early 2010s, about the power and promise of passing human intelligence through a machine in order to distill or expand it. By the middle of the decade, we’d figured out what really happens when computers are programmed to make use of wells of human-generated content: They end up spewing hate speech, or collecting invasive amounts of data, or producing racially biased outputs.

But for a time, @Horse_ebooks seemed to be doing just the opposite. It was sifting through our mess of online chatter and transmuting it into aperçus that could be beautiful and oddly true. “Unfortunately, as you probably already know, people,” it said in July 2012. “We all agree, no one looks cool,” it tweeted five months later. And then: “Avoid situations.” Finally, the “algorithm” turned out to be just some guy, whose identity was revealed in coordination with a same-day performance at a Manhattan gallery.

We seem to have gotten over the insult. With time, @Horse_ebooks regained its status as a mysterious source of wisdom and art, and “Everything happens so much” came to be a mantra. Twitter users have called it the “general tweet of the decade” and “the defining text of our age.” It has been used as the title for essays, songs, at least one novel, and an orchestral arrangement. Recently, I emailed Bakkila to ask how he feels about this legacy. “Whenever someone uses a Horse_ebooks tweet from 2012 to respond to the everything that, despite our efforts, continues to happen so much, they’re adding another sedan to the infinite re-re-recontextualized pileup,” he responded. “It’s as good as any way I’ve seen to respond to the shocking future we live in.”

Oddly, our shocking future has ended up producing a moment of renewed wonder at the mystery of machines and their connection to humanity. When a writer tried to reanimate his dead girlfriend with an AI text generator, some found it haunting and beautiful. When a Google engineer became convinced that a company chatbot had become sentient—a conclusion he arrived at “in his capacity as a priest, not a scientist,” as The Washington Post’s Nitasha Tiku reported—that was fascinating, too. OpenAI’s GPT-3 and DALL-E 2 programs, which produce realistic text and images, have enchanted not just nerds, but everyone; the latter was used to create a cover for the current issue of Cosmopolitan, showing a woman in a slim-fitting spacesuit marching toward the viewer. An OpenAI employee, quoted in the magazine, described that picture with stars in her eyes: “That badass woman astronaut is how I feel right now: swaggering on into a future I am excited to be a part of.”

That sentence was published during the eight-week span between the revelation that Roe v. Wade would be overturned and last week’s official declaration that it was. The only response I could muster to reading it was to use the public version of DALL-E, now called Craiyon, to generate nine slightly different images of Carrie Bradshaw jumping off a cliff. At this particular moment, our AI toys aren’t doing a very good job of reflecting us at all. They are just doodling absurdities.

If @Horse_ebooks did share some real, human wisdom, maybe that’s because it had a real, human author. “Everything happens so much” captures the way that horror recurs even as it always feels final. When the Roe decision came down, I was knocked off my feet, even though we knew it would happen and even though it had kind of already happened before, and I was also knocked off my feet that time. The tweet can always be said to describe “this week”; it always makes sense to be “really feeling this today”; and it is constantly the case that it “has never been more true than now.”