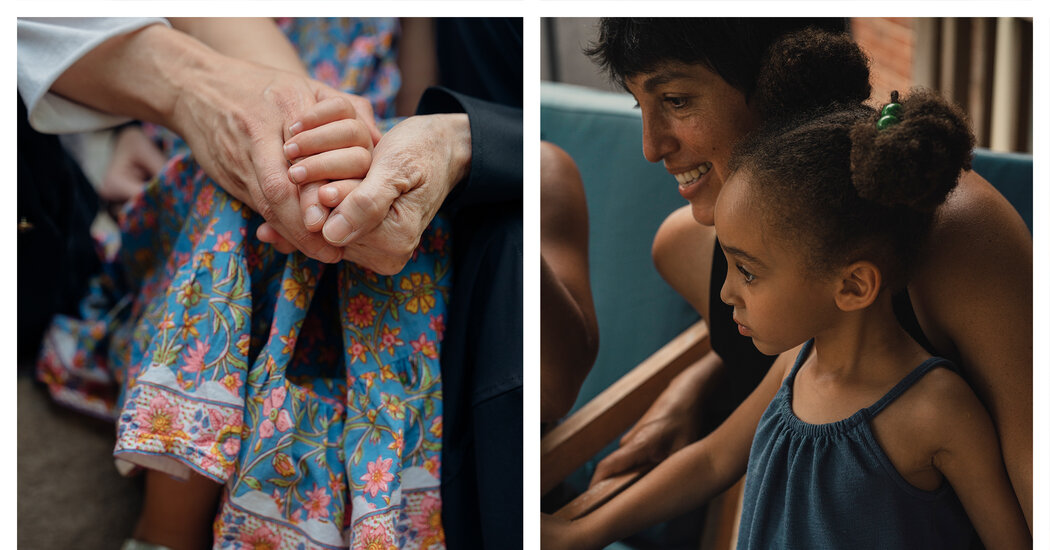 When Lenny Lasater moved to Georgia in her early 20s, it didn’t take long to find her family. She quickly met the Bickersons, a group of queer women scattered across the South who met through mutual friends and banded together. Each Bickerson had given herself a name that started with the letter B — Ms. Lasater eventually became known as “Big Star,” because she was active in the local theater scene and played in a band.

Over the last 35 years, the Bickersons have become a family with its own set of rituals and traditions — fishing trips; holiday parties at a farm in North Carolina; an offshoot affectionately known as “Butch Club,” during which some of the Bickersons could sit around a firepit, sipping Crown Royal and pinky-swearing each other to secrecy.

“We didn’t have to censor,” Ms. Lasater, now 65, said. “We were real, we were honest, and we could expect to be met with compassion and understanding.”

The Bickersons stepped in at a time when Ms. Lasater was barely in contact with members of her biological family. When she was 19, her mother found love letters she had saved from a girlfriend in Tennessee. “I would literally rather see you laying dead in a casket than to know this about you,” Ms. Lasater remembers her mother saying.

She broke off most communication with her family after that, visiting only once or twice a year. They eventually reconciled, but Ms. Lasater said she never felt fully connected with her mother, who died in 2020.

Ms. Lasater lists members of the Bickersons as her emergency contacts. Maybe, she muses, they’ll form a retirement community together; for now, she’s grateful to them for stepping in where her birth family did not.

In the L.G.B.T.Q. community, it’s not uncommon to find a substitute family, colloquially known as a chosen family, as Ms. Lasater did. The term refers to “nonbiological kinship bonds that many people choose because they need to have mutual support and love,” said Trevor Gates-Crandall, a social worker in Colorado who has researched chosen families. The relationships these groups provide are critical bonds, defined by their intensity, he said.

“Many times, of course, people are drawn to chosen families because they’ve experienced rejection from their families of origin,” Mr. Gates-Crandall said. “Chosen families allow them to create the families that they want.”

The Times spoke to some of the members of five chosen families about how they found a sense of hope, and home, in one another.

When Michael and Calvin Cruz decided to adopt a child in 2005, they knew exactly whom to ask for a letter of recommendation: Ted Sod and his husband, Burke Pearson.

Michael, an aspiring filmmaker, had reached out to Mr. Sod about a production assistant role on his film “Crocodile Tears” a decade earlier, when they lived in Seattle. Mr. Sod became more than a mentor — they drove to the International AIDS conference in Vancouver, British Columbia, together belting out show tunes; they started to spend holidays together. By the time Michael met Calvin, on the dance floor of a gay bar in Seattle, Mr. Sod was the person he sought out for relationship advice.

Calvin and Michael moved from Seattle to New York, and Mr. Sod and Mr. Pearson moved to New Jersey; the two couples saw each other frequently. “They were the closest we had to parents on the East Coast,” Michael said.

They all assumed the adoption process would take at least a year. Three weeks after they submitted the paperwork, Calvin and Michael got a call — there was a woman who was due in a month, and she wanted to meet them.

Michael’s mother died when Vivien was almost 2; Calvin’s mother died before he even met Michael. Both of their fathers, they said, “were not really in the picture” — Michael’s abandoned his family when he was a young adult, and Calvin’s father reaches out only every few years. They took comfort in knowing they could rely on Mr. Sod and Mr. Pearson for support and safety.

In the spring of 2016, Emma Ruby-Sachs went on a three-day retreat for nonprofit leaders in Los Angeles. She felt an instant connection to one of the leaders there, Angela Ferrell-Zabala; as the women chatted, they learned their 1-year-old daughters were born a day apart. They became fast friends, and a few months later, Ms. Ferrell-Zabala, her wife, Fernanda Ferrell-Zabala, and their children went from Washington, D.C., to visit Ms. Ruby-Sachs and her wife in Chicago.

They were at a nearby park, watching their daughters hug and cling to each other, when Ms. Ruby-Sachs and Angela started talking about their fertility journeys. They realized they had used the same sperm bank. Then Ms. Ruby-Sachs paused. “Wait a second,” she remembers saying. “Who’s your donor?”

It turned out that the couples had used the same sperm donor, Ms. Ruby-Sachs said, making their daughters biological half-siblings. The coincidence seemed out of a movie, otherworldly. Ms. Ferrell-Zabala said she was so overcome with emotion that she burst into tears.

Over the last few years, the couples and their children have visited each other, flying across the country to howl “Encanto” songs for hours out of a karaoke machine, or to outfit the girls in matching jean jackets. They try to see each other several times a year, turning to FaceTime or Zoom when travel isn’t possible. The children refer to each other as siblings, a bond their parents hope they carry with them throughout their lives.

“I came out at a time where we had to create our own architecture and infrastructures, community and family and trust as queer people,” said Jane M. Saks, 60, who is Ms. Ruby-Sachs’s wife. “I always talk about living a queer life, and this is an extension of that — the freedom of queerness. Being able to create our tribe.”

‘I can’t imagine my life without her’

Alison Gerig met Nina Moreno in graduate school at Columbia University, where they both studied to become social workers. It was 1996, and Ms. Gerig, who had just started to come out, was drawn to how confident and open her new friend seemed. They stayed close even as Ms. Moreno moved to San Francisco and Ms. Gerig settled in Philadelphia. Five years later, Ms. Moreno returned to the East Coast to finish her dissertation and ended up moving in with her friend in a new home in a different part of Philadelphia. Ms. Gerig had decided years earlier that she wanted to have a baby on her own, and she got pregnant a month after Ms. Moreno moved in.

In their new neighborhood in Philadelphia, Ms. Gerig reconnected with Bia Vieira, whom she had met through work years earlier. After a few months, Ms. Gerig set Ms. Vieira up with Ms. Moreno. They quickly became a couple, and together, they helped support Ms. Gerig through her pregnancy — concocting breakfast juices to take her in the morning, checking in on her doctors’ appointments.

When Ms. Gerig went into labor, Ms. Moreno drove her to the hospital and was in the delivery room with her, comforting her friend and urging her to push. Ms. Gerig gave birth on the birthday of Ms. Vieira, who also came to the hospital. “That really sealed it,” Ms. Gerig said.

Eventually, Ms. Moreno and Ms. Vieira moved in together, and then back to California. But the family have maintained their bond. They’ve traveled back and forth to each other’s homes, to North Carolina, and to Provincetown, Mass., after keeping one another awake on the seven-hour drive from Philadelphia by talking about what food they wanted to eat. They FaceTime each other multiple times a month. “She’s the first person I certainly call when something big is happening,” Ms. Moreno said about Ms. Gerig. “I can’t imagine my life without her.”

When Milton Justice, Jack Heifner and Garland Wright met in their freshman year at Southern Methodist University in Texas, hardly anyone was out as gay. “It was considered amoral behavior,” Mr. Justice said.

“I was always living a double life,” Mr. Heifner added.

It was 1964, and they all eventually transferred into the university’s theater department, where they found a niche of like-minded aspiring actors, playwrights and set designers.

“I don’t think anybody could ever imagine the relief of having friends you could talk to about anything,” Mr. Heifner said. “If you were having boyfriend problems, you certainly couldn’t talk to your parents about it. Any kind of problems — there was no one to talk to but each other.”

After they graduated, the three of them moved to New York, where they rose through the ranks of local theater. They bought a house together in the Hamptons, where they would stay up until the morning playing a French card game called Onze. Twenty years later, as Mr. Wright was battling cancer, Mr. Heifner and Mr. Justice went to his apartment and played that same card game. “That was forged a long time ago,” Mr. Heifner said. “That sense of caring for each other.” Mr. Wright died in 1998, at the age of 52.

Now in their mid-70s, Mr. Heifner and Mr. Justice have continued to care for each other. They both still live in New York and see each other often; before the pandemic, they had Christmas together every year.

“What do you want from a family? You want someone who lets you be who you are,” Mr. Heifner said. “When we finally met each other, it freed us.”

It was on the first of several Florida fishing trips, in 1987, that Mendy Knott suggested she and her four friends from Atlanta start calling themselves a family. It was a joke at first, Ms. Knott, now 68, said, but as the years went by, the importance of that moment grew clear. The name they chose for themselves, the Bickersons, came from a 1940s radio program about a squabbling couple they liked. Each member of the family got a nickname that started with a B to match: Barracuda, Bass, Buttercup, Ball Game, Brains, “Bad-Enuf,” Baklava. Ms. Knott became Bubba.

Over the years, the Bickersons swelled from the original five members to almost 50. Now, the core group is around 10 to 20 members, most of whom live near Asheville, N.C.

“We just started adopting close friends,” Ms. Knott said. They have hosted New Year’s Eve parties with gumbo and chili and raucous Thanksgivings; they have helped one another get sober; and attended one another’s parents’ funerals, sending flowers, cards and food when they could not show up in person. They throw one another birthday parties. One 40th celebration lasted for three days. At one point, the Bickersonswould take turns and all gather to work on one Bickerson’s home each month, putting up fences or chopping wood to power stoves.

“We’ve gone from being young bucks to the elders of our own communities,” Ms. Knott said. “A lot of us never expected to live this long.”

In the early 2000s Cherry Omega, also known as Big Daddy Bickerson, developed cervical cancer. The Bickersons drove her to and from hospital appointments; Ms. Knott, the daughter of a pastor, signed on as Ms. Omega’s spiritual adviser. Another Bickerson served as her hospice nurse, and another handled her legal affairs. They rented a house for her outside Asheville, where people trailed in from across the country to visit Ms. Omega during the last six weeks of her life. She was surrounded by Bickersons when she died in 2005. They commissioned urns from a local lesbian potter, a large urn and 10 smaller ones, which were distributed among the chosen family’s members, each of whom scattered her ashes across cities she had lived in and loved.

“Just like any family, we’ve had triumphs, we’ve had heartbreaks,” said Rebecca Buchanan, also known as Buttercup, who joined the Bickersons in her early 20s and recently celebrated her 50th birthday with them at a campground near Ms. Knott’s farm. “We figure it out together.”