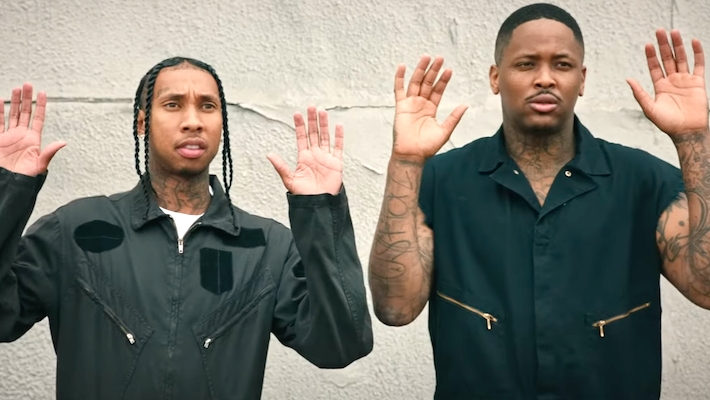 It’s very possible that YG could give us his third project in as many years with the impending release of his sixth solo album. He concluded 2021 with the release of “Sign Language,” accompanied by a sunny video strapped with lowriders. After that, he returned alongside J. Cole and Moneybagg Yo on “Scared Money,” a track he later performed with the latter rapper on The Tonight Show. There’s no word on when YG’s sixth album will arrive, or even what it will be called, but we’re taking one more step towards it with his new single “Run” which places YG alongside Tyga, BIA, and 21 Savage.

On the new track, the four rappers speak about their mischievous lives while flexing their flashy spending and partying habits. In its matching video, YG and Tyga appear as a notorious criminal duo known as the Calabasas Sisters. They rob and bank away and make a run for it as BIA and 21 Savage help to make sure that their getaway is successful.

YG’s latest track arrives after he teamed up with Mozzy for their collaboration project Kommunity Service last summer. That project was a brief one with just ten songs but it also flaunted appearances from Blxst, Ty Dolla Sign, Young M.A, G Herbo, A Boogie Wit Da Hoodie, Tyga, and others. As for YG’s last solo project, that arrived back in 2020 with My Life 4Hunnid, a 13-track effort strapped with appearances from Lil Wayne, Chris Brown, Tyga, Lil Tjay, Ty Dolla Sign, Lil Mosey, Calboy, and more.

You can check out the video for “Run” above.