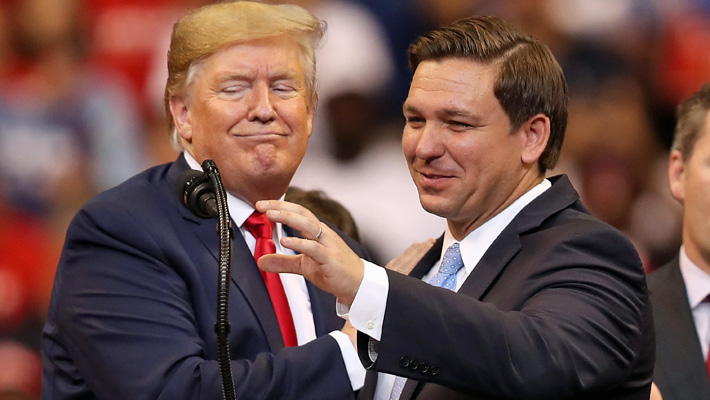 Not to jinx it, but it appears the Republican Party might — or maybe might not! — be finally moving away from Donald Trump. He no longer has the golden touch; the Jan. 6 hearings have already caused at least one Republican congressperson to formally ditch him. The face of the party may instead be Florida governor and professional bully Ron DeSantis. And De Santis knows he doesn’t need one of Trump’s once-coveted endorsements to go even bigger.

As per Politico, DeSantis is up for reelection in November, which he’s not that worried about: He has plenty of campaign cash and scores of Republicans in his state. Not even picking a fight with the state’s largest employer seems to be dinging his armor. Sources say he’s feeling so confident that he hasn’t sought Trump’s endorsement and has no plans to do so.

If true, it seems De Santis is stepping up a beef that’s already one of the biggest in today’s GOP. DeSantis has been stealing Trump’s old donors, who are fleeing in part because of the shocking revelations unveiled during the Jan. 6 hearings. He’s already become the GOP frontrunner for the 2024 presidential run, which might also see them squaring off against Mike Pence, making for some awkward campaign trail run-ins with the guy who was okay with his supporters killing him.

So get ready, because the “Don’t Say Gay” guy could wind up in the White House. Hey, stranger things have happened.