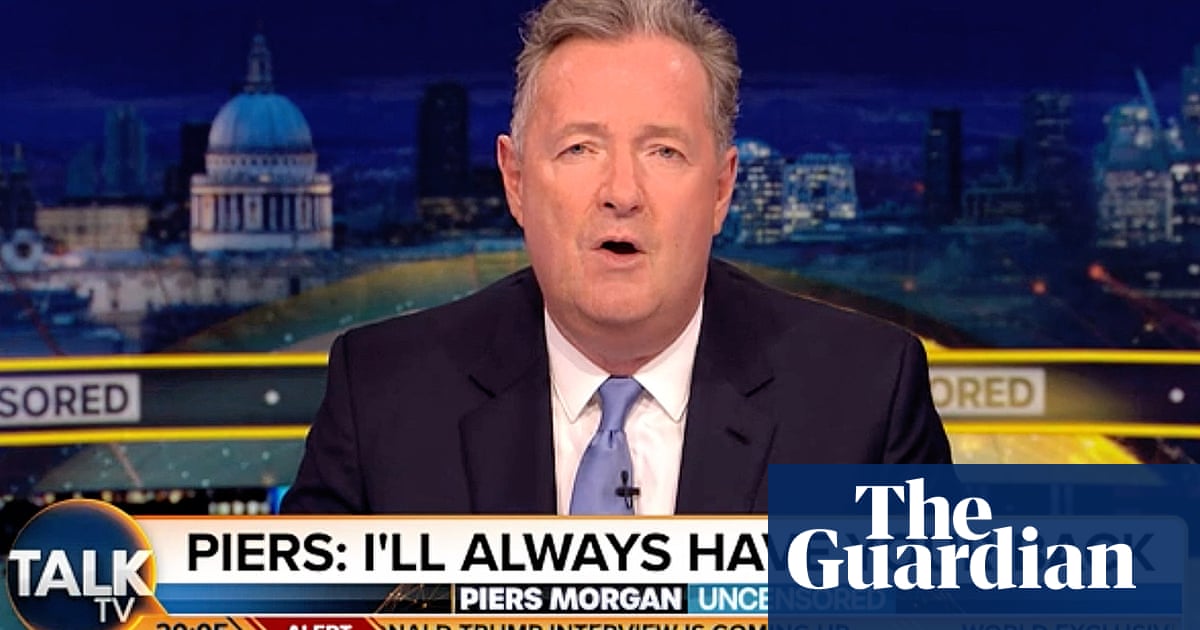 Rupert Murdoch’s talkTV has been struggling to attract an audience for its culture-war output. But staff at the channel are now worried that they have recently gained one particular viewer: Murdoch himself, who has arrived in London and is taking an active interest in his station’s fate.

The media mogul has invested tens of millions of pounds in talkTV, but after just two months on air, there are fears it could become a costly disaster unless he makes a rapid intervention, with official viewing figures dipping to zero at some points during evening broadcasts.

On Wednesday, the company appointed former Daily Mirror editor Richard Wallace as the channel’s boss ahead of an expected relaunch, which followed a senior behind-the-scenes executive quitting last week and Fox News staff being deputised to help sharpen up the channel.

The company has plastered presenter Piers Morgan’s face on billboards across the country, but his monologues and rants about woke culture – including an attempt to skewer rail union boss Mick Lynch for using a Thunderbirds baddie as his Facebook profile picture – have so far failed to resonate with audiences.

On Monday night, the flagship Piers Morgan Uncensored attracted just 64,000 viewers. Programmes that beat him in the same time slot included a documentary about the water around Alcatraz on the National Geographic channel and a repeat of 1970s sitcom The Good Life on Gold.

According to sources at talkTV, Morgan has suggested Murdoch should make a blowout bid to hire his former Good Morning Britain colleague Susanna Reid for talkTV. Reid’s agent did not deny that discussions had taken place, but declined to comment further. There is no indication that Reid is poised to leave the ITV breakfast show, although she has been off air in recent days.

More embarrassingly, Morgan is being consistently thrashed in the ratings by ex-Ukip leader Nigel Farage on GB News. The rival rightwing channels are fighting over the same relatively small pool of viewers, but so far it looks as though GB News – despite its own disastrous launch – is consistently coming out on top by appealing to a small core British audience rather than aiming for wider appeal.

Both outlets are reportedly currently financially unsustainable, with questions over their long-term future. GB News secured funding from a range of overseas investors for its first three years, but one major shareholder, US media company Discovery, is now understood to be looking to exit.

As a result, the company needs new shareholders willing to suck up the cost of running a loss-making, ad-funded channel with a recession looming. Sources at GB News said both its HR director and commercial director have left in recent weeks.

This has led to speculation that Murdoch could choose to cut his losses, buy GB News, and unite the channel with talkTV. He has form for such ruthlessness. In the early 1990s, soon after it launched, he took his heavily loss-making Sky satellite broadcasting service and merged it with the similarly stricken rival British Satellite Broadcasting to create BSkyB.

A News UK spokesperson played down the prospect of such an outcome and said they were happy with the current outlook for talkTV, while GB News said it was not aware of any talks.

Instead, in a bid to revive viewing figures, talkTV has increasingly starting splashing the cash on guests. One leftwing journalist was begged to come on air to be grilled by Morgan; the talkTV guest booker made ever increasing offers, which could in the end have earned the individual thousands of pounds for a few minutes’ work. The person declined.

Mid-level celebrities and people briefly in the public eye have been delighted to earn over £10,000 for appearing on Morgan’s show.

Despite the availability of hard cash for people who are willing to be a punchbag for Morgan’s rants, there have been few of the breakout viral moments that characterised his earlier stint on Good Morning Britain. Staff at talkTV reported enormous delight when a trans activist swore at Morgan on air and walked off the set because clips of the incident lit up Twitter.

talkTV has lost some senior staff, with more predicted to follow – either for opportunities elsewhere or as part of a forthcoming clearout and relaunch. Vivek Sharma, the channel’s executive producer, who was a veteran of ITV’s daytime lineup, quit last week for a new job. There has been substantial involvement of staff from Murdoch’s US Fox News channel to try to train presenters and fix problems with the output.

One particular issue is talkTV’s dual identity as a big-budget channel bolted on to an existing radio station, talkRadio. The vast majority of talkTV’s output consists of filming shows that were already broadcasting on talkRadio, which had attracted a loyal audience on a small budget.

This has led to growing tensions between the two teams, with the radio staff feeling they are being let down by their high-spending TV colleagues. One irate member of the old talkRadio team pointed out that while the station’s bosses have issued press releases claiming Morgan’s show is a global success on social media platforms, it is the old talkRadio content – such as interviews with conspiracy theorist David Icke – that dominates the most-viewed list on YouTube.

Still, talkTV continues to invest in new staff, with job roles available for an additional forthcoming 10pm television show. Jeremy Kyle is due to host a programme now that the public outcry over a recent documentary about his former daytime TV show has died down.

Murdoch hosted his summer party at the Serpentine gallery in London on Monday night, where the guests included the prime minister, Boris Johnson. He has already watched first hand as one of his newspapers, the Times, became embroiled in a row about deleting a story without explanation. Staff at talkTV are hoping they aren’t part of a similar vanishing act.