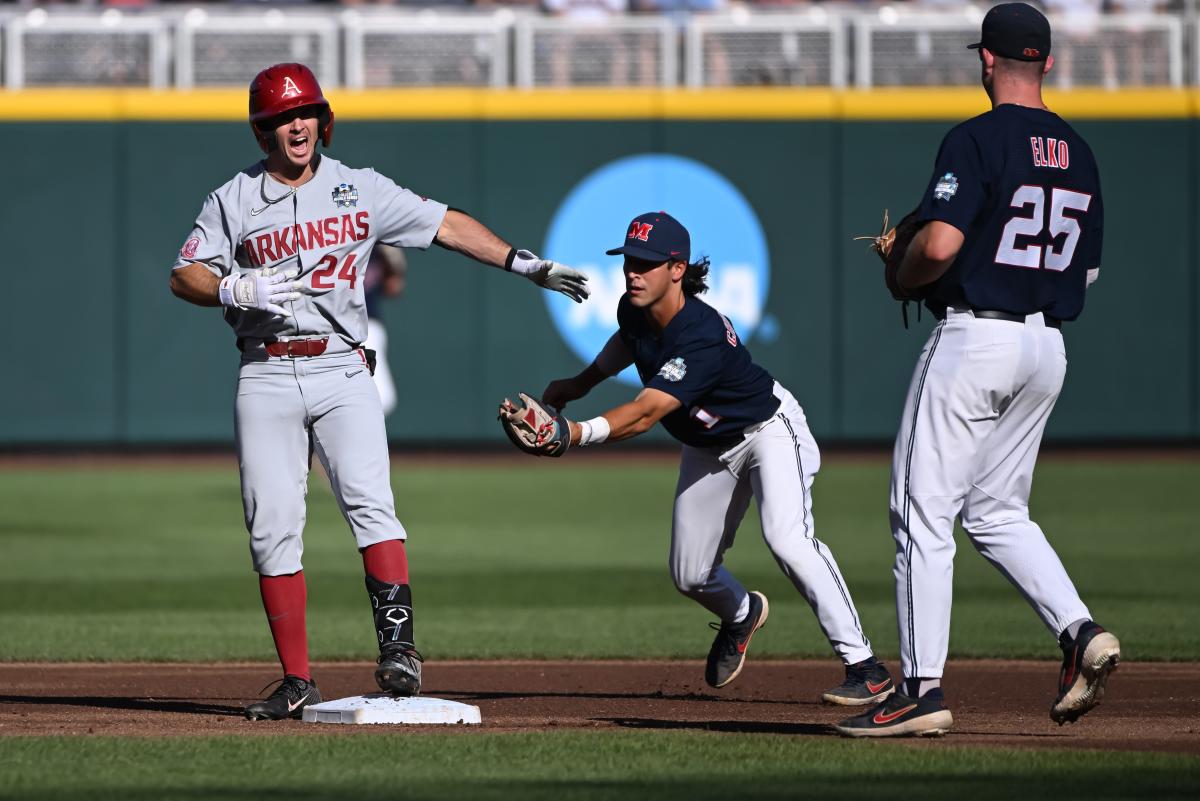 The Rebels will face Arkansas on Thursday in a winner-takes-all College World Series elimination game after losing 3-2 on Wednesday. The winner advances to the championship series against Oklahoma, beginning on Saturday, and the loser heads home for the offseason – finishing three wins short of a national championship.

Arkansas’ history is littered with these kinds of games. Though the Razorbacks have never won a national championship, they won semifinal games in 1979 and 2018 to advance to the championship and lost do-or-die semifinals in 1985 and 2012.

Ole Miss, meanwhile, hasn’t been in this position since 1956 in a College World Series that included teams from five conferences that no longer exist.

Both teams are throwing their aces; Ole Miss is giving the ball to junior righthander Dylan DeLucia and Arkansas is calling on senior righthander Connor Noland. Ole Miss will have its top arsenal of relievers available, while Arkansas might have to resort to some of its back-end arms if Noland can’t throw for length. And both teams have strong offenses that have shown the ability to feast on bullpens all postseason.

Here is the Clarion Ledger’s scouting report and prediction for Thursday’s game.

DeLucia has been excellent this postseason, owning a 2.33 ERA with 31 strikeouts in 19⅓ innings. Frankly, he’s been excellent as a starting pitcher, posting a 2.85 ERA in 66⅓ innings across 11 starts.

Put another way: DeLucia’s ERA as a starting pitcher on regular or long rest is 2.39. His ERA on short rest is 7.50, albeit in a small sample.

Give Ole Miss’ pitching staff credit: Arkansas is averaging 10 runs per game in the NCAA Tournament against teams that aren’t Ole Miss but only has seven runs in two games against the Rebels. With Brandon Johnson, Josh Mallitz and Mason Nichols fully rested for Thursday, Ole Miss should be able to put together a patchwork game plan and only need three or four quality innings from DeLucia.

Advantage: DeLucia’s track record on short rest is scary. Don’t expect things to go as poorly as they did against Texas A&M, but against this Arkansas lineup it might be tough to extend. Give the Hogs the advantage.

Noland hasn’t started on short rest this season, so it’s hard to guess how he’ll fare. He threw as a reliever on one day rest in the Stillwater Regional and was crushed for three runs on two hits while recording one out. But there’s a big difference between recovering from 79 pitches in four days and recovering from 89 pitches in one day.

If there’s any built-in advantage Ole Miss might have, it’s that Arkansas may have exhausted its quality lefthanders. Noland throws with his right hand and the Razorbacks used southpaws Hagen Smith (90 pitches), Evan Taylor (31 pitches) and Zack Morris (15 pitches) on Wednesday.

This season, Ole Miss is hitting .246 against lefthanded pitching and .294 against righthanded pitching. The Razorbacks’ only lefthander who didn’t throw Wednesday is Nick Griffin, a freshman who hasn’t pitched since May 3 and who didn’t appear in any SEC games this season.

Advantage: Noland is a tough pitcher to crack. There’s a reason opponents bat .250 against him and he has 106 strikeouts. If Noland works long, the Razorbacks have a huge advantage. If the Rebels can get to Arkansas’ bullpen, Ole Miss will be in business.

It’s a battle of the unknown with Noland against the known with DeLucia. Maybe DeLucia bucks the trend and turns in another legend-worthy performance. Especially with the bullpen arms he has ready behind him, he shouldn’t need to throw more than four quality innings to keep the Rebels alive.

That all can happen. It just doesn’t feel like the likeliest outcome. Ole Miss falls behind early and chips away late, but the Razorbacks have a little too much offense and Noland does enough to get the Hogs back to the College World Series final.