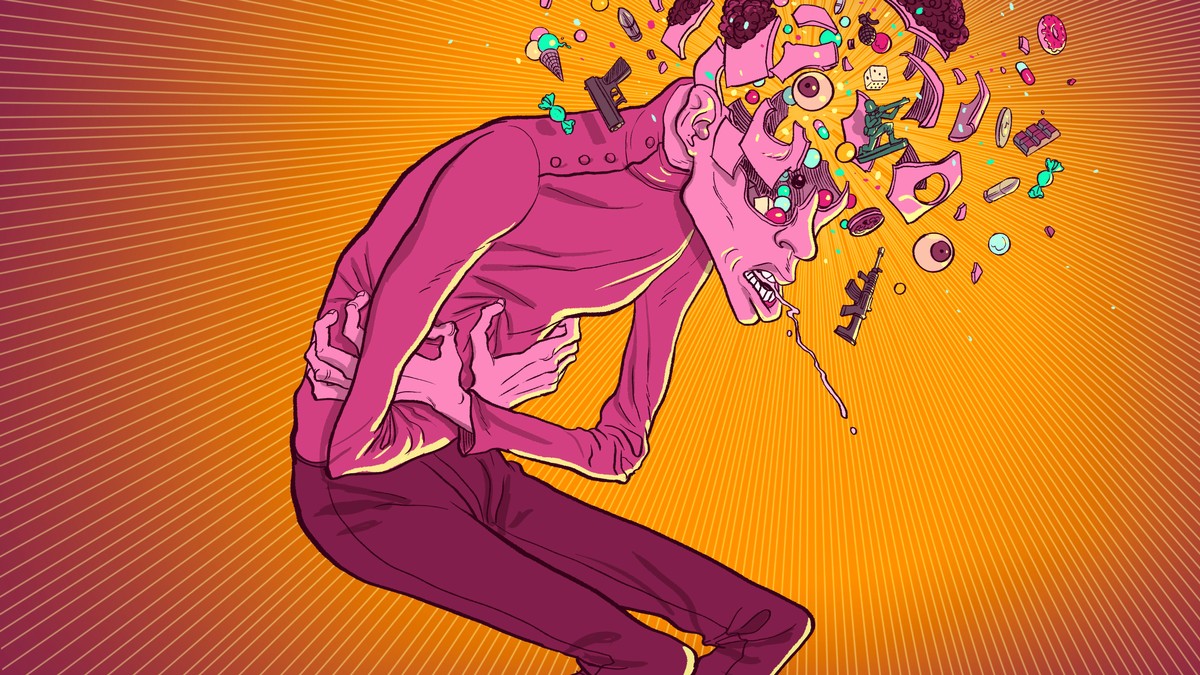 Terraform is back, and for our first entry we’re celebrating with a piece from one of our favorite collaborators—you can always count on Russell Nichols’ futures to be exceedingly dark, surreal, and absurdly satirical. This one, about, among other things, the art of consuming news in the age of mass violence (Nichols cut his teeth as a reporter, it might be noted), is no different. Enjoy. -the eds

It was light and fluffy, I remember. The wafer dissolved on my tongue, details filling in: the who was killed, the how and where. I stood there, beside the touchless kiosk, taking in the experience. My first. After weeks of swearing off these 3D printed cookies, I finally bit the bullet. So to speak.

“It’s an acquired taste,” a man whispered behind me.

I turned around. The subscriber looked vampiric, wearing wraparound shades and holding a white umbrella on that bright, clear day. He was standing way too close for my liking.

He took a big step back. “I didn’t mean to disturb you, but you looked … disturbed,” he said, “so I figured you might be new to this … way of news.”

He nodded, then approached the kiosk, waved his hand in front of the screen to order his topics. You could choose what you wanted: top stories, sports, international, comics, real estate, obituaries, etc. When finished, the vending machine-like kiosk hummed, then printed out your customized wafer. Paper-thin. The size of a quarter. Certified organic.

Something about the man bugged me. Maybe that umbrella. Or the way he held up his fresh wafer, as if giving a toast to me, and bellowing out: “Bon appétit!” Taunting me before he disappeared into the busy square. Or was he just trying to be friendly? Maybe the subtext was all mine. Projection. Deflection. Guilt. Why? Because I caved. I had succumbed to this uncivilized method of consumption. A former reporter made obsolete by the very thing of which I now partook.

And I wished I could switch it off, the urge. That need to be “in the know.” But in this world, the absolute worst thing you could be was uninformed. The unfed, they were called. Empty vessels with no sense of perspective. A gross lack of awareness. They couldn’t get jobs, couldn’t get laid, couldn’t get a doctor’s appointment to save their lives. To be unfed was to be banished to the crumbling, stale edges of society. Blissfully, ignorantly subhuman.

But not I! From the harrowing pit of my unemployment, I swallowed pride and ate the wafer. And the worst part was I didn’t despise it. How could I? The sweet, sweet flavor made the bad news go down easy. In sixty seconds, I knew all I needed to know about current events. Indeed, I was informed once again. I even found myself looking forward to tomorrow.

But that night, alone in my private room, I woke up around eleven with the sharpest pain. Something stabbing me in my stomach. Stumbling to the toilet, I poked back at my tonsils with my black fountain pen, triggering this mostly formless, but never-ending whitish vomit.

“What did you eat?” asked the doctor that night on a virtual call.

I hadn’t eaten much, I told her without going into details about my financial straits. But I did admit to having my first news bite earlier. As a new subscriber, I now had access to healthcare services, so I consented to the remote ultrasound. But she saw nothing out of the ordinary.

“Why don’t we take a break from the news bites,” she said. “Just for a few days. I doubt that is the issue, but just in case, okay? Keep me informed.”

How could I take a break from something I just started? I couldn’t just go back to being unfed. That feeling of knowing, it was too enticing to deny. So the next morning, I stood at the kiosk, waved in my order. Maybe I overdid it that first time. Instead of picking six topics, I selected only top stories. I took the wafer. Let it dissolve. More info about the shooting. The aftermath. Facts about the killer: How he was one of those extremely rare boys who grew up in a broken home, got bullied at school, played video games to cope, but felt disconnected. A lone wolf with little self-worth plus anger issues.

I saw Umbrella Man stop by to collect his wafer. He didn’t see me. Or if he did, he didn’t try to engage this time, which I was grateful for. I spent the rest of that day scanning for jobs and forgot about the news. But that night, I was again seized by excruciating stomach pain that made breathing difficult. The discharge of colorless vomit kept coming out, over my fingers, over the floor, all over the place. But the doctor couldn’t know of my defiance, so I didn’t call. The bathroom remained my bedroom.

In the days that followed, I took the wafers home to experiment. I blended it to make a smoothie, chopped it up, mixed with yogurt, fried it, put it between slices of sourdough, pan-seared. Same news (filibuster derails major climate change initiative, clinic bombed, another shooting), different flavors (mint, cherry, spicy cinnamon). But the stabbing in my stomach wouldn’t stop.

Then: I had the idea to melt the wafer down and swish it around my mouth—like oil pulling—before spitting it out. This helped. Not completely. I still felt some nausea, but the pain was diminished. Unfortunately, so was the information. My brain couldn’t absorb the full stories. I received only tidbits. Morsels. Fractions of facts that kept me fractionally informed.

Out in the world, I feared people would call me out for being so-called counter-fed. That some random in the street might pop quiz me to test my knowledge of world wars or crashing markets or mandates gone wild or some other cotton candy-flavored crisis.

How does one stay informed without getting sick? I asked myself this question, over and over, lying on the floor by the toilet. The hunger was unbearable. The craving for facts. Not half-baked facts, but cage-free, whole truths that tasted like a perfectly cooked ribeye steak.

And right then, I knew what needed to be done.

I woke up early that next morning, put on the dark suit I used for job interviews and darted out. The kiosk in the square was crowded, which was typical during rush hour. But I was in no hurry. I kept my distance. And waited. It was nearly noon when I saw the umbrella, white as an elephant tusk, looming over the heads of hungry subscribers. I watched him in line, engrossed in a game on his mobile device after his awkward attempts at small talk proved futile.

He was trying to be friendly. I could be a friend.

“You got a favorite flavor?” I asked.

He turned around. “You?” He rubbed his neck. “I thought you disappeared. Flavor, you ask? Well, that varies depending on … certain variables. It’s all in the pairing.”

“Yes, the key is contrasts. For instance, I want my big, bad disaster stories to taste comforting. Like buttered popcorn. But I want my comics and celebrity gossip to be a little bitter like a sour apple.” He leaned closer to me and whispered: “Like I always say, the sexiest position is juxtaposition.”

I moved away before he could continue. Not too far. Just to see him without him seeing me. The man collected his wafer, then walked off. And I followed him from the square, down to the train. Tracking Umbrella Man took me back to those erstwhile days as a reporter, armed with a notepad and my black fountain pen. All the sources I tailed for a scoop. Long before headlines were edible.

Twenty minutes later, he approached a high-rise on the north side. Before entering, he collapsed the umbrella and turned around, startled to see me. “Did you … follow me?”

“I was trying to catch up with you. Thing is, I’ve been having some trouble keeping it down. The news bites, I mean. Given your expertise, I thought you could tell me what’s going on?”

“Isn’t that the loaded question of the century?” He turned away. “I can’t do anything for you.”

I’d been a reporter long enough to know every person on this planet wants to feel seen. Useful. Significant in some way. So I presented him with the two key words I knew would get me in the door. So to speak. “Teach me.”

Minutes later, I was standing in the living room of his single sub-level unit, surrounded by many monitors, stray computer parts and what looked like a tricked-out fax machine.

He motioned for me to sit on his couch. “Digestive issues, you say?”

I told him I wasn’t sure. All I knew was every time I took a wafer, my stomach hurt like hell that same night. I wasn’t eating much else. He nodded, as if he knew all this.

“How did you deal with it?”

“Sensibly.” He pulled a wafer out of his pocket. “I abstain.” Then flushed it down the toilet.

I was so confused. But thinking back, I realized I’d never actually seen him eat a single wafer. He ordered it, collected it, even toasted me with it, but never once did I see him eat it.

“I only order them now to keep my subscription active,” he said, returning from the bathroom. “For the healthcare. But I prefer to make my own.”

He connected the fax machine. Pressed some buttons on the keypad. The machine gurgled, then printed out a wafer. He picked it up and kissed it before setting the cookie on his tongue. I was shook. It took him six months to reverse engineer, he explained without really explaining anything.

“But where are you getting your information?” I didn’t understand. “Who are your sources?”

And without blinking, Umbrella Man said: “I am my sources.”

It was the way he said it, with a kind of supernatural conviction, that made me lunge at him and stab him in the trachea with my black fountain pen. I used a couch cushion to block the spurting blood. He kept squirming. He kept trying to speak, but the words became wheezes, which had no substance. And I had no mercy. Was I mad? The thought — among a barrage of thoughts — had occurred to me, as I pushed my weight against his writhing body. I’m not a killer. And despite the man’s indefensible, indigestible modus operandi, my actions had nothing to do with journalistic integrity. I was just hungry. And I refused to be unfed.

As I started cutting open his scalp, I pondered if the information he held would transfer to me. Like a baby in utero. His views, no doubt, would be distorted. Diluted. Boiled down into some baseless soup of partial truths. But self-made, anti-news was better than no news, right? I stopped cutting to consider the question. The next thing I felt was an umbrella shaft cracking me over my head.

The following morning, I woke up in here.

“You got any news bites?” I asked one of the correctional officers.

He told me to shut the hell up. Moments later, he came back with a wafer. I didn’t ask what topics he ordered. I lay on the bottom bunk of my cell, put the cookie on my tongue and let it dissolve. With my eyes closed, I digested the daily news: hurricane watch, assault allegations, another shooting. And what was this? It was me. I could taste myself: former reporter arrested for attempted cannibalism. There was no flavor. But the good news was, I didn’t get sick. In fact, I didn’t feel anything.