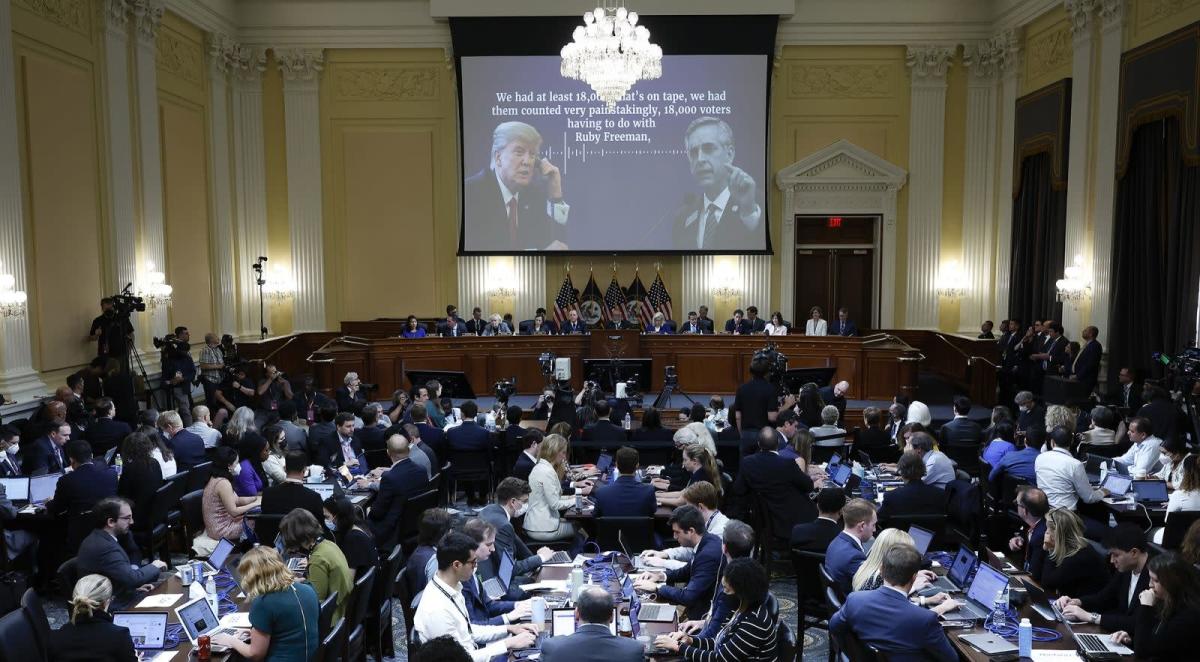 (Bloomberg) — The Jan. 6 committee resumed its public hearings Thursday with a focus on Donald Trump’s attempts to pressure top Justice Department officials to provide support for his claims of election fraud in battleground states that Joe Biden won.

Most Read from Bloomberg

The hearing featured first-hand accounts of a tense behind-the-scenes drama that culminated in an hours-long Sunday evening showdown in the Oval Office three days before the attack on the Capitol. Witnesses testifying live include Jeff Rosen, then the acting attorney general, and Richard Donoghue, then the acting deputy attorney general. Steven Engel, who headed the department’s Office of Legal Counsel, also is testifying.

Donoghue said his reaction to a YouTube video outlining the conspiracy theory was that it was “pure insanity.” Rosen testified that he too rebuffed multiple entreaties from White House allies to probe the theory.

Sidney Powell, who was one of Trump’s main lawyers backing his election fraud claims, told the panel Trump wanted her appointed as a special counsel to conduct an investigation into the allegations.

Trump “was extremely frustrated” by the lack of allegiance he was getting from the leadership of the Justice Department, Powell said in recorded testimony.

Engel, who was serving as head of the department’s office of legal counsel at the time, told the committee there was no justification to have a special counsel.

The extent of Perry’s personal involvement in urging the White House to “get going” on efforts to install Trump ally Jeffrey Clark or someone at the helm of DOJ who would pursue election-fraud claims was reflected in a series of text messages shown during the hearing.

Those texts, dated Dec. 26, 2020, show Perry also telling Meadows that he had just sent him an encrypted message and an “updated file” via Signal. The substance of that encrypted message was not immediately presented by the committee.

“Mark, just checking in as time continues to count down. 11 days to 1/6 and 25 days to inauguration. We gotta get going!” Perry initially texts Meadows. Later, Perry specifically texted, “Did you call Jeff Clark?”

Donoghue recalled a direct quote from Trump in December 2020 saying, “What I’m just asking you to do is say it was corrupt and just leave the rest up to me and the Republican congressmen.”

But no fraud “came close” to changing the outcome of the election in any state, Donoghue added.

“The president wanted the top Justice Department officials to declare the election was corrupt even though, as he knew, there was absolutely no evidence to support that declaration,” Illinois Republican Adam Kinzinger, a panel member, responded.

Rosen testified that Trump pressured him on a nearly daily basis between Dec. 23, 2020, and Jan. 3, 2021, to do more to investigate claims of election fraud.

“Yes, he asserted that the Justice Department had not done enough,” Rosen said of the former president.

Among Trump’s requests were filing a lawsuit in the Supreme Court, appointing a special prosecutor for election fraud, and sending a letter to various state officials.

“I will say that the Justice Department declined all of those requests because we did not think they were appropriate based on the facts and the law,” Rosen said.

Former Attorney General William Barr said there may never have been a presidential transition from Trump to Biden had he not ordered the Justice Department to investigate allegations of election fraud and announce they were unsubstantiated.

“I think the fact that I put myself in the position that I could say that we had looked at this and didn’t think there was fraud was really important to moving things forward,” Barr said in a recorded interview with the committee. “And I sort of shudder to think what the situation would have been if the position of the Department was: ‘We’re not even looking at this until after Biden’s in office.’”

The testimony represented the latest revelation from Barr, whose deposition has featured prominently in the committee’s findings being presented during the hearings.

Liz Cheney, the panel’s vice chair, promised to reveal at the end of Thursday’s hearing the names of members of Congress who sought presidential pardons after Jan. 6 for their involvement in efforts to overturn the election.

“We will see video testimony by three members of Donald Trump’s White House staff,” Cheney said. “They will identify certain of the members of Congress who contacted the White House after January 6th to seek Presidential Pardons for their conduct.”

More details are expected during Thursday’s hearing about the role the committee says Perry played in the efforts to install Trump ally Clark as acting attorney general — including with the use of encrypted messages.

Chairman Bennie Thompson wrote in December the panel had “evidence from multiple witnesses” of the Pennsylvania Republican’s direct involvement in the push for Clark.

Among the intriguing teases in that December letter was that Perry engaged in some of those efforts by “using the encrypted Signal app” with Mark Meadows, who was Trump’s last chief of staff.

Perry has refused requests to sit privately for committee questioning, both voluntarily and under subpoena.

As the committee’s start time was approaching, news broke that federal investigators have searched the home of Clark, who played a key role in trying to help Trump overturn the 2020 election results, according to a person familiar with the matter.

Clark, who served as an assistant attorney general, has come up frequently during the House probe. Other former Justice Department officials have testified that they threatened to resign over Trump’s plan to name Clark acting attorney general and send a letter to the states saying election results were in doubt.

Most Read from Bloomberg Businessweek