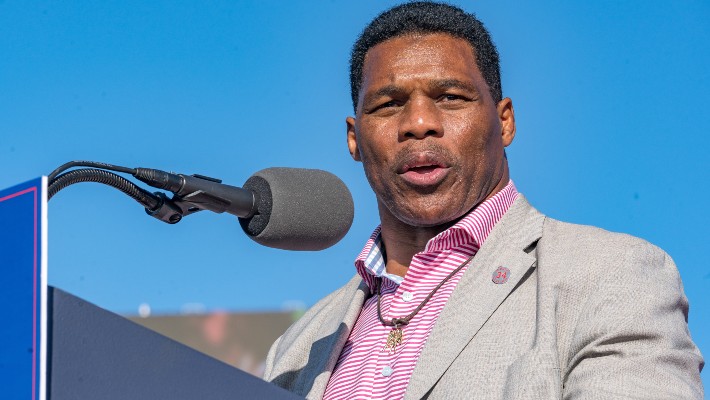 Arguably the strangest candidate in American politics right now is Herschel Walker. The former footballer is running for Georgia’s Senate seat, but he, well, you know, keeps saying stuff. Some of the stuff is untrue, like how he said he was valedictorian at both high school and college…then said he never said he graduated from college. Some of the stuff is, to put it lightly, not terribly smart. Some of the stuff makes not a lick of sense. Then there’s the fact that reporters keep discovering he has multiple kids he’s never discussed publicly and never sees.

None of this has damaged his credibility with Republican voters, not even the business about his secret kids. This probably won’t either: On a recent rightwing podcast, Walker a) wasn’t sure how many states there were in the United States of America, and b) guessed it was something like 52. Why not!

Walker was on The Clay Travis and Buck Sexton Show, where he was railing against Stacey Abrams comments about Georgia being “the worst state in the country to live.” It made Walker mad that someone running for elected office would want to improve what she saw as deplorable living conditions for citizens. And he went off.

Herschel Walker addresses Stacey Abrams comment that GA is the worst state for health care: “If it’s the worst state, why are you here? Why don’t you leave, go to another. There’s what? 51 more other states you can go to.” pic.twitter.com/vkDqMrTXCE

“If you don’t believe in the country, leave and go somewhere else,” Walker said. “If it’s the worst state, why are you here? Why don’t you leave ― go to another? There’s, what, 51 more other states that you can go to?”

I mean, who can blame him? America is always adding states! Initially there were 13 colonies — they didn’t even call them states then. Now there are 50. That’s like almost 40 more! Granted, the most recent state, Hawaii, didn’t become part of the nation until 1959. Maybe Walker — who, just to stress, will play a key part in the federal lawmaking process should he beat incumbent Democratic opponent Raphael Warnock — just figured Puerto Rico and Washington D.C. had been promoted to state from unincorporated territory and federal district, respectively.

When asked about the rather sizeable gaffe, a Walker spokesperson told HuffPost, “Herschel misspoke ― he obviously knows there are 50 states.” But rarely has the word “obviously” seemed less obvious.