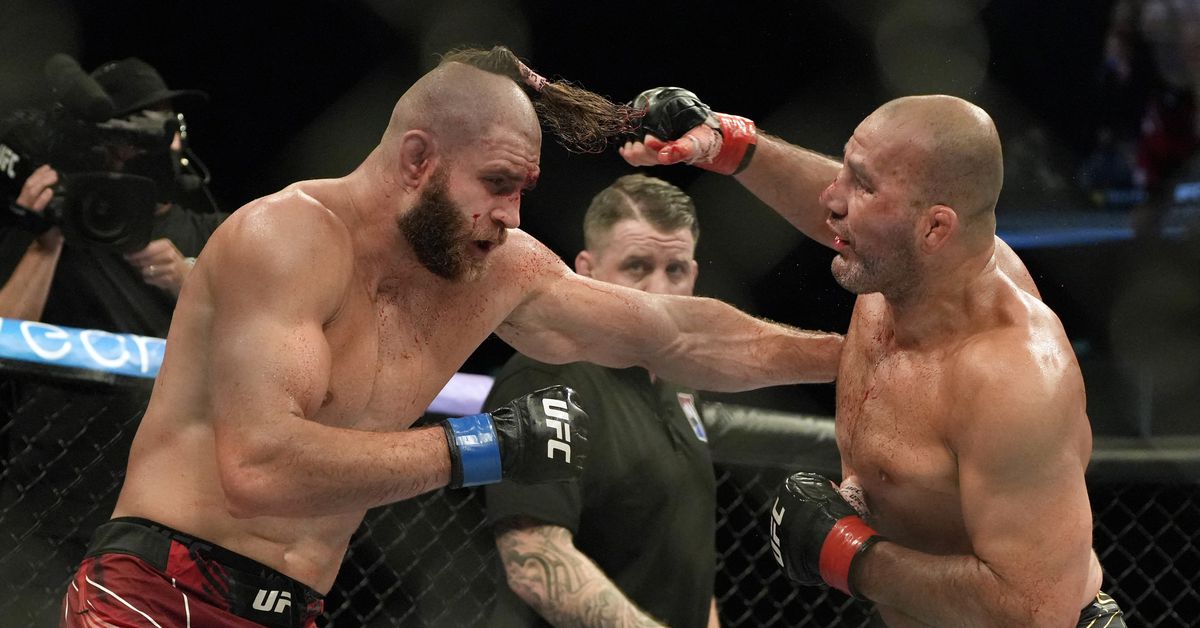 Glover Teixeira wants to run it back with Jiri Prochazka for the UFC light heavyweight championship.

The Brazilian was ahead on the scorecards with seconds left in the clock in the final round in Singapore when Prochazka sank in a rear-naked choke and forced him to tap at UFC 275 on June 11, becoming the first Czech fighter to claim a UFC belt.

“Physically well” and injury-free despite the 24-minute “Fight of the Year” candidate, Teixeira aims to start training again in less than three weeks with eyes on a potential rematch with Prochazka later this year, even if it means facing him in enemy territory in the Czech Republic.

“Why not?” Teixeira said on a recent episode of MMA Fighting podcast Trocação Franca. “I was going to fight him in Brazil, [so] we can go after the belt wherever it is. I went to defend it in Singapore. I could have said, ‘No, the first time was going to be in Brazil.’ Sadly, it didn’t work out. [But] we’ll go after this belt wherever, whatever it takes.”

Teixeira praised Prochazka’s heart after UFC 275 as the challenger was able to overcome difficult situations throughout four rounds and still become the first man to ever submit the experienced Brazilian in MMA.

“He’s a warrior, a guy that comes forward,” Teixeira said. “I knew he had the heart of a samurai, of a winner, who fought until the end and never gave up. He didn’t give up on the battle and managed to win. In terms of performance, I’m also upset with what happened. I had the perfect performance, was winning the fight and winning well, and I’m sad with the mistake I made. That’s why we have to do it again. It’s time to run it back. He has to realize that’s the fight everybody wants to see right now. Those who missed the first one will watch it now.

“It’s time for him to make money. He’ll make pay-per-view [money], he’s the champion. Not to mention that we did the talking inside the octagon. I don’t need to talk a bunch of crap to try to promote this fight, to try to earn the rematch. I really want this rematch [to happen], but I don’t want to have to talk [crap] for it. Many people get lost trying to do it.

“Dana White has to look at this. Fans are asking for this rematch. I had a good performance the entire fight, only lost one round, and was dominating the fifth round. [Prochazka] is not happy with his performance? Do it again. Let’s do it again, man. Let’s see who’s the best, because I know that’s still stuck in his throat, too, the way the victory was and people saying, ‘If it wasn’t for that [guillotine].’ It’s hard to hear that. ‘F***, he was losing that fight. How lucky he was.’ That wasn’t luck. He went for it and believed in the choke. I didn’t believe in it. I made a mistake.

“It’s time to do it again. That’s why I want a rematch. Promote it by saying we’ll come prepared to put on another show.”

Prior to his first title defense, Teixeira was flirting with the idea of hanging up the gloves later this year at a potential UFC event in New York. Now that he’s no longer the 205-pound champion, but still coming off of the performance of a lifetime, Teixeira sees no reason to slow down.

“I said that [retiring] was a possibility, but no, man,” Teixeira said. “The goal is to get the belt again, and we have to defend it after we win it. It’s a matter of honor for the athlete. You can retire after defending it, like I said, but I have a different goal now. I didn’t believe I was going to lose it. I planned on winning, defending it again, and maybe [retiring after]. I never said it was definitive. I’m hungry to come back and train again. As long as I’m doing it well, I’ll continue [fighting].”