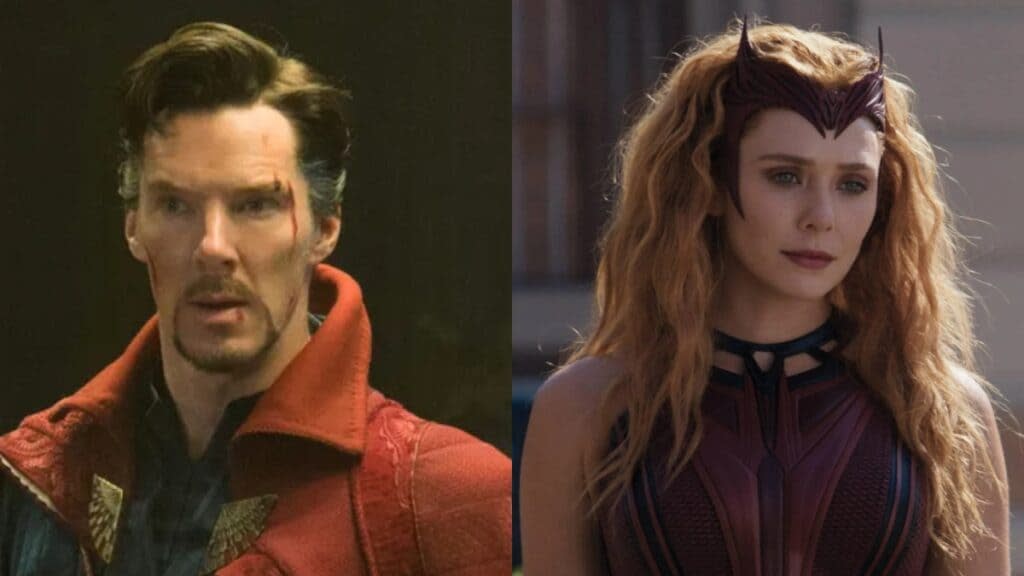 WARNING: Major spoilers ahead for “Doctor Strange in the Multiverse of Madness”

Ok, rage is a little much. But we certainly aren’t PLEASED with it

A quick, spoiler-filled recap: In the final minutes of “Doctor Strange in the Multiverse of Madness,” Wanda (having been fully corrupted by the Darkhold) realizes just how much terror and destruction she’s wrought — in multiple universes — in her efforts to acquire the real, living versions of her imaginary children, tries to do the right thing and destroy the Darkhold. In this case, it means completely destroying the temple of the Scarlet Witch, so she collapses the mountain — on top of herself. When Strange is asked later what happened to her, he shakes his head, indicating that Wanda didn’t make it out.

Now, we’ll get into the narrative of it all in a minute. But before all that, let’s be clear: this really logistically makes no sense.

Also Read:
‘Doctor Strange 2’ Writer Explains Wanda’s Controversial Arc: ‘It Was There for the Taking’

While Wanda was dreamwalking on Earth-838 and simultaneously holding Wong hostage at Kamar-Taj, Sara (Sheila Atim) snuck in and snatched the Darkhold from Wanda’s grasp. Sacrificing herself in the process, Sara stabbed the book, disintegrating it and its contents. As a result, Wanda is forced to go to the temple itself, where the contents of the Darkhold are carved into the walls.

But, just a few minutes earlier we literally watched Wanda lay waste to Kamar-Taj from above with the ease of a drone pilot destroying a civilian wedding. Given that kind of power, the destruction of the mountain fortress from a distance seems extremely within her skill set. Why would she have to essentially commit suicide to do it — particularly since we already saw how easy it was to destroy the supposedly all-powerful book version?

On the off chance it would require so much additional magic to fully destroy the carvings that it would kill a solo magic user, Wanda still had Wong at the ready. Surely he’d have jumped at the chance to use his powers to help her destroy such a toxic place. And yet, in the end, it was Wanda alone in a pile of rubble, and we’re left to believe her apparent death was a final act of redemption.

But now let’s talk about that redemption, shall we? Because narratively, it shouldn’t have been necessary. We already watched this entire arc once; “Multiverse of Madness” basically just lifted it from “WandaVision.”

The Disney+ series followed her through Westview, a reality she created (albeit unintentionally) using her magic as a coping mechanism to deal with Vision’s death. In the process, she took over the minds of an entire town, holding them hostage just clinging to her happy ending. But in the end, she realized that what she was doing was wrong, actively chose not to be a villain — again — and destroyed what she had built to release everyone.

Sounds a little familiar, right? In “Doctor Strange in the Multiverse of Madness,” Wanda went searching for the realities in which she still had her sons. This time, she did what she did knowingly and consciously — though let’s not forget, Wong and every version of Strange made a point to say that the Darkhold corrupts its users, and Wanda was no exception.

But for what it’s worth, that possession happened off screen. When we left Wanda in “WandaVision,” she was studying the Darkhold to learn more about the immense power she was mostly unaware of until Agatha came along. She’d inflicted some rather horrific punishment on Agatha, but also freed the people of Westview and basically apologized before fleeing. A morally gray place to be sure, but not a clear descent into villainy.

To have that shift happen off-screen was jarring, and only somewhat comprehensible for viewers who went in having seen “WandaVision” already. But even then, it’s still a journey that is nuanced, and should’ve happened on screen.

Anyway, in the end, Wanda realized what she was doing was wrong and repented. The only real difference between Wanda’s arc in “Doctor Strange in the Multiverse of Madness” and “WandaVision” was that, this time, she may have died. The story itself was merely a rehash.

Even Olsen noticed it as she was still working on “WandaVision” when “Multiverse of Madness” was in its early days. “There were just beats that I felt like were almost too similar, as opposed to reflective,” Olsen also told Variety.

“Similar” is a pretty easy way of putting it, since “Multiverse of Madness” basically left her in the exact same spot as the finale of “WandaVision” did, just in even deeper pain.

One might make the argument that Wanda’s ending was suicide — perhaps brought on by the knowledge that she (Wanda of Earth-616) wouldn’t ever be reunited with her kids, and thus wouldn’t be happy. And sure, that’s a possibility.

Agatha Harkness laid out exactly how much loss Wanda has experienced in her life in “WandaVision”; she lost her parents, then lost her brother, then lost Vision, and then lost her kids.

After the first loss, she at least had Pietro. But it’s impossible to forget the agony she went through in losing Pietro in “Avengers: Age of Ultron.” And yet, no one looked out for her except for Vision. That much became clear through the flashbacks shown in “WandaVision.” Only Vision really sat and talked with her, ever.

Even in Wanda’s very first scenes in “Multiverse of Madness,” it’s implied that Strange is apparently the first person to come talk to her after the Westview incident, and even he just brushes it off in the moment, because he’s focused on his immediate problems.

So, if “Multiverse of Madness” really is the end of Wanda, we’re looking at a story in which she simply lost everything, was shown sympathy but no empathy, virtually ignored through her pain, and then made to turn evil, apparently on a dime (and violently evil at that).

There’s no dimension there, and certainly no justice for a character who’s been part of this fold for seven years now. If Wanda is dead, her character was reduced almost fully to a trope — and that’s just demoralizing.

If I’m being honest, Marvel has struggled to give us a reason to care about the MCU since Endgame hit closing credits. The Disney+ shows may feature some familiar faces, but the stories fail to connect beyond the odd cameos here and there (looking at you Valentina Allegra DeFontaine). Killing off one of the last remaining links between the disparate elements of this increasingly unwieldy franchise — one that fans have been given a whole lot of time to connect with — feels like needlessly being painted into a corner. It’s a real let down.

Now, for the most part, no one seems to think she’s really dead. A good rule of thumb in the MCU has been “if you don’t see a body, they aren’t fully gone” — the obvious exception being Loki, who appeared to die onscreen in “Thor: The Dark World” only to show up at the end in disguise as Odin. The prevailing theory seems to be that the destruction of the Darkhold was merely a way of killing the Scarlet Witch, not Wanda.

Also Read:
How to Watch the Marvel Movies in Chronological Order

Even Elizabeth Olsen herself isn’t totally convinced this is the end of her Marvel journey.

“It’s weird that I’m expecting to return but no one’s told me I’m doing anything! But in my mind, I’m just making the assumption that they’ll have me again,” Olsen said in a recent interview with Variety. “I don’t know to what capacity, but I hope I’m back. I hope there’s also more fun to be had in something different. Where do we go?”

So, for the time being, we’ll remain hopeful that the Scarlet Witch’s end truly was the end of just the Scarlet Witch. But if it actually was the death of Wanda herself? It would be a wildly disappointing farewell to the character, to put it gently.