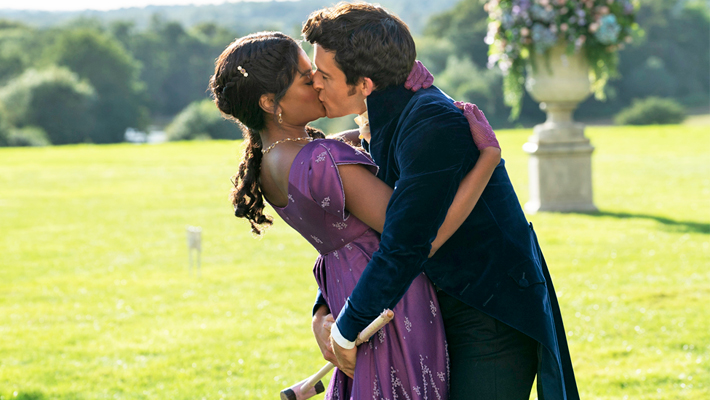 Bridgerton might be more famous for its sex scenes than it rightfully deserves to be, especially when it comes to the Duke-less version maintaining momentum in equally effective ways. We’ve already heard from star Jonathan Bailey when he explained that the intimate-type props included a deflated netball. Now, his leading lady, Simone Ashley, has explained more about how the cast prepped for the mood. It’ll remind you a lot of how Ben Affleck’s cucked Deep Water character apparently observed sensual snails to live (and get his rocks off) vicariously.

So now, I’m crossing my fingers for a crossover. Put Affleck in Bridgerton! With a Dunkin’ Cup and everything. This seems like it might work, given that Simone Ashley told The Los Angeles Times‘ The Envelope Podcast (via IndieWire) that observing snail mating was in integral part of her lead-up to Kate-and-Anthony scenes:

“We explored the movement of different animals to kind of portray different paces or different sexualities or how sensual something could be. For example, we look to how snails mate, and when snails mate, they actually produce a plasma that intertwines.”

So if it was a really sensual, slow kind of scene, we’d be like, ‘Oh, it’s like the snail.’ And it’s super like the plasma, like falling like honey. So we would make it about that or how dogs mate or chimpanzees mate — it’s very like fast-paced and a different kind of style.”

Somehow, this makes plenty of sense. And I’m willing to make plenty of logical leaps to get that Deep Water crossover, too. Hell, I already began to lobby for Season 3 to add Jason Momoa because he should (as our own Brian Grubb pointed out) be in everything. And then put the snails onscreen, too. DC stars Affleck and Momoa meet again, with their favorite beverages, Dunkin’ and Guinness. Don’t crush my dreams.