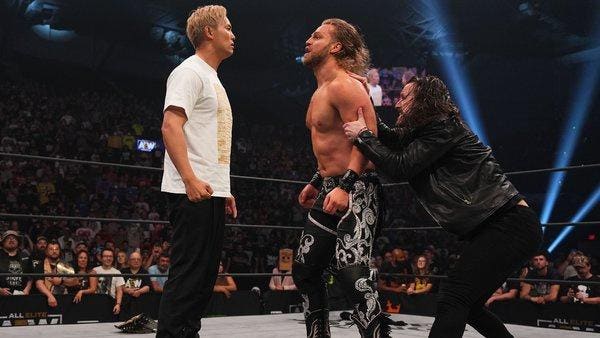 AEW Dynamite was up 15% from last week as Dynamite also drew a 0.31 rating in the 18-49 demographic, which is up from 0.28. Though the number is certainly a sigh of relief for AEW, Wednesday’s AEW Dynamite rating is AEW’s lowest viewership for a go-home show in its normal timeslot since AEW Full Gear 2020, which drew 717,000 while head-to-head against NXT.

AEW’s viewership struggled mightily last week. AEW Dynamite garnered its lowest number in its regular timeslot in over a year, while Rampage drew its second-lowest number ever. AEW programming joins a long list of television shows with sharp ratings declines this summer as TV ratings remain down as a whole. It’s worth mentioning, however, that WWE did some of its strongest numbers in a while for Friday’s WWE SmackDown, Monday’s WWE Raw and Tuesday’s WWE NXT, which saw its highest 18-49 viewership of the year.

While WWE seems to be benefiting from residual interest in the bombshell Vince McMahon investigation, McMahon’s brief, empty and at-times unadvertised appearances are hardly carrying these shows. Friday’s SmackDown was main evented by top star Roman Reigns and emerging draw Riddle, who competed for the Undisputed WWE Universal Championship in a match that peaked at an impressive 2.8 million viewers.

WWE has benefited from showcasing top stars in meaningful matches while AEW Dynamite’s viewership has cratered in the midst of promoting a niche pay-per-view with little-to-no storylines behind the majority of male hardcore wrestling dream matches.

AEW added four additional matches to Forbidden Door on another busy show that ended with a lengthy brawl while Jon Moxley and Hiroshi Tanahashi tensely stared each other down. In addition to Forbidden Door being marketed to a smaller sub-niche, its buyrate could also be hurt by a rising number of key injuries.

AEW Dynamite opened with top star Bryan Danielson announcing he will not be competing at the Forbidden Door or next week’s Blood and Guts show on June 29. Danielson will name a mystery opponent in his place to take on NJPW submission specialist Zack Sabre Jr., who made a brief appearance. Danielson joins AEW world heavyweight champion CM Punk on the shelf. Fellow needle-movers Kenny Omega—who has been out since November—and MJF (who is off TV to sell a worked-shoot), as top stars who are not advertised to compete.

A male hardcore wrestling pay-per-view also means a limited presence for women. Of the 34 wrestlers scheduled to be on this show, 32 are male and neither of the women are Britt Baker and Jade Cargill, who are two of AEW’s top television draws regardless of gender. AEW x NJPW Forbidden Door was able to quickly sell out due to an impassioned and loyal fanbase. But interest in the Forbidden Door seems to have waned as AEW attempts to book $60 pay-per-views in back-to-back months for the first time in history.