LOVE Island fans think Davide is deliberately trying to ruin things for Ekin-Su after their huge bust up.

The Italian stallion has appeared to be taking pleasure in winding up the actress and tonight told her that Jay had kissed newbie Antigoni.

Jay was one of the three lads the new bombshell picked to get to know – leaving Ekin-Su fuming.

When he returned to the villa alongside Davide and Dami, Davide told Ekin-Su: “You should have seen their passionate kiss.”

Devastated Ekin-Su rushed to ask Antigoni if they really snogged and was relieved to hear it was just a wind up. 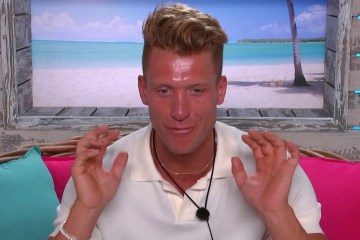 A second tweeted: “Davide is not even here for love anymore, just here to ruin Ekins’ experience 😂 #loveisland.”

And a third added: Davide hasn’t had a good day unless he has attempted to ruin Ekin su’s day #LoveIsland.”

Last week Davide and Ekin-Su’s romance came to an abrupt end after he learnt she had kissed Jay behind his back.

It escalated into an explosive bust-up – with Italian stallion Davide claiming Turkish actress Ekin-Su lost interest after he refused to have sex with her.

She stormed over to Davide, who is with the lads, as he ranted: “They are going to give you an Oscar”

Ekin-Su said: “Go on, do you want to show off even more in front of the boys, Mr perfect body? Go on.”

Davide quipped: “I am just in shock.”

Ekin-Su continued: “Did I hurt your ego?”

Davide raged: “I’m telling you, you are a liar.”

Davide then dropped a huge bomb, telling her: “What do you expect? In the outside world you want to s*** on the first night.

Ever since then, viewers have noticed that Davide has made as many digs as possible at Ekin-Su both in front of her and behind her back.

Read all the latest Love Island news, gossip and exclusives