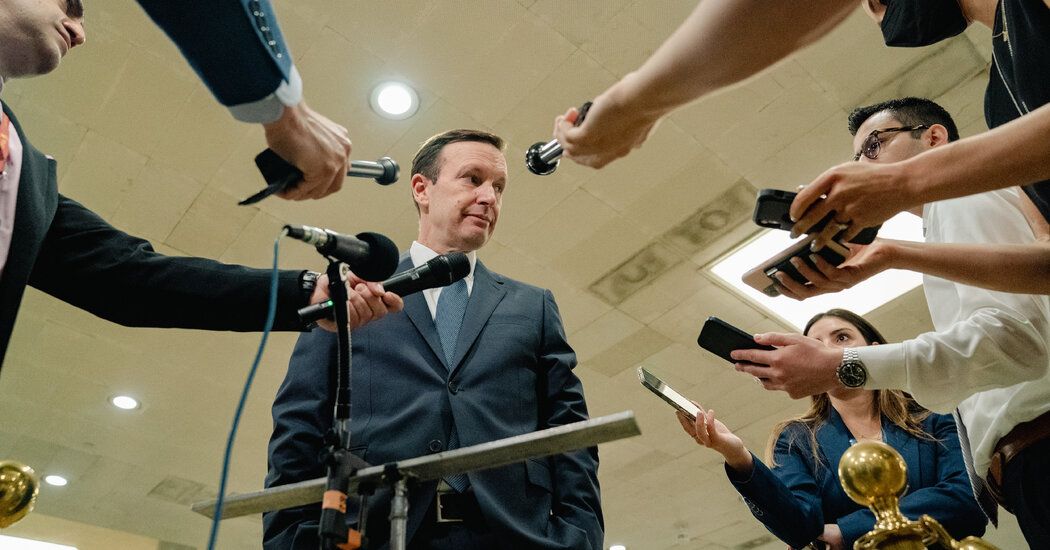 (Want to get this newsletter in your inbox? Here’s the sign-up.)

Good evening. Here’s the latest at the end of Wednesday.

The legislation, which could become the most significant overhaul of the nation’s gun laws in decades, cleared a vote in the Senate, 64 to 34, on Tuesday, only hours after the text of the bill had been released.

The measure would enhance background checks and fund, in addition to other intervention programs, the implementation of state red-flag laws, which allow authorities to temporarily confiscate guns from people deemed dangerous. Significantly, the bill would also ensure that partners who are dating each other seriously are included in a federal law that bars domestic abusers from purchasing guns, a longtime priority that has eluded advocates. Proponents hope to pass it by Saturday.

The fall of Sievierodonetsk and Lysychansk would all but complete Russia’s conquest of the province, a major part of the Donbas region that became President Vladimir Putin’s focus after Russia failed to seize Ukraine’s two biggest cities. Ukrainian forces are digging in on high ground in Lysychansk for a pivotal battle.

But Russia’s gains in eastern Ukraine have come at a tremendous cost, as Ukrainian commanders have often chosen to stand and fight, buying time for more heavy arms to arrive from Ukraine’s allies. In the south, Ukraine’s offshore strikes suggest that its forces are beginning to use more powerful Western anti-ship weapons.

3. At least 1,000 are dead from an earthquake that struck Afghanistan.

The death toll is expected to rise, as the 5.9-magnitude quake struck a poor, remote and mountainous region where some residents live in homes of clay and straw. Officials say at least another 1,600 people were injured in the quake. Follow live updates.

The quake is the country’s deadliest in more than two decades. The Taliban vowed to serve the nation after seizing power last summer, but the earthquake is only the latest obstacle — among severe drought, hunger, attacks by militants and an economic crisis — to challenge the new government.

In a speech, he asked Congress to lift federal taxes — about 18 cents per gallon of gasoline and 24 cents per gallon of diesel — through September, just before the midterm elections. The president also asked states to suspend their own gas taxes, and his administration has estimated that a combination of several possible steps will lower gas prices by at least $1 a gallon.

But it will be difficult for the White House to get approval for the holiday, which Republicans widely oppose, accusing the administration of undermining the energy industry. Critics, including some Democrats, have questioned its effectiveness as well as the savings it will offer consumers.

In Washington, Jerome Powell, the chair of the Federal Reserve, testified before a Senate committee that the Fed was “not trying to provoke” a recession, but that such an economic decline was “certainly a possibility.” Read why the Fed is taking the risk.

5. Three recent detainees at Rikers Island died in less than a week.

The year’s total is now nine deaths, three more than at this time last year. In 2021, 16 people died after being held in New York City’s jails, the highest toll since 2013.

The deaths came just a week after a judge granted the city at least another six months to come up with a plan for fixing its troubled jail system or face a federal takeover. Mayor Eric Adams celebrated the order in a statement last week, but members of a jail oversight agency said the growing toll should compel the judge to reconsider and take action.

Elsewhere in New York, the M.T.A. said it would add elevators and ramps to 95 percent of subway stations by 2055 as part of a settlement agreement in lawsuits over accessibility issues. Vaccination for children under 5 began today in the city, including in Times Square.

6. A Congressional panel found that the owner of the Washington Commanders interfered with an N.F.L. investigation into sexual harassment.

The N.F.L. was aware of Snyder’s actions, a memo said, “but failed to take meaningful steps to prevent them.” At a hearing today, Roger Goodell, the league’s commissioner, stood by the N.F.L.’s investigation. The league started a second investigation into the Commanders earlier this year, in response to a new allegation of sexual harassment that directly implicates Snyder.

After months of online speculation about bare shelves, Time magazine declared a “great tampon shortage” earlier in June. The chief financial officer of Procter & Gamble, which manufactures Tampax, has said that it had been “costly and highly volatile” to acquire the raw materials necessary for production, like cotton and plastic.

While a representative for the company said the shortage was a “temporary situation,” some women are wondering whether they may have to try a new approach. Alternatives like reusable menstrual products, period underwear and menstrual cups — which have been slowly growing in popularity — may receive more attention.

When she won her 11th career medal at the Tokyo Games in 2021, she became the most decorated American track and field athlete in Olympic history. Though she is running in her final competitive season this summer, her ambition has only grown broader.

Up next? Full-time advocacy, from the woman who proved that her words could lead to widespread protections for pregnant athletes. “I think that’s what it boils down to,” Felix, who gave birth to her daughter in an emergency cesarean section, said. “Trying to speak for those whose voice isn’t as loud.”

In other sports news, parents are finding themselves as the real enforcers of gender equity in high school and middle school athletics. And dozens of organizations called on President Biden to negotiate for the release of Brittney Griner, the W.N.B.A. star who has been detained in Russia since February.

For more adventurous eating, visit Moody at the Real Mother Shuckers in Bushwick, Brooklyn. He owns and operates an oyster cart to provide a more approachable oyster experience than the city’s luxurious raw bars, and to carry on New York’s legacy of Black oystermen.

10. And finally, the houseplants you’ll be hooked on.

Tony Avent, the founder of Plant Delights Nursery in North Carolina, says new gardeners want “more than their grandmother’s flower garden.” He recommends starting with aroids because “they’re so odd, like something out of a horror film.”

The basic structure of their flower heads gives them their strange look: a spikelike spadix inside a spathe, which is a bract (a specialized leaf) that may be brightly colored and is sometimes hooded or pulpit-like.

Their flowers are tiny and tightly clustered like beads, and each is unisexual. It all adds up to not your average bloom.

Have an uncommon evening.