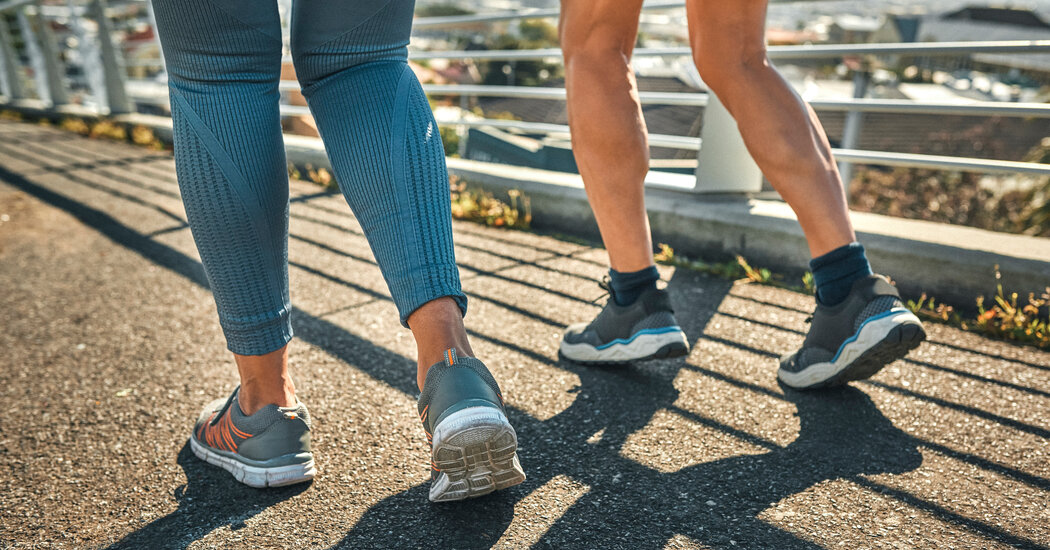 A promising new study suggests that walking could ward off knee pain for people with osteoarthritis.

Researchers surveyed over 1,000 people ages 50 or older with knee osteoarthritis, the most common type of arthritis in the United States. Some had persistent pain at the outset, while others did not. After four years, those who started off without frequent knee pain and walked for exercise at least 10 times were less likely to experience new, regular bouts of stiffness or aches around their knees and had less structural damage in their knees. The study suggested that people with knee osteoarthritis who are bowlegged might particularly benefit from walking.

The research offers the potential of an easy — and free — way to combat one of the most common culprits of knee pain among older adults.

The findings represent “a paradigm shift,” said Dr. Grace Hsiao-Wei Lo, an assistant professor at Baylor College of Medicine in Houston and the lead author on the study. “Everyone’s always looking for some kind of drug. This highlights the importance and likelihood that interventions for osteoarthritis might be something different, including good old exercise.” The research suggests that exercise could help manage osteoarthritis in other joints, she added, like those in the hips, hands and feet.

Osteoarthritis, sometimes referred to as “wear and tear” arthritis, affects over 32.5 million adults in the U.S. and occurs when the joint cartilage breaks down and the underlying bone begins to change, according to the Centers for Disease Control and Prevention. The risk of developing the condition increases as you age, and around a third of people over 60 have knee osteoarthritis, Dr. Lo said. Many patients take medications like ibuprofen or naproxen to treat the pain, she added, which in large doses can lead to kidney issues and ulcers.

Instead, they may be able to turn to exercise. For decades, health experts saw walking primarily as a way to boost cardiovascular health, said Dr. Elaine Husni, a rheumatologist at Cleveland Clinic who was not involved in the study. In recent years, though, doctors have looked to low-impact workouts to treat conditions like depression, cognitive impairment and mild osteoarthritis. But the new study shows that walking can also act as a preventive measure, Dr. Lo said, and suggests that people who are at higher risk of developing the condition may want to incorporate a regular walk into their routine. For instance, Dr. Lo herself said that, based on her findings, she should walk more, as her mother has osteoarthritis.

The study began in 2004 and documented participants’ baseline knee pain, using radiographs to assess their osteoarthritis. Researchers then asked participants to document their exercise habits and reviewed their symptoms at regular follow-up visits, asking how frequently their knees hurt.

After four years, 37 percent of the study participants who did not walk for exercise (not including the occasional trip to the train or grocery store) developed new, frequent knee pain, compared with 26 percent who did walk.

Of course, researchers cannot definitively say that walking staved off knee pain, and it did not appear to lessen existing pain. Self assessments can be less accurate than fitness trackers or step counters. And the researchers did not track the distance or frequency that people walked, nor did they recommend strategies for how and when people with osteoarthritis should incorporate walking into their exercise routines.

Still, the results bolster what clinicians already understand about how to manage osteoarthritis. Consistent movement can help create muscle mass, strengthening ligaments around the joints that have osteoarthritis, Dr. Husni said. Walking is a low-intensity, low-impact workout, allowing people to maintain the strength and flexibility that are critical for healthy joints, she added.

“It’s an intervention that anyone can do,” she said. “You have no excuse. You can do it anywhere you are.”

Those who are already in pain should be careful to not overdo exercise, though, said Dr. Justen Elbayar, a sports medicine specialist in the orthopedic surgery department at NYU Langone Health who was also not involved in the study. Walking long distances might exacerbate aches in some patients with severe arthritis, he said — but for those with smaller amounts of arthritis, “it’s one of the best exercises you can do.”

He recommends that people start with a small, short walk, gradually building up distance over time. The goal of the exercise is to provide muscular support to an arthritic knee, he said, and to let the joints, tendons and tissues become acclimated to the walking.

He also suggested using supportive shoes, drinking plenty of water during a walk and taking frequent rests if tired or new to it. After a long walk, icing the knee may also help relieve discomfort, he added.

While a stroll down the street can’t repair cartilage or remedy existing pain, the exercise offers a compelling and accessible option for staving off the more intrusive aspects of osteoarthritis, Dr. Lo said. After all, she added, “walking doesn’t cost a cent.”