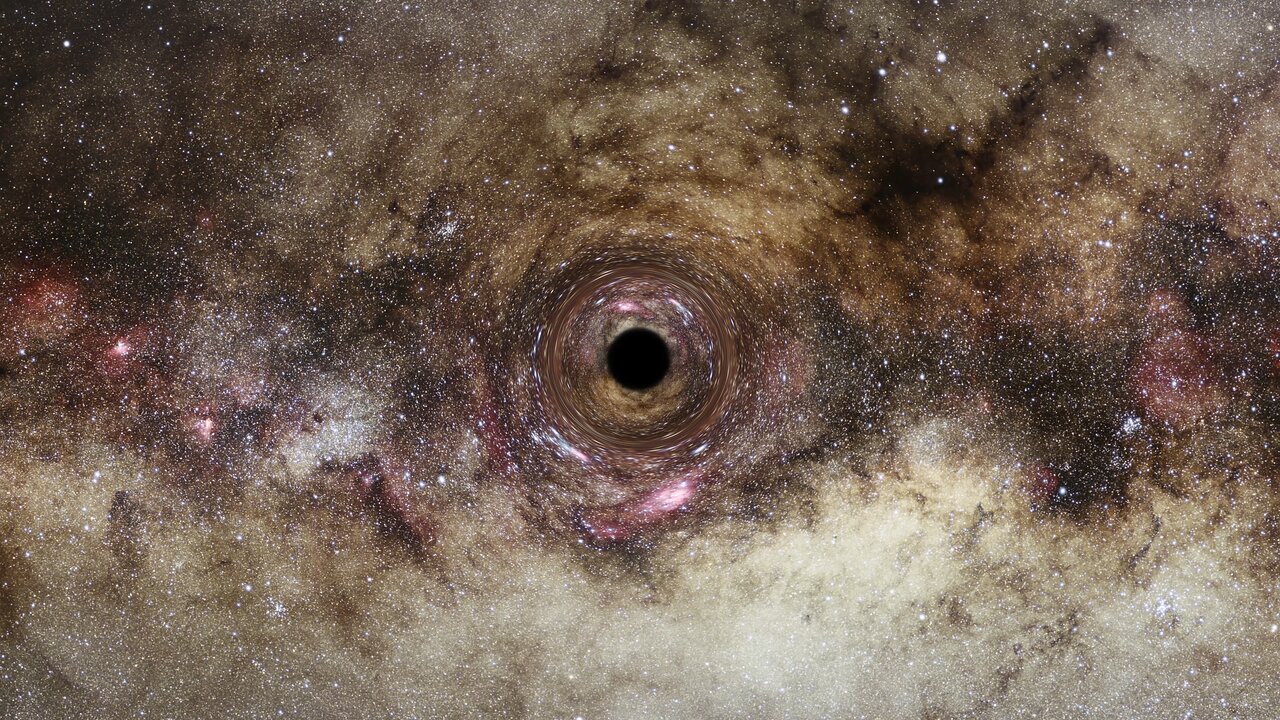 Astronomers estimate that 100 million black holes roam among the stars in our Milky Way galaxy, but they have never conclusively identified an isolated black hole. Following six years of meticulous observations, the NASA/ESA Hubble Space Telescope has, for the first time ever, provided direct evidence for a lone black hole drifting through interstellar space by a precise mass measurement of the phantom object. Until now, all black hole masses have been inferred statistically or through interactions in binary systems or in the cores of galaxies. Stellar-mass black holes are usually found with companion stars, making this one unusual.

Black holes roaming our galaxy are born from rare, monstrous stars (less than one-thousandth of the galaxy’s stellar population) that are at least 20 times more massive than our Sun. These stars explode as supernovae, and the remnant core is crushed by gravity into a black hole. Because the self-detonation is not perfectly symmetrical, the black hole may get a kick, and go careening through our galaxy like a blasted cannonball.

Telescopes can’t photograph a wayward black hole because it doesn’t emit any light. However, a black hole warps space, which then deflects and amplifies starlight from anything that momentarily lines up exactly behind it.

Ground-based telescopes, which monitor the brightness of millions of stars in the rich star fields toward the central bulge of our Milky Way, look for a tell-tale sudden brightening of one of them when a massive object passes between us and the star. Then Hubble follows up on the most interesting such events.

Two teams used Hubble data in their investigations — one led by Kailash Sahu of the Space Telescope Science Institute in Baltimore, Maryland; and the other by Casey Lam of the University of California, Berkeley. The teams’ results differ slightly, but both suggest the presence of a compact object.

The warping of space due to the gravity of a foreground object passing in front of a star located far behind it will momentarily bend and amplify the light of the background star as it passes in front of it. Astronomers use the phenomenon, called gravitational microlensing, to study stars and exoplanets in the approximately 30,000 events seen so far inside our galaxy.

The signature of a foreground black hole stands out as unique among other microlensing events. The very intense gravity of the black hole will stretch out the duration of the lensing event for over 200 days. Also, if the intervening object was instead a foreground star, it would cause a transient color change in the starlight as measured because the light from the foreground and background stars would momentarily be blended together. But no color change was seen in the black hole event.

Next, Hubble was used to measure the amount of deflection of the background star’s image by the black hole. Hubble is capable of the extraordinary precision needed for such measurements. The star’s image was offset from where it normally would be by about a milliarcsecond. That’s equivalent to measuring the height of an adult human lying on the surface of the moon from the Earth.

This astrometric microlensing technique provided information on the mass, distance, and velocity of the black hole. The amount of deflection by the black hole’s intense warping of space allowed Sahu’s team to estimate that it weighs seven solar masses.

“As much as we would like to say it is definitively a black hole, we must report all allowed solutions. This includes both lower mass black holes and possibly even a neutron star,” said Jessica Lu of the Berkeley team.

“Whatever it is, the object is the first dark stellar remnant discovered wandering through the galaxy, unacompanied by another star” Lam added.

This was a particularly difficult measurement for the team because there is another bright star that is extremely close in angular separation to the source star. “So it’s like trying to measure the tiny motion of a firefly next to a bright light bulb,” said Sahu. “We had to meticulously subtract the light of the nearby bright star to precisely measure the deflection of the faint source.”

Sahu’s team estimates the isolated black hole is traveling across the galaxy at 160,000 kilometres per hour (fast enough to travel from Earth to the Moon in less than three hours). That’s faster than most of the other neighbouring stars in that region of our galaxy.

“Astrometric microlensing is conceptually simple but observationally very tough,” said Sahu. “Microlensing is the only technique available for identifying isolated black holes.” When the black hole passed in front of a background star located 19,000 light-years away in the galactic bulge, the starlight coming toward Earth was amplified for a duration of 270 days as the black hole passed by. However, it took several years of Hubble observations to follow how the background star’s position appeared to be deflected by the bending of light by the foreground black hole.

The existence of stellar-mass black holes has been known since the early 1970s, but all of their mass measurements—until now—have been in binary star systems. Gas from the companion star falls into the black hole and is heated to such high temperatures that it emits X-rays. About two dozen black holes have had their masses measured in X-ray binaries through their gravitational effect on their companions. Mass estimates range from 5 to 20 solar masses. Black holes detected in other galaxies by gravitational waves from mergers between black holes and companion objects have been as high as 90 solar masses.

“Detections of isolated black holes will provide new insights into the population of these objects in the Milky Way,” said Sahu. He expects that his programme will uncover more free-roaming black holes inside our galaxy. But it is a needle-in-a-haystack search. The prediction is that only one in a few hundred microlensing events are caused by isolated black holes.

In his 1916 paper on general relativity, Albert Einstein predicted that his theory could be tested by observing the offset in the apparent position of a background star caused by the Sun’s gravity. This was tested by a collaboration led by astronomers Arthur Eddington and Frank Dyson during a solar eclipse on 29 May 1919. Eddington and his colleagues measured a background star being offset by 2 arc seconds, validating Einstein’s theories. These scientists could hardly have imagined that over a century later this same technique would be used — with a then-unimaginable thousandfold improvement in precision — to look for black holes across our galaxy.