TRAVIS Barker has posted a photo of his wedding bed shared with Kourtney Kardashian, causing an uproar among fans who dislike their PDA.

The newlyweds have been completely open about their wild sex life, leaving some fans shocked and bewildered.

Now Travis, 46, has added fuel to the flame by sharing a photo of his post-wedding bed shared with Kourtney, 43, from their private jet on his Instagram Stories.

The Blink-182 star took to the platform on Friday to post a snap of the white mattress outfitted with white sheets.

On top of the bed, red rose petals were scattered and a sign reading: “We do” was placed as decoration.

A vase containing a small bouquet of more red flowers was displayed on the nightstand, and the window shades of the private plane were tightly shut. 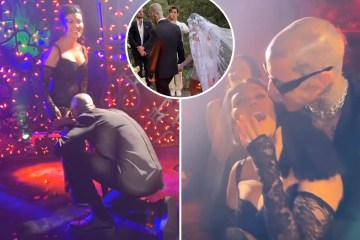 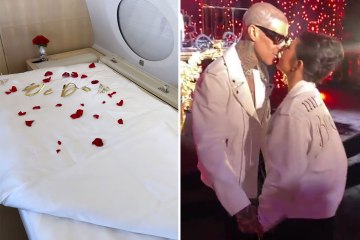 Despite the post-marital joy surrounding Travis and Kourtney’s recent nuptials, some fans have seen enough of their incessant PDA.

Several ran to Reddit to rip the couple for their constant NSFW content and wild behavior in front of their combined six children.

“I truly wonder how her children will internalize this level of PDA. Will one never want to be touched and one have teachers calling that the kid is straddling kids in the schoolyard,” one began, referring to previous photos shared of the Kourtney in her husband’s lap.

“How do you go from your entire identity being a mom to a complete disregard for their feelings,” they ripped.

“I could live without all of their PDA, especially in front of their kids,” a second admitted.

A third ranted: “Mid life crisis! The PDA between her and Travis, the whole shabang to get pregnant…just take them off the show completely!”

“Travis and Kourtney are mentally messing up their kids with how they act. It’s not just gross, but it’s also harmful to them,” another claimed.

A fourth added: “Yeah, I cannot imagine almost having sex with my clothes on with my partner around my mom. That’s just sick.”

“Kravis is disgusting. Literally not in how they act – most people enjoy sex and sexual activities – but the fact that they subject the kids to it is so f**king gross,” a fifth noted.

“For anyone whose suffered narcissistic abuse, the writing is EVERYWHERE. For Kourtney’s sake, I hope not.

“If he is love bombing, it’s going to feel shocking when he pulls the rug out front underneath her. It’s an unforgettable feeling,” a final predicted.

Travis shared romantic photos from inside of an elevator with his new wife.

The Poosh founder wore her wedding gown and veil and got sensual with her new husband.

The couple made out and Travis captioned his post: “Love in an elevator.”

But fans were more fired up over Kourtney dropping an NSFW post in the comments.

Putting her own twist on some Aerosmith lyrics, she cheekily commented: “Lovin’ it up when I’m goin’ down.”

A fifth fan wrote: “Close enough to the actual lyrics, I guess.”

Yet a sixth fan complained: “Bored with this constant PDA.”