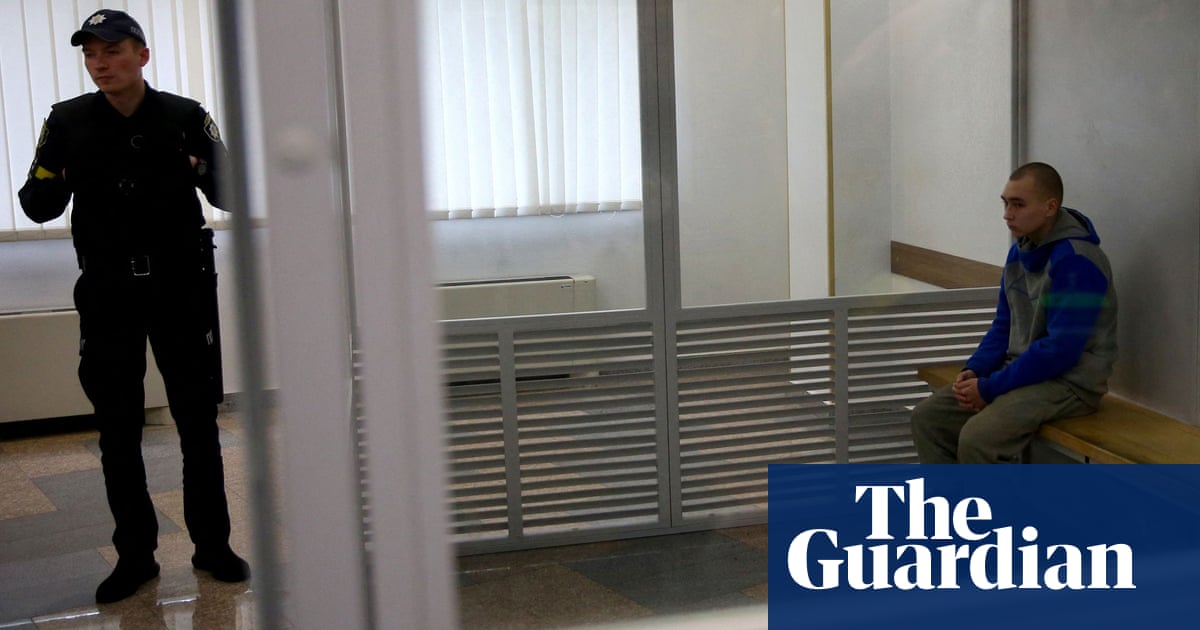 A court in Kyiv has sentenced a Russian soldier to life in prison for the killing of a Ukrainian civilian, in the first verdict in a trial related to war crimes carried out by the Russian army during its invasion of Ukraine.

Vadim Shishimarin, a 21-year-old sergeant, was found guilty of killing 62-year-old Oleksandr Shelipov in Sumy region during the first days of the invasion.

The verdict was delivered on Monday by the judge, Serhii Ahafonov, at a packed courtroom, with dozens of Ukrainian and foreign television cameras crammed into the small room.

The judge said although Shishimarin cooperated with the investigation and expressed remorse, the court could not accept his claim he had not meant to kill Shelipov when he fired at him.

Shishimarin, wearing a grey-and-blue hoodie, listened with his head bowed to the judge deliver his long verdict from inside the glass box for defendants. He was given a translation of the judge’s words from Ukrainian to Russian by a court-appointed translator.

It is the first in a number of war crimes cases that Ukraine prosecutors want to try as quickly as possible. Ukraine’s prosecutor general, Iryna Venediktova, has said she is preparing more than 40 cases related to war crimes that could come to trial soon, and Ukrainian authorities say they have registered more than 10,000 war crimes across the country.

Trying cases so quickly, while the conflict is still ongoing, is extremely unusual and may violate elements of the Geneva conventions, legal experts say. However, Ukraine has made swift justice a priority, partly as a warning to Russian troops still occupying parts of the country that they may face justice for any crimes they commit.

Prosecutors said Shishimarin was in a car with other Russian soldiers, one of whom ordered him to shoot Shelipov, as he had been a witness to them shooting at a car and then stealing it.

Shishimarin pleaded guilty to the crime, but his lawyer argued that his client was following an order and did not have intent to kill. He has 30 days in which to launch an appeal.

In an interview with the Russian independent news outlet Meduza, Shishimarin’s mother Lyubov claimed her son was a caring and kind young man who had joined the army partly because there was a lack of opportunity in their home town, and partly to help support the family after his stepfather was killed last year.

She said Shishimarin called him in late February and said: “Mummy, I won’t have a telephone for a week, I have to give it up. If someone tells you I went to Ukraine, don’t believe them.”

The next she heard of him was when she found out he was a prisoner in Ukraine, she said.

Shelipov’s widow, Katerina, identified Shishimarin as the man who shot her husband during a court hearing last week, and told the court she hoped he would receive a life sentence. “But if he is traded for our defenders of Azovstal, I would not mind,” she said.

There has been some speculation that once convicted, Shishmarin and others may be used as part of an exchange for Ukrainians held by Russia, including the more than 2,000 defenders of the Azovstal steel plant in Mariupol who recently surrendered to the Russians.

Russian officials have veered between calling for harsh punishments, including even the death penalty, for some of the fighters, and suggesting they may be open to an exchange.