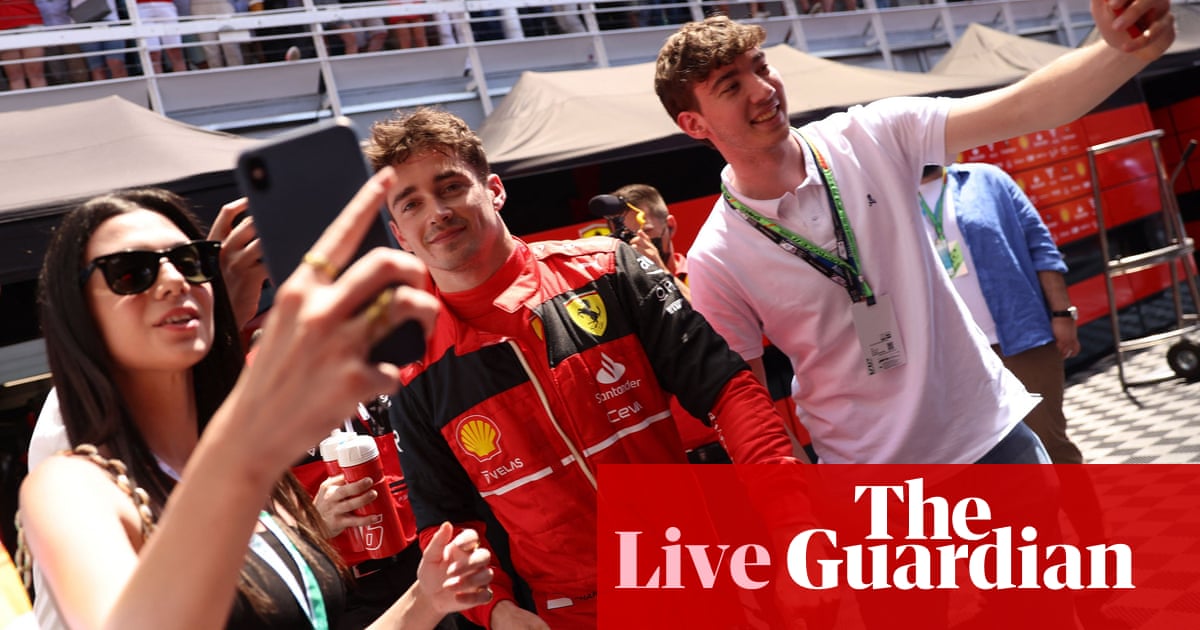 Newcastle United legend Patrick Kluivert is among the celebs watching on today. “I love Lewis, he stands for good things,” he says having been collared by Sky. He’s tipping City for the league, and Sergio Aguero is also among today’s spectators. Coincidence? Surely not.

Here’s Fernando Alonso, who has triumphed on this circuit – albeit nine years ago: “I have nothing to lose, and it can only get better starting last so we will be aggressive and see the outcome. Hopefully Carlos can give something extra starting from the front, and from my side, I’ll try and give a good show today.”

Sainz says tyre management will be key and he’s not wrong: the track is a blazing 48 degrees today and we’re expecting a two-stop race. Here’s what’s on offer:

What about the home drivers? Carlos Sainz starts in a great spot, third in the grid, and he has never failed to finish in the points here. “It’s a decent position,” he says. “I think the key will be the start, the tyre management.”

As for Fernando Alonso, he starts from the very back after an engine penalty and 17th-placed qualifying finish. It hardly augurs well, nor does the fact his five races this season have yielded two retirements and just one points finish: he may well be content with the latter here.

It’s a scorcher in Catalonia – well over 30 degrees – so all eyes will be on the drivers’ tyre strategy this afternoon. All the top three teams have equipped both their drivers with two new sets of mediums and one hard.

Meanwhile, here’s what Verstappen had to say about his loss of power in yesterday’s last qualifying lap: “It’s always difficult to tell but I couldn’t do my final run, either the DRS didn’t open or I just lost power. It’s a bit of a shame but I think overall, to be on the front row for us here, looking at the whole weekend so far, I think it was a good achievement.”

After the pomp and showbiz of Miami, it’s game-face time at the Circuit de Catalunya, where Max Verstappen is looking to hunt down Charles Leclerc in the standings and on the asphalt with a third successive GP win. The Dutchman, coolly triumphant in Miami and Emilia-Romagna, looks to have found his feet following a disastrous start to the season but his task today is a formidable one.

His Monégasque rival, 19 points ahead in the standings, blitzed round the circuit with an almighty lap yesterday to beat Verstappen to pole. The way he spun out on his first run – and the fact he has never done better than fourth at this circuit – will give his competitors cause for hope, though the fact Verstappen’s car lost power in the final lap will bring unwelcome flashbacks of the early-season breakdowns that left him playing catch-up.

Both the drivers’ and constructors’ championships are beginning to take the shape of a two-horse race, with Ferrari and Red Bull accelerating away from the chasing pack in the latter. Desperate to quash any league-of-their-own vibes are the Mercedes team, who have floundered thus far this season, finding no answer to the problem of porpoising caused by the new regulatory constraints.

Yesterday, though, offered hints that they may be readying themselves to show up to the party, George Russell and Lewis Hamilton putting in their best combined qualifying of the season. “We’ve definitely moved forward, which is great,” ventured Hamilton after qualifying two places behind his teammate in sixth.

The week’s other fun has come thanks to Aston Martin, whose upgraded car bears a design strikingly similar to Red Bull. The fact that two senior aerodynamicists left Red Bull for Aston Martin last year led Christian Horner to bemoan the suspicious emergence of “a very close-looking clone”, which has since been dubbed the “green Red Bull” and Horner’s pit-wall team spent Friday’s practice pointedly sipping on green cans of Red Bull in gloriously petty protest. Watch this space.