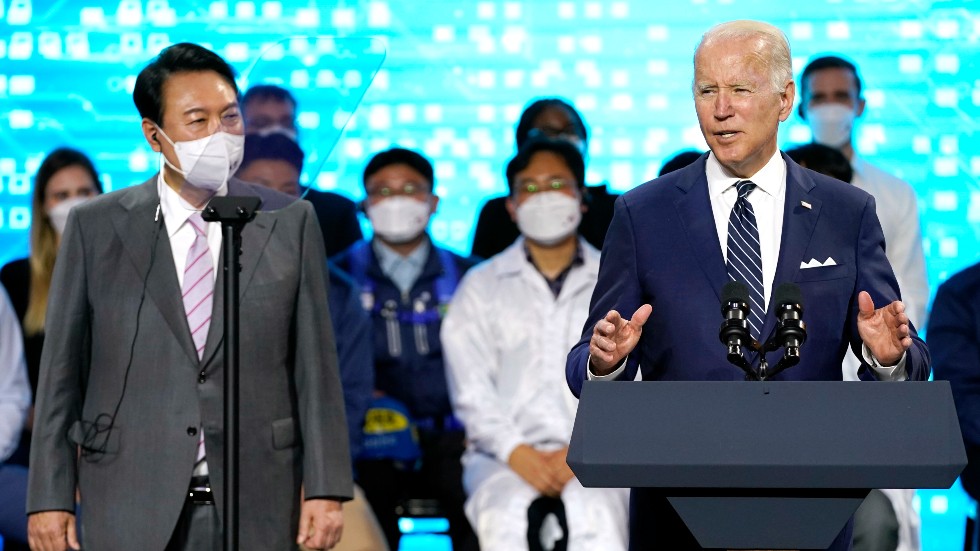 President Biden on Friday toured a Samsung factory in South Korea and vowed to strengthen ties between Washington and Seoul during his first stop on a trip to Asia.

“We’re standing at an inflection point in history where the decisions we make today will have a far-reaching impacts on the world we leave to our children tomorrow,” Biden said in remarks at the Samsung plant in Pyeongtaek. “This vibrant democracy has become a powerhouse of global innovation by investing in educating its people.”

“This is the moment, in my view, to invest in one another, to deepen our business ties, to bring our people living closer together,” Biden said.

He touted domestic investments of the infrastructure law last year and also expressed hope that semiconductor legislation being worked on in Congress would soon be passed into law.

The bill is the result of a bipartisan effort to make the U.S. more competitive against China in the tech space.

On Friday, Biden reflected on the way the COVID-19 pandemic has contributed to a global semiconductor shortage and said Russia’s war in Ukraine has deepened U.S. resolve to take action “so that our economic and our national security are not dependent on countries that do not share our values.”

Earlier, Biden toured an area of the facility producing semiconductor wafers. It was Biden’s first stop on the South Korea leg of his Asia trip.

South Korean President Yoon Suk-yeol, who spoke before Biden at the plant, called Pyeongtaek the “heart of the Korean semiconductor industry” and said he looked forward to deepening the partnership between Washington and Seoul on advanced technology and global supply chains.

Biden and Yoon are scheduled to hold a more formal bilateral meeting in Seoul on Saturday, marking the first face-to-face meeting between the two leaders after Yoon was elected earlier this year.