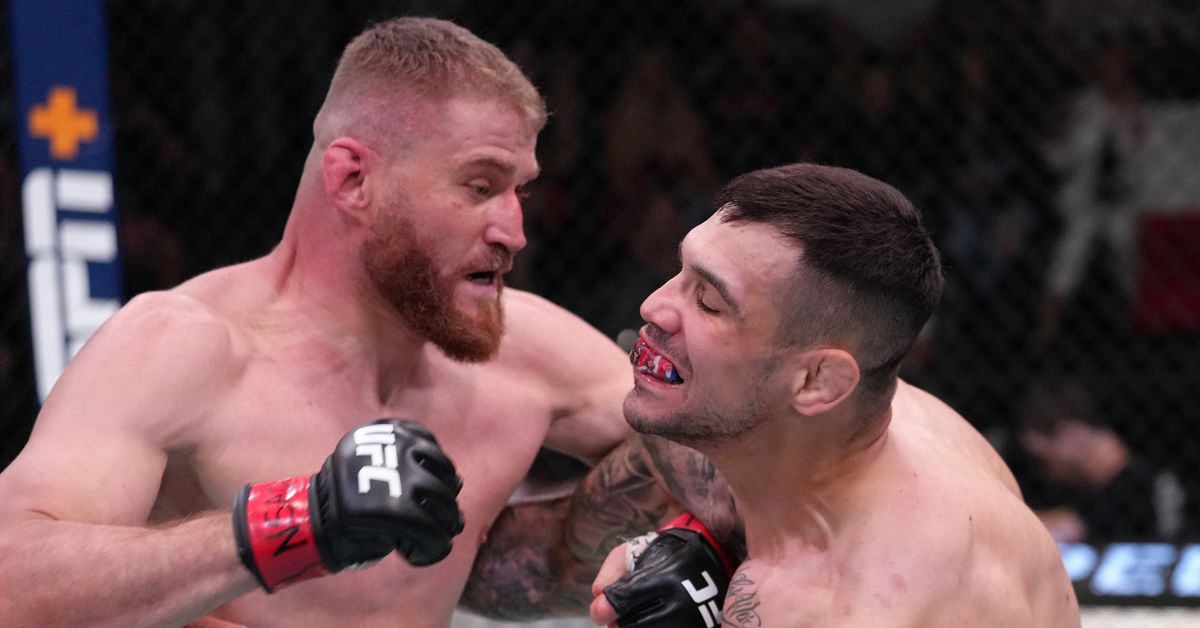 Watch Jan Blachowicz vs. Aleksandar Rakic full fight video highlights from the main event of UFC Vegas 54, courtesy of the UFC and other outlets.

Catch the video highlights below.

For more on Blachowicz vs. Rakic, check out the live blog by MMA Fighting’s Mike Heck.

Round 1: Bruce Buffer gets everyone fired up, and the two men face off — although much further apart compared to Friday’s staredown. They touch gloves and Rakic throws a jab before both fighters trade leg kicks. Slip from Rakic and Blachowicz throws a huge head kick that comes up short. Blachowicz already sporting a cut on his left eye less than a minute in. More leg kicks from Rakic, Blachowicz glances with a right hand over the top, but then scores with a hard kick to the body. Rakic with a right hand to the chest, the former champ answers with a body shot of his own. The jab of Rakic is starting to score early and often. Neither man taking a backwards step here. Left hook from Blachowicz stings Rakic who recovers quickly and throws a big overhand right. Rakic is switching stances after some heavy leg kicks from Blachowicz. Rakic shoots, Blachowicz defends, and both land clean, with Blachowicz getting the better of it. Final 30 seconds and Rakic’s leg is welted up. One more leg kick, and a combination from Blachowicz ends the round.

MMAFighting scores it 10-9 for Blachowicz.

Round 2: Nasty cut on that eye of Blachowicz, the doctor clears him and off we go. Rakic grabs a single and gets a takedown. Blachowicz has the right leg over the head of Rakic, possibly looking for a triangle and it’s locked in. Rakic escapes, they scramble, and Rakic ends up on top in full guard. Rakic trying to land some sort of damage, but Blachowicz doing a nice job keeping things close and defending. Rakic sneaks an elbow in as Blachowicz isn’t in much of a hurry to improve his position with two minutes left. Blachowicz gets his back to the fence and tries to stand up, Rakic doesn’t allow it to happen. Short left hands from Rakic who continues to maintain control. Final minute of the round and not much is changing in terms of position. Rakic lands a pair of short uppercuts, Blachowicz gets to his feet, but right as the horn sounds.

Round 3: Blachowicz smiling as Mark Smith gets them ready to go, and we’re off. The former champ comes out with a sharp combination. Jab from Rakic almost knocks the mouthpiece out of Blachowicz, ref stops quick. The action continues, Blachowicz lands a leg kick and Rakic steps back and his other knee gives out as he plants. Blachowicz moves in, but Mark Smith waves it off. Unfortunate end to a competitive fight.