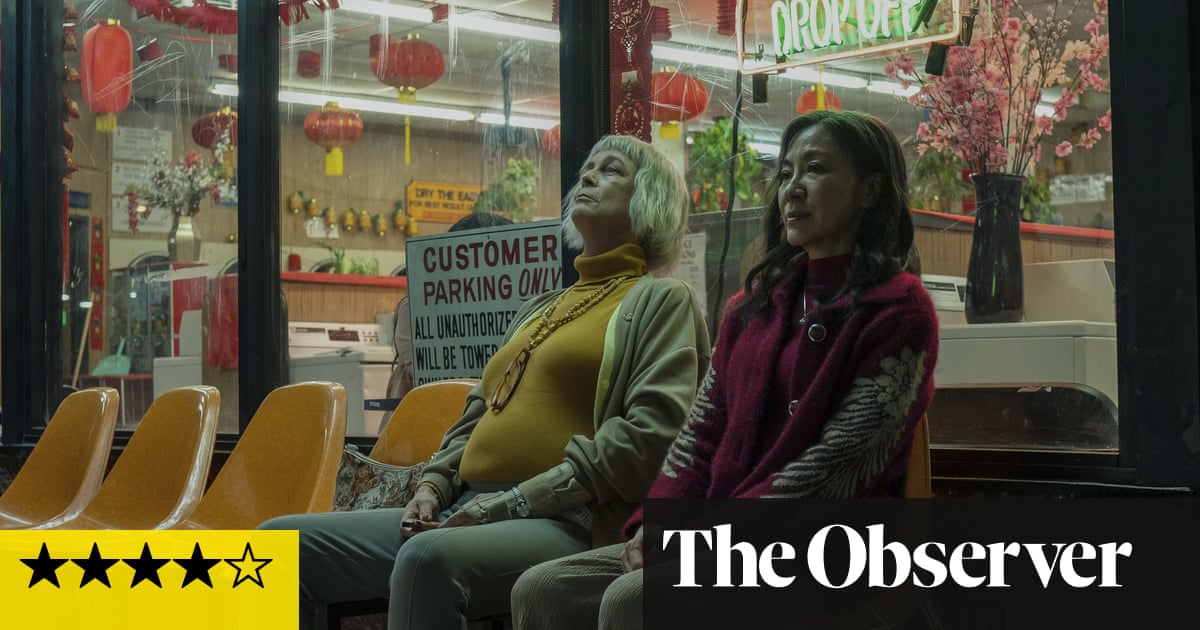 Last week, Jamie Lee Curtis sparked “internet feud” headlines when she gleefully declared on social media that her new film “out marvels any Marvel movie”. The multiverse-themed Everything Everywhere All At Once has indeed been giving Dr Strange in the Multiverse of Madness (which cost eight times as much) a run for its money, both financially and artistically. Punching way above its weight, this inventive indie pic boasts spectacular ambitions that belie its limited budget. Yet for all its madcap invention and frenzied visual wit, what drives this story of a woman trapped in a world of “laundry and taxes” is a tangible emotional wallop – that most “special” effect that franchise blockbusters so often fail to deliver.

Michelle Yeoh sinks her teeth into a kaleidoscopic role that cheekily draws on her own genre-hopping back catalogue. She plays Evelyn Wang, a disillusioned and exhausted Chinese American woman who runs a laundromat with her smilingly disappointing husband, Waymond (Ke Huy Quan, who first rose to fame as Short Round in Indiana Jones and the Temple of Doom). Together, they are trying to fend off IRS auditor Deirdre Beaubeirdra, played with a jobsworth sneer and a frightening fringe by Jamie Lee Curtis.

Over the years, Evelyn (who swoons over musical romances on TV) has harboured dreams of being everything from a singer or a novelist to a therapist. But in real life she’s consumed with worries about her daughter, Joy (Stephanie Hsu), and her visiting father, Gong Gong (James Hong), too scared to tell the latter that his granddaughter is gay, and too uptight to tell the former that she loves her anyway.

Then, in a lift at the tax office, the usually placid Waymond is suddenly transformed into an action-man version of himself from another multiverse, on a Matrix-style mission to find “the one” who can save them from Jobu Tupaki, an all-powerful “verse jumper” who is threatening to tear reality apart. “Every rejection, every disappointment has led you to this moment,” he insists, revealing that an infinite number of alternative possibilities await our antiheroine, and declaring that although she is currently living “the worst you”, Evelyn is in fact “capable of anything… because you are so bad at everything”.

Film-making duo Daniel Kwan and Daniel Scheinert (collectively known as “Daniels”) cut their teeth on music videos and internet shorts before making the extremely odd “farting corpse” movie Swiss Army Man. For Everything Everywhere All At Once they reportedly took inspiration from the Japanese artist Ikeda Manabu, whose work (“so intricate, so detailed, so dense”) can seem chaotic in closeup yet somehow clear from a distance. The same is true of this movie, which delights in sending its protagonist into a baffling array of increasingly absurd worlds (in one, people have hotdogs for fingers) while retaining recognisable overarching structures.

For all its fantasy trappings, this is a film with down-to-earth concerns: mothers and daughters, husbands and wives, coming of age and coming out, dreams and disappointments, otherness and belonging, generation gaps and information overloads. Like the sci-fi stories of Kurt Vonnegut’s alter ego Kilgore Trout, or Douglas Adams’s increasingly influential Hitchhiker’s Guide to the Galaxy, the narrative may be out of this world but the problems it addresses (a life of “fractured moments, contradictions and confusion” in which things only fleetingly make sense) are unmistakably human.

Alongside 90s hits such as The Matrix and Fight Club, the Daniels litter their upstart movie with grand allusions to Stanley Kubrick’s 2001, Wong Kar-Wai’s In the Mood for Love and (most bizarrely) Pixar’s Ratatouille, all tumble-dried with elements of Jackie Chan martial arts epics, Mexican luchador movies and the DIY ethos of Michel Gondry. A rich and complex score by American experimental band Son Lux throws everything and the kitchen sink into the mix on a soundtrack that slips from head-spinning psychedelic noises to melancholy fragments of Debussy’s Clair de Lune. The result may be a tad overlong and convolutedly overstuffed, but it made me laugh, cry and think – which is more than can be said for many a Marvel flick.