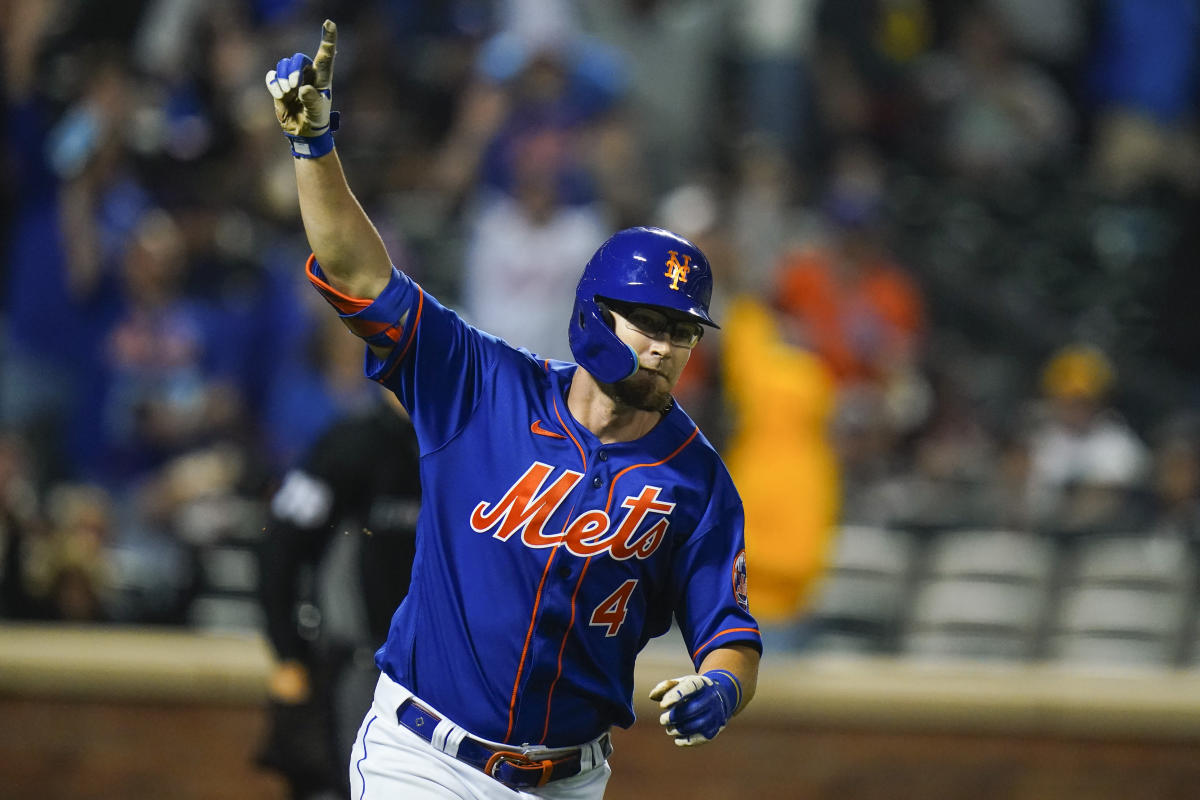 NEW YORK (AP) — Patrick Mazeika hit a tiebreaking homer leading off the seventh inning in his first major league game this season, and the New York Mets took advantage of some sloppy Seattle defense to beat the Mariners 5-4 on Saturday night.

Starling Marte tripled, doubled, singled and scored three times for the Mets, who squandered a 4-0 lead when Jesse Winker tied it with a three-run homer off Chasen Shreve in the top of the seventh.

Mazeika, batting ninth, laced the first pitch from reliever Andrés Muñoz (1-1) inside the right-field foul pole for his second career home run. New York’s third-string catcher was called up from the minors Friday when top backstop James McCann went on the injured list with a broken bone in his left wrist.

Adam Ottavino (2-1) pitched a scoreless eighth, retiring Ty France with a runner on third to end the inning.

Edwin Díaz struck out all three batters in the ninth for his eighth save, fanning Winker with a 100 mph fastball for the final out to the delight of 37,148 fans who waited out a rain delay at the start on a misty night.

Winker was booed throughout and waved to the crowd after rounding the bases on his home run — part of a back-and-forth with Citi Field fans that dates back to his days with Cincinnati.

Chris Bassitt carried a shutout into the sixth, and slumping Francisco Lindor drove in two runs for the Mets, who dropped the series opener 2-1 on Friday night. They’ve lost consecutive games only once this season (April 10-11).

Prized prospect George Kirby gave up three runs — one earned — and three hits over four innings in his second big league start for the Mariners. Kirby, who grew up in suburban Rye about 22 miles north of Citi Field, had a loud cheering section of fans who stayed on their feet approximately 20 rows up from the Seattle dugout on the third base side.

The punchless Mariners have dropped 13 of 17.

Following a 68-minute delay before the first pitch, New York benefited from two calls that were overturned by instant replay in the first inning.

After a hit batter and consecutive walks loaded the bases with two outs, Bassitt picked off Eugenio Suárez at second base. Suárez, shaken up on the play after sliding headfirst into Jeff McNeil‘s knee, was initially called safe before the Mets challenged.

In the bottom half, Marte was originally ruled out at third base on his triple. He scored when Lindor grounded a single through a drawn-in infield.

Suárez’s error at third base helped New York score two unearned runs in the third on sacrifice flies by Lindor and McNeil. A leaping catch by Steven Souza Jr. at the right-field fence on McNeil’s drive prevented more potential damage.

Souza dropped Marte’s routine fly in the fifth before throwing to second for a forceout on the play. But it still might have cost the Mariners, because it was the speedy Marte running all the way from first to score on Pete Alonso’s two-out double, rather than Brandon Nimmo.

Souza’s soft RBI single with two outs in the sixth cut it to 4-1 and chased Bassitt, who struck out eight.

Seth Lugo retired Adam Frazier with the bases loaded to end the inning, but gave up consecutive singles in the seventh before Shreve was summoned to face Winker.

Mets manager Buck Showalter mentioned before the game how excited he was that Shakira would be at Citi Field. The singer posed for photos outside the clubhouse with Showalter and several players.

The game was played with only three umpires on the field. About 30 minutes before the first pitch, the Mets were informed that crew chief Jerry Layne was unavailable. Hunter Wendelstedt slid over from second base to take Layne’s spot at first.

Mariners: RHP Erik Swanson was placed on the 15-day injured list with elbow inflammation, leaving Seattle without one of its top arms in the bullpen. LHP Danny Young was recalled from Triple-A Tacoma.

Mets: LF Mark Canha was rested against a right-hander in favor of Travis Jankowski. Alonso was the DH, with Dominic Smith playing first base.

Mariners: Reigning AL Cy Young Award winner Robbie Ray (3-3, 4.22 ERA) pitches Sunday afternoon when Seattle wraps up its first visit to Citi Field with the finale of the three-game series. Ray struck out a season-high 10 last time out in a win over Philadelphia. The left-hander is 3-1 with a 2.60 ERA in six career starts against the Mets.