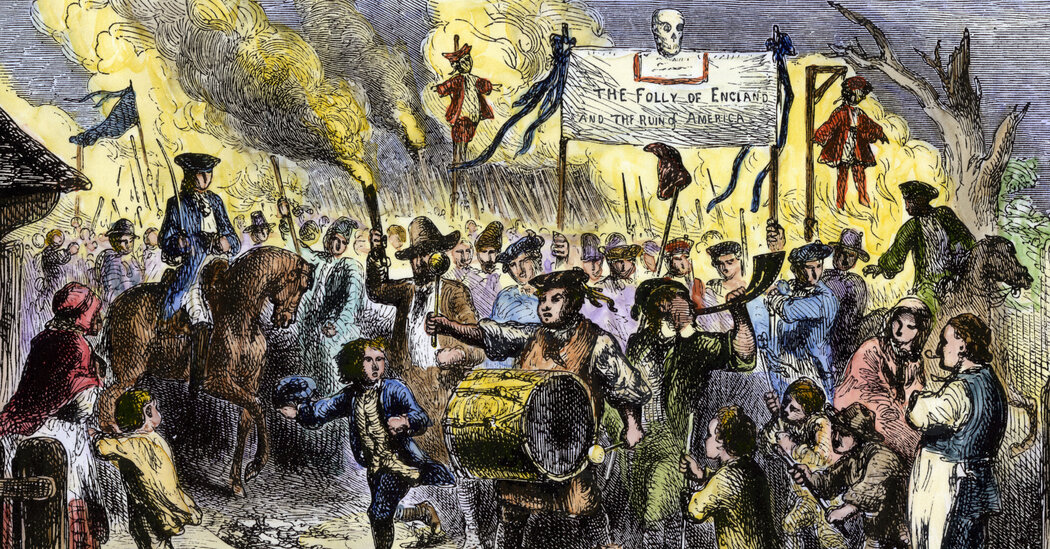 Then there’s the claim, from The Washington Post, that this protest is the latest in a new trend. But protests of this sort go all the way back to the revolutionary era, when crowds and mobs in Boston and other cities protested (and even attacked) British officials at their homes. In “Political Mobs and the American Revolution, 1765-1776,” the elder Arthur Schlesinger recounts the “pillaging of Lieutenant Governor Hutchinson’s mansion in Boston in August 1765 during the Stamp Act disorders.”

Not content with gutting the structure from ground to roof, the “hellish crew” scattered abroad Hutchinson’s historical papers and the manuscript of the second volume of his “History of Massachusetts Bay.”

Patriot elites, unsurprisingly, developed a theory by which these actions were justified. “Unconstitutional legislation, in Whig theory, created the need for constitutional self-defense,” the legal scholar John Phillip Reid explains in “A Defensive Rage: The Uses of the Mob, the Justification in Law, and the Coming of the American Revolution.”

Adams hated mobs. But even they, he thought, served a purpose under the right circumstances. Or, as he wrote in a 1774 letter to his wife, Abigail: “These private mobs I do and will detest. If popular commotions can be justified in opposition to attacks upon the Constitution, it can be only when fundamentals are invaded, nor then unless for absolute necessity, and with great caution.”

He was making a judgment call. So are we. Does a judicial attack on the right to have an abortion justify the protest of Supreme Court justices at their homes?

It’s easy to see why Republicans say no; they not only want this outcome but also are deeply invested in the legitimacy of a court they worked so hard to shape. Allowing protests of this sort is counterproductive.

But from the perspective of a citizen who believes that the right to have an abortion should be enshrined in the Constitution — and who has no other way to persuade or influence or even speak to a Supreme Court justice — it makes complete sense. Even if the decision to overturn Roe v. Wade is set in stone, protest — on their streets, in front of their homes — allows those citizens to be heard.

Which is to say that in evaluating the recent protests, we have one important question to answer: Who has the right to speak directly to the Supreme Court? The elites who shape the court or the people who must live under it?