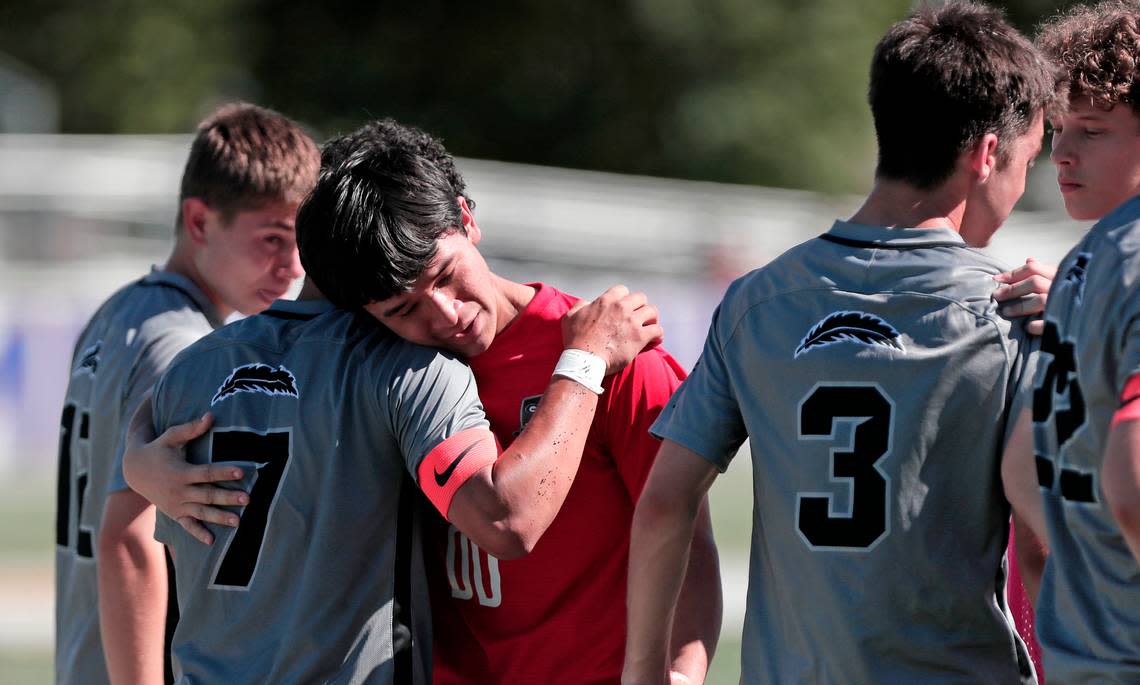 During his five seasons as coach, Kevin Heise has built the Gray Collegiate boys soccer program into a championship contender. The only thing lacking is a state title.

The War Eagles hoped to wrap up the program’s first championship Saturday, but S.C. powerhouse Christ Church scored two goals in the second half to win the Class 2A championship 2-0 at Irmo High School.

“My heart hurts for my team,” Heise said. “You want to go out on top but unfortunately that won’t happen. But they have set the standard at Gray Collegiate. I might be off here a little bit but as far as Lexington County teams, they won more games than any other team in Lexington County. … That says a lot about the quality and caliber of this group. Just unfortunate we didn’t get the result today.”

It was Christ Church’s second straight championship and 14th overall, which is third most in state history. The Cavaliers have one more title than Riverside, which played for the 5A championship later Saturday evening.

Heise, one of the state’s winningest coaches with more than 500 victories, is still searching for his first state title. This was his fourth championship appearance, with the other three coming when he coached at Brookland-Cayce.

With the direction the War Eagles are headed, it might not be Heise’s last chance at getting that elusive first championship. Gray Collegiate finished 20-4-2, the second most wins in school history behind the 2018 team. That squad went 23-4 and lost to St. Joseph’s in the state semifinal.

This year’s group played a demanding schedule, with games against Class 4A and 5A playoff teams, to get Gray ready for a deep postseason run.

The War Eagles were coming off an emotional win in penalty kicks against Andrew Jackson in the semifinals and had some momentum early Saturday against the Cavaliers.

Carlos Vasquez had an opportunity early in the match and missed just off the post.

“It could have been a whole different story if that went in there early,” Heise said.

JT Gardner also had a chance on a free kick in the 36th minute, and the War Eagles also had another shot a minute later. The teams were tied 0-0 at halftime.

Jojo Ejiri put the Cavaliers up 1-0 with a goal in the 47th minute. Woods Windham made it 2-0 two minutes later.

Aiden Spinks got the shutout in goal. It was just the second time the War Eagles were shut out all season, with the other coming against Chapin, which played for the 5A championship Saturday.

“We played great. We knew what Gray Collegiate was all about,” Christ Church coach Anthony Esquive said. “That’s a fantastic program, one that we have tremendous respect for. We knew it was going to be a battle. It was the two best teams in 2A going at it, and I feel fortunate that we were able to prevail.”

Class 5A Boys: Chapin vs. Riverside