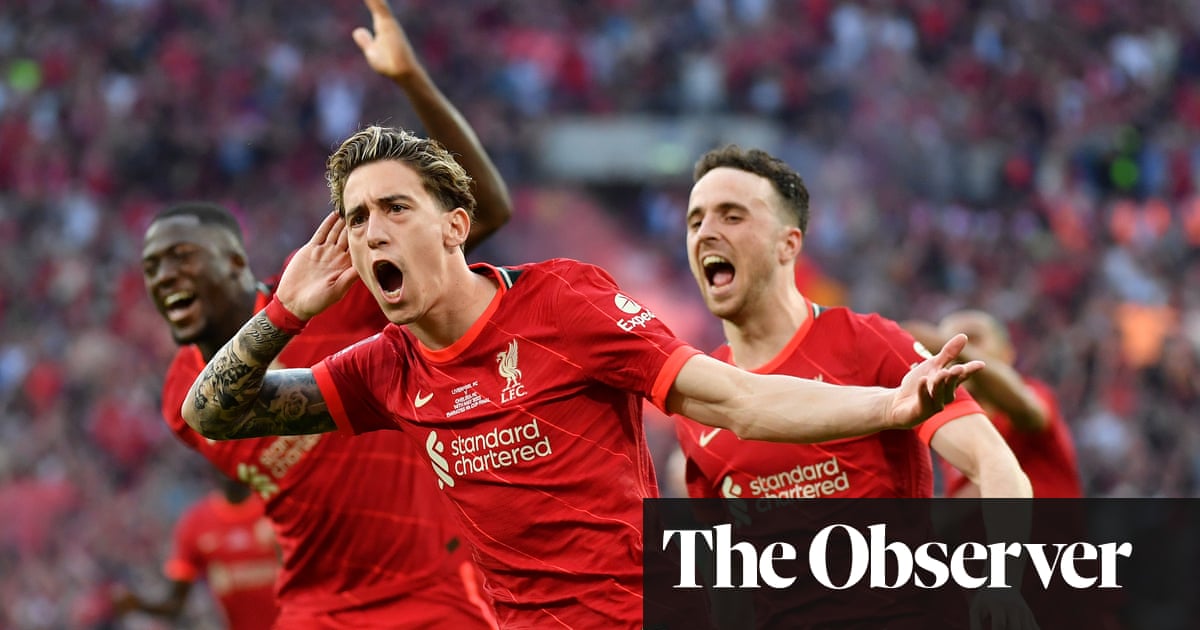 The sense of deja vu was unmistakable. For the second time this season Chelsea and Liverpool went toe-to-toe in a Wembley final and, as in the Carabao Cup at the end of February, the margins were bone-jarringly tight. Everybody knew that it could come down to one moment – a flash of magic or even an error.

It was not as open as the previous instalment, the legs heavy after a long season, after everything that both clubs have lived. For Chelsea, there has been the emotional drain of the impending takeover. Liverpool, meanwhile, have had their eyes on a historic quadruple, the challenges remorseless. But there were still chances at both ends and decent ones, too. As each went begging, so the tension was ratcheted up further.

For a snapshot of the drama, look no further than the 60 seconds or so from the 83rd minute when Liverpool created two openings and hit each post at the end of them. First the non-stop Luis Díaz shot against the outside of the right-hand upright and then Andy Robertson, arriving to meet a cross from the substitute James Milner, crashed his effort against the other one.

Chelsea had craved what Thomas Tuchel called an “injection of positivity” and they almost got it in normal time, before the slow and inevitable trudge towards penalties, which was how the Carabao Cup final was decided, Liverpool winning a marathon shootout 11-10.

There were big opportunities for Christian Pulisic and Marcos Alonso in the first half and Alonso again after the interval. The left wing-back also rattled the crossbar with a free-kick. The ball simply would not go in and nor would it for Liverpool and, in particular, Díaz.

And so we went once again, to the ultimate test of nerve. It was the Chelsea substitute goalkeeper Kepa Arrizabalaga who had cracked last time, lifting his kick high over the crossbar. This time, there were more misses: César Azpilicueta in round two for Chelsea, Sadio Mané at the end of round five, whose kick to win it was brilliantly saved by Édouard Mendy, his Senegal teammate.

Chelsea’s reprieve did not last. Alisson was the Liverpool hero in the second round of sudden death, going the right way to deny Mason Mount and clearing the way for the Liverpool substitute Kostas Tsimikas to win it. Red flares lit the scene. With the FA Cup, Jürgen Klopp had completed the set of trophies with Liverpool.

The occasion was framed by the meeting between the teams in the previous final, which brought Liverpool their first trophy of the season – and by what has happened to Chelsea since. Three days before that previous encounter, Roman Abramovich’s hold on the club begun to unravel when Russia invaded Ukraine and Chelsea have been forced to operate under a cloud.

Many things have been placed on hold and Tuchel has not tried to claim that the dressing room has been unaffected. Under beautiful blue skies and after Pete Tong had finished rolling out a few classics, Chelsea’s plan was to fire an upsurge.

The atmosphere pulsed and it was Liverpool who laid down the early marker, with Díaz prominently involved down the left. Tuchel preferred Trevoh Chalobah to Azpilicueta on the right of a back three, mainly for his greater pace, but it was a worry for Chelsea when Díaz got away from him easily in the early stages to cross. Thiago could not stretch enough to reach the ball.

Liverpool repeatedly worked it towards the left at the outset and Trent Alexander-Arnold created a huge chance for Díaz with a sumptuous outside-of-the-boot pass. Díaz was away from Chalobah but Édouard Mendy denied him by taking the sting out of his shot, with Chalobah then clearing from in front of the line.

Chelsea battled back after a tough start to the first half and Christian Pulisic, working off the left, blew one decent chance and created an even better one for Alonso.

Tuchel wanted to create an overload down the right through Reece James and Mount, with Pulisic drifting across for the final ball. Chelsea worked it nicely on 23 minutes, Mount cutting back a low cross and Pulisic arriving to sweep for the far corner. He dragged it narrowly wide but Chelsea could feel a surge of confidence.

Alonso had to do better when Pulisic played him in having taken a pass from Mount, who was really in the mood. The weight on the ball from Pulisic was perfect but Alonso’s first touch was poor and it made Alisson’s block a formality. The goalkeeper had been characteristically quick to get out.

Klopp had to work without Mohamed Salah from the 32nd minute, after the winger felt a twinge that will be a worry for Liverpool in the countdown to the Champions League final against Real Madrid on 28 May.

On came Diogo Jota, who wasted a fine chance before the interval. Mané led a break after Mateo Kovacic had lost possession, initially going right, but when his team came back to the other side Andy Robertson crossed and Jota timed his run well. He lifted the volley high.

Chelsea finished the first half with Romelu Lukaku firing a half-chance high. They restarted with the bit between their teeth and by creating a flurry of chances, with Alonso so close to the breakthrough.

He dragged past the far post after Alexander-Arnold got caught under a cross from Pulisic and then hit the crossbar with a whipped free-kick from a tight angle on the right. Pulisic also worked Alisson after a Lukaku lay-off.

Díaz spun on the edge of the area and rasped a shot just wide, and it felt as though the game was rising to the boil. Tuchel whipped up the Chelsea fans; he sensed that something was coming.

Tuchel asked James to defend closer to Díaz to help out Chalobah but Liverpool pushed again, squeezing higher, connecting their passes and getting up the sides. There was another good chance for Jota after he was found by Naby Keïta, only for the forward to drag wide wastefully.