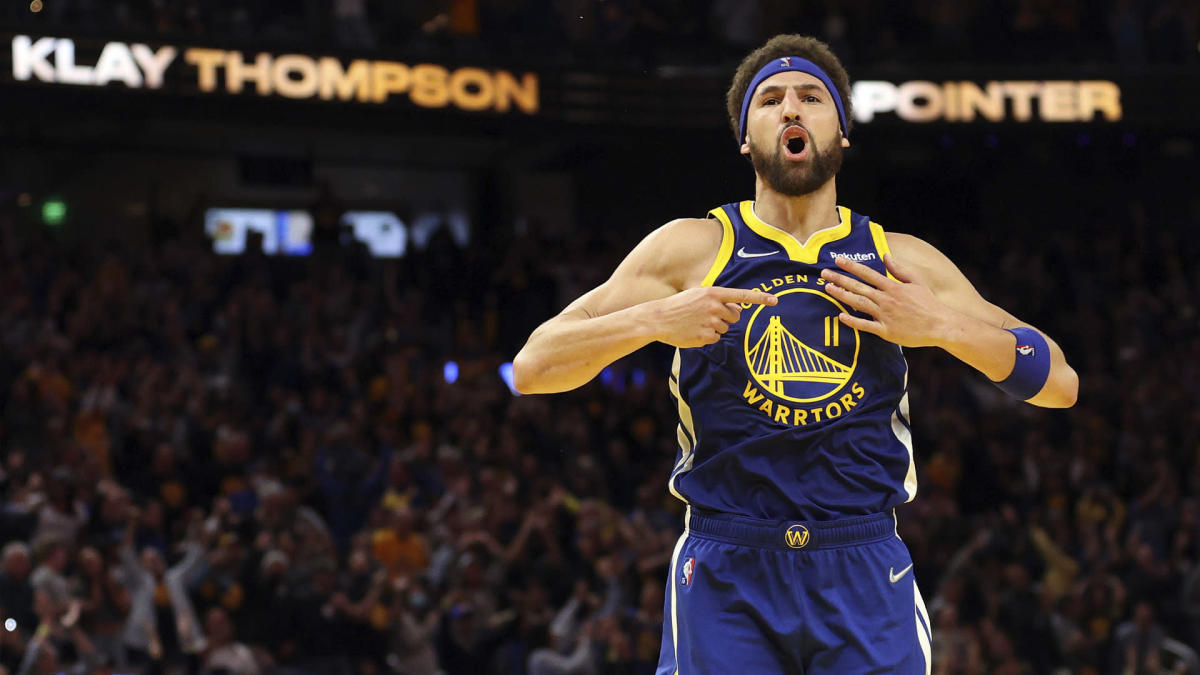 SAN FRANCISCO — Klay Thompson beat Mike Brown to the punch. Thompson has only known one NBA home since the Warriors drafted him back in 2011. But Brown, the Warriors’ acting head coach with Steve Kerr out to COVID-19, has been along for the ride for more than half of Thompson’s pro career since joining Golden State’s staff starting in the 2016-17 season.

Brown has seen the highs and lows Thompson has endured. He wanted to thank him for his latest star showing Friday night at Chase Center following the Warriors’ 110-96 win over the Memphis Grizzlies to close out the Western Conference semifinals. But Thompson had a message for his coach first.

One that only Klay could say at that exact moment.

“When I went to give him a hug, I was ready to tell him ‘I love you and great job,’ ” Brown said to reporters. “I started saying that. It was crazy, the only thing he said was ‘Mike Brown, I’m gonna miss you next year when you’re in Sacramento. I’m gonna miss you yelling at me, telling me to get back on transition defense.’

From the time the Warriors made him their top pick in the draft nearly 11 years ago, Thompson has been nothing short a 1-of-1. His latest reminder sent the Grizzlies home for good.

Thompson has a long history of heroics when playing a Game 6. Maybe there’s something in his water, maybe it’s the smell of the sea. Whatever it might be, everybody knows what could, and likely, is about to happen when he steps on the floor for the sixth game of a playoff series.

Yes, it happened again. The second he let his first 3-point attempt fly, it was clear what we were in for.

Thompson ended his night and the Grizzlies’ season with a game-high 30 points. He went 11-for-22 from the field, made his first five 3-pointers and finished 8-for-14 from long distance. This wasn’t just a shooting display from the Splash Brother, but a complete game to get one step closer to the ultimate prize.

While making the nets drip in front of the home fans, Thompson also added eight rebounds, two assists and three blocks. Whether it was putting up points on the scoreboard, fighting for rebounds or playing sound defense on Grizzlies sharpshooter Desmond Bane, Thompson answered the call whenever the Warriors had to dial his number.

This one meant more.

“It felt better,” Thompson said of his latest legendary Game 6. “Honestly, especially the perspective I’ve gained from the injuries I’ve had. To now be able to compete at the highest level and be one of the final four teams, it’s a feeling that’s hard to describe, honestly.

“It’s truly amazing, it just inspires me to keep going because I think we still have great basketball ahead of us.”

The last time Thompson found himself in a Game 6, he put on a show to try and keep the Warriors’ season alive before seeing the next two-and-a-half years of his career taken away from him. He scored 30 points and made four of his six 3-point attempts in 32 minutes during Game 6 of the 2019 NBA Finals against the Toronto Raptors with the Warriors down three-games-to-two.

His final two points of that night were from the free-throw line after limping out of the tunnel with a torn left ACL. Thompson drained both free-throw attempts and even ran back on defense. There’s one Klay Thompson, and there’s only one Game 6 Klay.

Fast forward almost three years later, and the climax to Thompson’s first crack at a Game 6 since that heartbreaking night north of the border came on his final shot of the night. It was a 28-foot 3-pointer assisted by the other hero of the game, Kevon Looney, giving the Warriors a 105-92 lead with just under three minutes left, which forced a Grizzlies timeout.

The game finally felt out of reach, and the 32-year-old could finally let out all of his emotions from the last 35 months.

“Well, 30 sounds way better than 27,” Thompson joked of his reaction after his final 3-pointer of the win. “On top of that, had a lot of pent-up energy these last couple years, and to be in this situation and to seal the game there, it all came out.

“I just know how hard it is to get to this part of the season and it all just came out for me. And to see the Warrior fans, it’s a moment I tried to revel in for the few seconds I had.”

Draymond Green deemed his longtime teammate “the toughest and most competitive player I’ve ever played with.” Steph Curry called it a “different joy, a different energy.” In reality, all felt right with Thompson back on the mountain top with Game 6 calling his name.

The trio above has made the Western Conference finals for the sixth straight time when they’re all healthy. They advanced to the NBA Finals the previous five times. That’s where they’ve always felt they belong, and every bead of sweat that dripped to the hardwood Friday night in San Francisco has them four more wins from a showdown of the best of the West against the best of East.

Countless long days turned into sleepless nights. All the self reflection, all the hard work, all the questions that turned to answers was worth it.