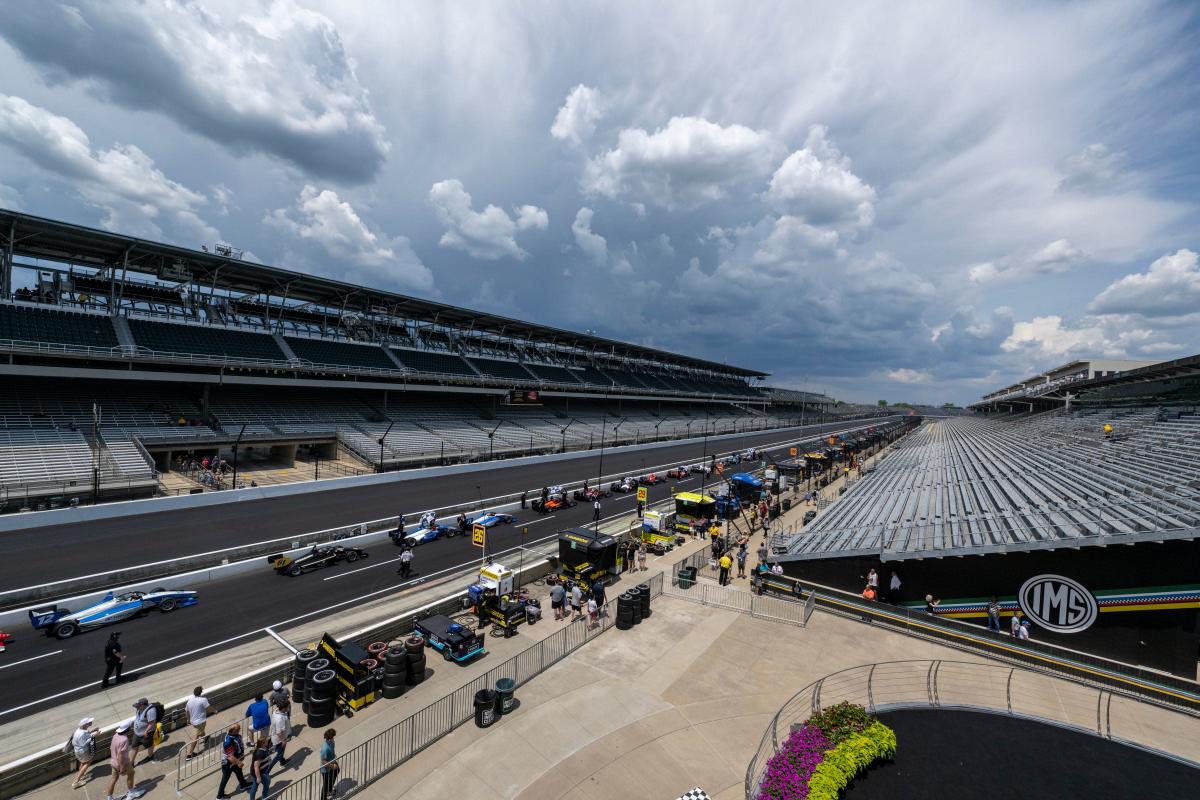 Will Power won the pole position, with IndyCar Series points leader Alex Palou joining him on the front row.

This is Power’s sixth pole position on the IMS road course, and he has won four times in those races, most recently in 2020. Power has won five times in 11 previous races on this course.

Simon Pagenaud’s win in 2019 from the eighth starting spot is the farthest back a driver has won from on this track.

Pacing the field (get it?): Tyrese Haliburton gets 1st IndyCar experience in 2-seater

Keep it here for more race coverage, and please remember to refresh.

Colton Herta takes the checkered flag over Simon Pagenaud under caution. Rounding out the top 5: Will Power, Marcus Ericsson and Conor Daly.

Herta earns his first victory of the 2022 IndyCar Series season and 7th in his career. He leads 50 of the 75 laps completed in often-rainy conditions that kept teams guessing which tire compound to use.

“That was the hardest race I think I’ve ever done,” Herta said about the frequently changing conditions. He also survived a “Tokyo Drift” style slide early in the race.

Mayhem: A full list of the crashes and chaos from IndyCar’s GMR Grand Prix

Herta’s previous best finish this season was fourth in the season opener at St. Petersburg.

Power, the pole sitter, who came into this race 4th in championship points, assumes the lead. Scott McLaughlin is 14 points behind, followed by Josef Newgarden (15), incoming points leader Alex Palou (25) and Herta (26).

Juan Pablo Montoya, who was running in the top 10, runs off the track, bringing out a caution to end the race. Fifty-three minutes of the race ran under green, while more than an hour came under caution.

Six drivers led the race and there were 10 lead changes. With the numerous cautions and need for rain tires, the average speed narrowly topped 90 mph.

Rooster tails are flying as the cars cut through a rain-soaked track. It’s Herta, Pagenaud, Power, Daly and Ericsson with 5 minutes remaining.

O’Ward, on slick tires, spins during the caution and gives up 2nd place. Simon Pagenaud, who started 20th, takes 2nd.

Colton Herta has better grip than Pato O’Ward and makes the pass for the lead. Scott McLaughlin can’t hang on and spins, prompting a caution.

The race leader does a 360-degree spin during the caution. He is still on slick tires for dry-track racing. Pato O’Ward, who is also on slick tires, takes the lead. Colton Herta, using rain tires, is 3rd.

Race officials declare the race will be timed the rest of the way, with 20 minutes put on the clock.

Colton Herta comes in for rain tires. He comes out in 5th place.

Scott McLaughlin narrowly takes the edge on Colton Herta coming out of the pits as the leaders take on slick tires for dry-track racing. They hope rain doesn’t return, requiring another pit stop for rain tires.

Bryan Herta, Colton Herta’s father and race strategist, one lap after this round of pit stops: “It’s raining harder now. Not sure we did the right thing. If we did (the wrong thing), we all did.”

Grosjean, trying to overtake Jack Harvey for 3rd place, heads into the grass after contact. In the meantime, Simon Pagenaud passes Harvey for 3rd.

Herta jumps from 3rd to 1st, and Scott Dixon un-laps himself but is at the end of the lead lap. Scott McLaughlin is 2nd and Jack Harvey 3rd.

If lightning strikes, the race could be called. But if it merely keeps raining, the race continues. Teams must decide whether to stay on track and hold position, hoping for lightning, or pitting to change tires and losing track position.

Brian Barnhart, Rossi’s race strategist, on taking on rain tires earlier than other drivers: “We talked about here on the stand and validated (Rossi’s request).”

Scott Dixon, who was leading, runs out of fuel short of his pit box. He needs a push from his crew. Dalton Kellett makes contact and there’s another caution. Marcus Ericsson leads, Kyle Kirkwood is second and Colton Herta is third.

The leader comes in, and Pato O’Ward assumes the top spot. O’Ward pits one lap later and Felix Rosenqvist leads.

Strategy may include the anticipation of storms northwest of the racetrack. A race is official at the halfway point, Lap 43, or if cars have been on the track for one hour.

We’re coming right up on the time for the next stop. Interested to see whether guys try and stretch until we have rain, throw on the wet tires early, or pit for normal tires and risk having to make an extra stop for rain tires.

Herta, Pato O’Ward, Felix Rosenqvist, Takuma Sato, Will Power is the running order at the front. Alexander Rossi, who has been involved in contact already, is 6th.

Today’s 3 cautions have either ended the days of, or severely hampered the races of 3 of the top-7 in points when we came into today.

Lap 20: Another restart, another caution

Newgarden, who has won two of the four IndyCar Series races in 2022 and entered this race third in points, makes contact with Alexander Rossi and Jack Harvey. Newgarden sputters to a stop.

Herta is up 2+ seconds on Pato O’Ward. Also in the top 5: Felix Rosenqvist, Will Power and Josef Newgarden. Series points leader Alex Palou, who stalled on the track, is 1 lap down and in last place. Kyle Kirkwoods leaves the track surface a second time.

Colton Herta started 14th, made an early tire change and survived a “Tokyo Drift” style slide in the opening laps. He leads Pato O’Ward and Felix Rosenqvist as racing resumes.

So, now that we can catch our breath, your top-10:

Alex Palou had left the track and stalled in the grass. He got back on the track, then stalled, prompting a caution.

Palou has stopped on track. He slid off near oval turn 2. Full course yellow #IndyCar #IndyGP

Colton Herta makes an incredible save while sliding. Several drivers come in to take on red tires. Kyle Kirkwood is off track after making contact with Rinus VeeKay.

Colton Herta on the radio about nearly losing it:

“That was pretty amazing, huh. Did not think that was going to happen.”

Strategy comes into play in a hurry. Colton Herta and Takuma Sato take on red tires on Lap 3. All drivers had started the rain on rain tires, which offer more traction in the rain but are slower. Felix Rosenqvist passes teammate Pato O’Ward for the lead.

There’s a lot of jostling among the leaders on the opening lap, but there are no accidents despite the conditions. Pato O’Ward, who started fifth, marched to the lead ahead of Alex Palou. Pole sitter Will Power was third.

Water remains on the track from rain earlier in the afternoon.

Though inclement weather remains a threat, there’s a plan to run the race today.

Rain is falling at Indianapolis Motor Speedway, though there has not been lightning. The track remains under a weather delay.

The Indy Lights race was red-flagged due to lightning near the Speedway. However, partly cloudy skies prevailed over the track. It could be a precursor for the IndyCar Series race scheduled to begin shortly after 3 p.m. ET.

Only 4 drivers starting on reds & only 1 in the top 16 (Graham Rahal) pic.twitter.com/zqknxD4dQ2

Wet and wild?: What to know if it rains during the race