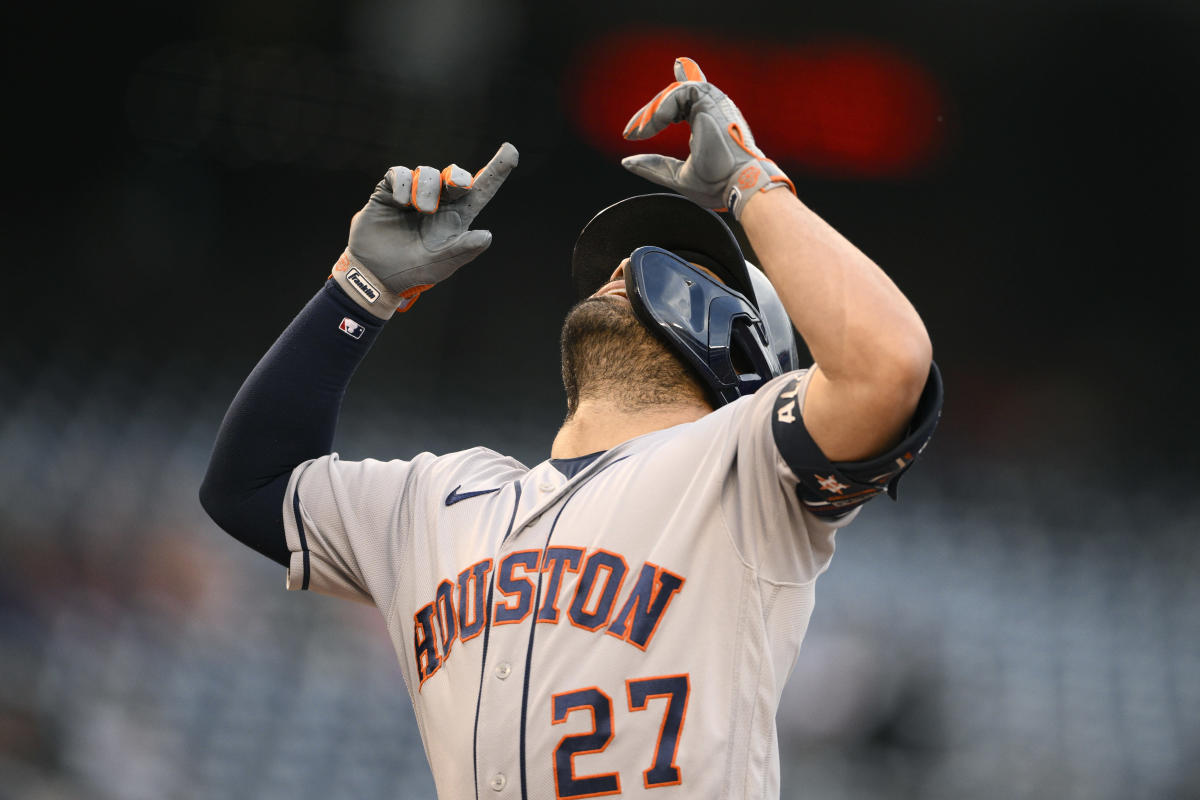 WASHINGTON (AP) — Jose Altuve homered on the first pitch of the game, and Yordan Alvarez and Yuli Gurriel also went deep and the Houston Astros extended their winning streak to 11 games with a 6-1 victory over the Washington Nationals on Friday night.

Houston manager Dusty Baker, who led Washington to consecutive NL East titles in 2016 and ‘17, won in his first game back at Nationals Park since he was fired after two seasons.

Framber Valdez (2-2) allowed one run over 7 2/3 innings to earn his first victory since April 7 and help extend the Astros’ pitching dominance. Houston has allowed just 12 runs during its streak with an 0.91 ERA in that stretch.

Houston staked Valdez to a 5-0 lead before he threw a pitch, its largest first-inning outburst since scoring six times at Seattle last July 26.

“They were attacking early and we hadn’t jumped anybody early like that in a while,” said Baker, who passed Leo Durocher for sole possession of 10th on the career managerial victories list with 2,009. “It feels good to get Framber a lead. Boy, that was some first inning.”

Baker was 192-132 in his two seasons in Washington, but was fired after the Nationals lost in the division series both years. He was introduced on the video board about 10 minutes before the first pitch Friday and was cheered by the smattering of early arriving fans.

It was the first meeting that counted between the franchises — who share a spring training facility — since the 2019 World Series. Dave Martinez, Baker’s successor, led the Nationals to their first championship in a series that saw the road team win all seven games.

Houston promptly made itself at home again in the nation’s capital, with Altuve belting Josiah Gray’s first offering to dead center for his third leadoff homer of the season and 24th of his career. Gurriel’s two-run homer capped the inning for the Astros, and Alvarez’s solo shot in the third made it 6-0.

Gray (4-3) allowed six runs and six hits in six innings while striking out five. He’s given up five homers in his last two outings after yielding three in his first five starts.

“Misses. First pitch, last pitch, he’s got to make a pitch,” Martinez said. “He can’t just think he’s going to throw a ball down the middle, especially when you’ve got a team like that. They hit fastballs. And today was a perfect example: When he missed early, he paid. They hit the ball hard.”

Valdez struck out six during his longest outing of the year, surrendering his only run on Alcides Escobar’s fielder’s choice grounder in the seventh.

“I definitely feel more comfortable that way knowing you already have a five-run lead,” Valdez said. “From there, it was just trying to stay focused and trying to protect the lead.”

Astros: SS Jeremy Peña did not play, a day after leaving the second game of a doubleheader at Minnesota with a knee injury. “Hopefully, he’ll be available in this series, but I’m not exactly sure when,” Baker said. … Altuve was lifted for a defensive replacement in the ninth for precautionary reasons after he slipped on the grass earlier in the game. Baker said he had already planned to give Altuve a day off Saturday.

Nationals: Escobar, who missed three games with an infected nail on his left index finger, returned to the lineup.

The thing that stood out most to Baker in his first trip to Nationals Park since 2017? The amount of construction.

“They’ve done a lot of building around here,” Baker said. “I wish I had invested in some of that, or some big cranes.”

Justin Verlander tossed Houston’s last no-hitter in 2019, but the Astros came within five outs of a combined no-no last year in Baltimore. However, umpire Angel Hernandez missed a called third strike on Maikel Franco, who proceeded to homer on the next pitch.

Hernandez worked at second base Friday, which means he’s in line to work the plate for Verlander’s scheduled start Sunday. And sure enough, Franco will be there, too; he’s Washington’s everyday third baseman this season.

Washington wore its dark blue alternate jerseys for the first time this season. The Nationals used the same jerseys throughout the 2019 World Series against the Astros, including in their Game 7 victory.

Nationals: RHP Erick Fedde (2-2, 3.90) is 3-1 with a 3.33 ERA in 12 lifetime appearances against American League opponents, but Saturday will be his first game against Houston.