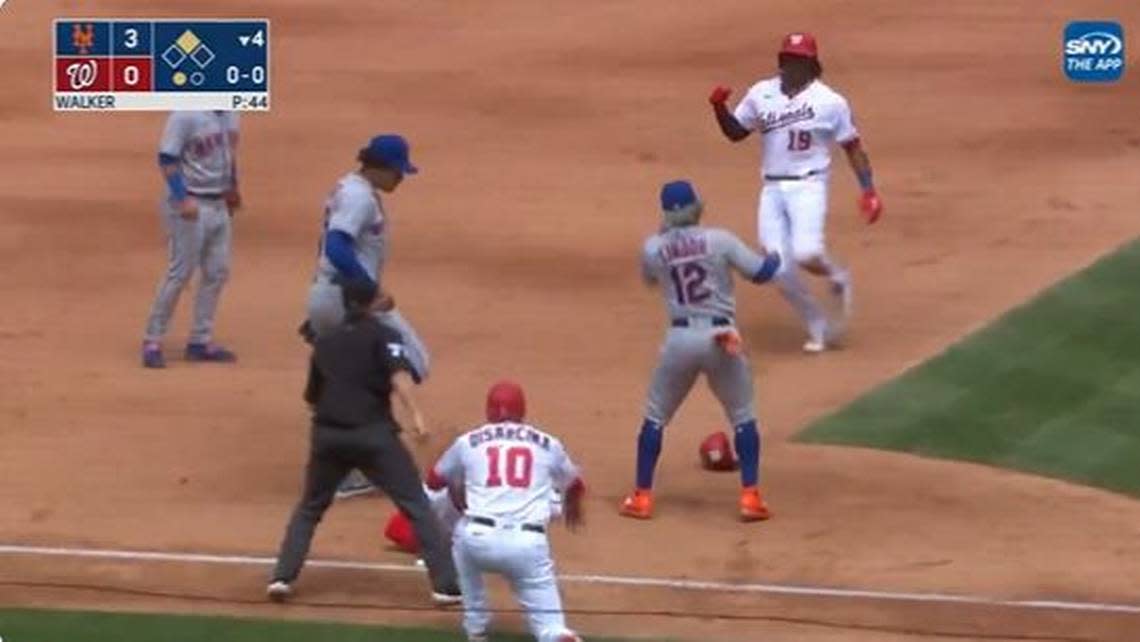 When is the last time you’ve seen a player attempting to run to third base but instead finds a teammate on the ground in front of the bag?

That scenario may seem impossible, but it played out that way Thursday for the Nationals in their 4-1 loss to the Mets.

Here’s what happened in the fourth inning in Washington: With Juan Soto on second base, Josh Bell grounded to Mets third baseman Luis Guillorme. Soto decided to run toward third and was caught after a rundown.

Soto ran into Mets pitcher Taijuan Walker, who applied the tag but threw wildly to second base as Bell was trying to advance.

Bell took off to third and had big dreams.

“Honestly, from my vantage point, I was thinking I was going to score because I didn’t think (Mets right fielder Starling) Marte was going to be right there,” Bell told MLB.com. “I thought there were going to be outfielders chasing that ball. So I was looking at (shortstop Francisco) Lindor, and I thought he was trying to deke me with holding his glove up.”

Lindor applied the tag to get the second out, but it wasn’t a double play as Mets writer Anthony DiComo noted.

My favorite part of this video is the Nationals coach imploring Bell to slide into third base as Soto was lying in front of the bag.

Mets manager Buck Showalter had all kinds of emotions about the two-out play.

Martinez, however, didn’t have goosebumps.

“J.B., once again, just trying to be overly aggressive,” Martinez told the Nationals’ website. But those are two big mistakes. We had a chance with some of our big hitters up there to drive in some runs, and we ran into two outs.”