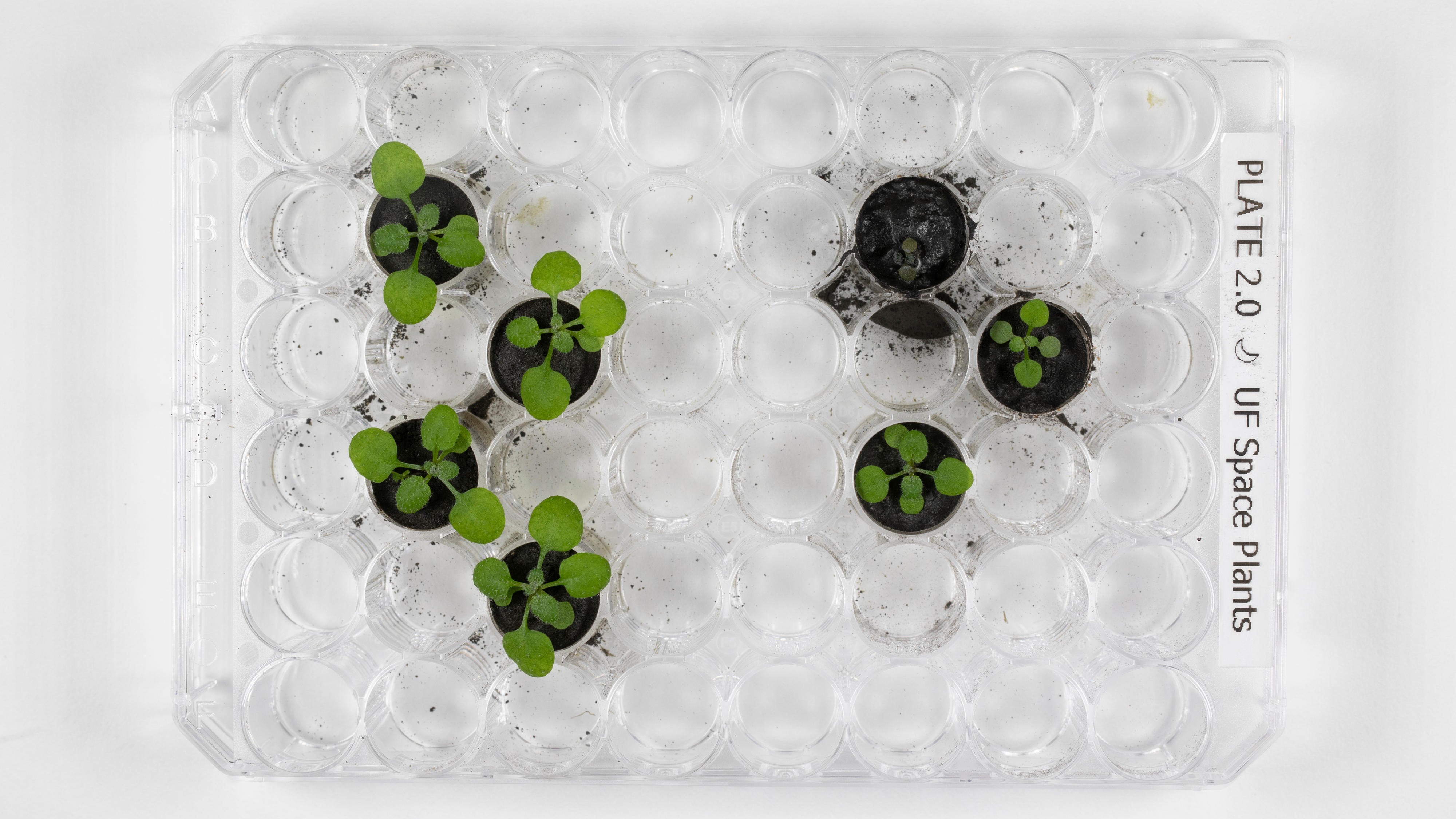 More than 50 years after astronauts brought the last moon-rock samples to Earth, scientists have successfully grown plants in lunar soil from three Apollo missions for the first time.

All the moon-soil plants grew slowly and relatively poorly, but those grown in samples that had been more exposed on the lunar surface tended to do the worst, and genetic analysis showed changes indicative of stress. The poor growth might be cause for concern: As NASA prepares to send astronauts back to the moon through its Artemis program — and eventually even to Mars — being able to grow food in extraterrestrial soil during long missions will become increasingly important.

“The ability to take plants successfully with us to the moon is… how we’ll grow our own food [and] how we’ll stay there for a while without resupply,” Robert Ferl, a professor of horticultural sciences at the University of Florida and an author of the study, said in a virtual news conference held on Wednesday (May 11). He also noted that growing plants on the moon could have other potential uses, including purifying air, removing carbon dioxide humans breathe out and producing clean water.

Related: NASA fed Apollo 11 moon rocks to cockroaches (and then things got even weirder)

For this study, the researchers used lunar soil samples taken during Apollo 11, 12 and 17, between 1969 and 1972. In all three samples, they grew a common lab specimen, a small plant called thale cress (Arabidopsis thaliana). For comparison, the scientists also grew the thale cress in a type of soil made from volcanic ash found on Earth, called JSC-1A by NASA, meant to simulate lunar soil, which is powdery and full of abrasive glass fragments.

“The fragments are actually quite sharp and angular,” Stephen Elardo, a geologist at the University of Florida and an author of the study, said in the news conference. The lunar soil also contains bits of metallic iron, and the glass fragments trap pockets of gasses, which volcanic ash doesn’t fully replicate.

The researchers were able to grow Arabidopsis in all three samples. The plants fared the worst in the Apollo 11 soil, which was the most “mature,” meaning the soil had been the most exposed to the lunar surface. (Because the moon lacks a protective atmosphere like Earth‘s, its surface is pummeled by meteorites, the fragments of atoms that scientists call cosmic rays and the constant stream of charged particles that flows off the sun.) The plants grew better in the Apollo 12 sample, which was less mature, and in the Apollo 17 sample, which was the least mature.

All the plants grown in the lab-made volcanic ash grew notably faster and larger than any of those in the lunar soils.

Moreover, a genetic analysis of the plants revealed that compared to the plants grown in volcanic ash, those grown in lunar soil expressed many genes related to salt, metal-associated and oxidative stress.

The Apollo 11 plants expressed changes in 465 genes, while Apollo 12 plants expressed 265 genes at different rates and Apollo 17 plants 113. Most of these changes were stress-related. When they grouped the plants by appearance, they found that plants which looked the worst — tiny and a reddish-black color — also had the most genetic changes associated with stress.

The results suggest that soil that is more exposed to the lunar surface is worse for plants, which may be because of changes caused by exposure to cosmic rays and the solar wind, the researchers wrote. If this is true, the researchers argued, soil from younger parts of the moon could be more effective in growing healthy plants. Although even the healthiest of these plants would be stunted and slow-growing, food they produce would not necessarily be harmful and could still be nutritious. In fact, many types of produce with dark pigmentation, like cranberries and blueberries, are valued for their antioxidants produced in response to oxidative stress.

Eating plants grown in lunar soil like this may be “likely not to pose any threat to humans,” Anna-Lisa Paul, a horticultural scientist at the University of Florida, said in the news conference. “It’s hard to say, but it’s more likely that the chemicals that plants produce in response to stresses are ones that also help human stresses as well.” She said that future research would be needed to explore how the lunar soil might impact the nutritional value and quality of food grown in this soil.

It’s also clear from this research, the scientists said, that simulated lunar soil isn’t an effective substitute for the real thing in an experiment like this, despite some similarities. Growing plants in lunar soil permanently changes its chemistry, which is why an experiment like this was never previously done with the “precious natural treasures” that are the Apollo samples, Paul said. But the exact chemistry of lunar soil is unique and can provide scientists with insights that simulated soil never could.

“The devil’s in the details,” Elardo said. “And the plants are concerned about the details.”

The research was published on May 12 in the journal Communications Biology.