Recently, developer The Game Bakers announced it would release an unexpected update to Furi, its stylish mashup from 2016 of action and bullet hell, where players fight a parade of demanding bosses. This update, featuring a new character and an upgraded version for PlayStation 5 players, would be released on PC, PlayStation 4 and 5, and Switch. Very specifically, it would not be released on Xbox, even though Furi originally released there. Which prompted some understandable frustration from folks who exclusively play on Xbox.

“We have heard all of you who played Furi on Xbox and we understand your frustration,” reads a series of tweets from The Game Bakers, trying to explain why it’s skipping Xbox. “We are a small indie team and we couldn’t find the time and budget to make that port.”

Furi is the definition of a cult classic, a game with a small but dedicated audience that’s maintained a constant word of mouth about how great it is, helping it sell over time. But it didn’t become a cult classic on every platform, and specifically, it didn’t catch fire on Xbox, a space where, according to the developer, the best path to success is Game Pass or bust.

All of this gave the studio immense pause when it was considering revisiting Furi in 2022.

The game has sold “year after year,” according to The Game Bakers co-founders and president Audrey Leprince in an interview with Waypoint, and a break in-between major projects presented an opportunity for The Game Bakers to tweak and add more to Furi.

The problem, however, is that updating a game isn’t as simple as pushing a few lines of code and re-exporting the art at a higher resolution. There are huge logistical challenges.

“Outside of the game design, code and assets for the new [character],” said Leprince, “we needed to update an old game completely on all platforms: update engine, SDKs [software development kits], middleware, all the platform-specific content, test all those builds, pass platforms check and publish it again.”

It’s a lot of i’s to dot and t’s to cross, and came just after shipping its last release, Haven, a game about two space lovers leaving their lives behind to carve out something new. Haven shipped across many platforms simultaneously—PC, Switch, PlayStation 4, PlayStation 5, Xbox One, Xbox Series S, Xbox Series X—and required navigating the publishing requirements across multiple regions, including Europe, both Americas, Japan, and Asia.

Plus, the numbers didn’t lie. Furi on Xbox was selling “less and less,” and according to Leprince, and were under “a third” of sales on Switch, frequently seen as one of the better places to sell indie games in the larger crapshoot of the marketplace. Compounding the issue was an inability to secure future promotions for Furi on Xbox’s storefront for increased awareness, and Haven “didn’t sell at all” on Xbox, outside of its Game Pass partnership.

You can see how the sales break down explicitly, according to this chart provided by The Game Bakers, first showing how it looks with Game Pass downloads: 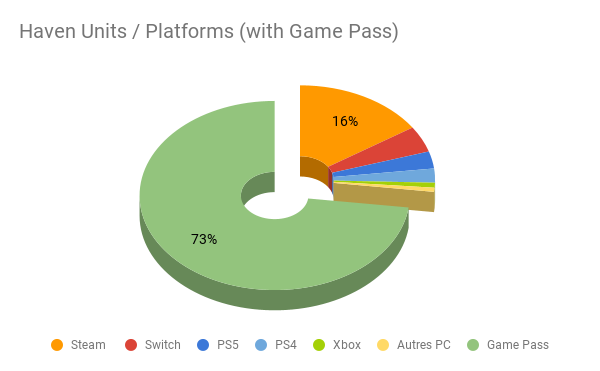 And here, not including Game Pass: 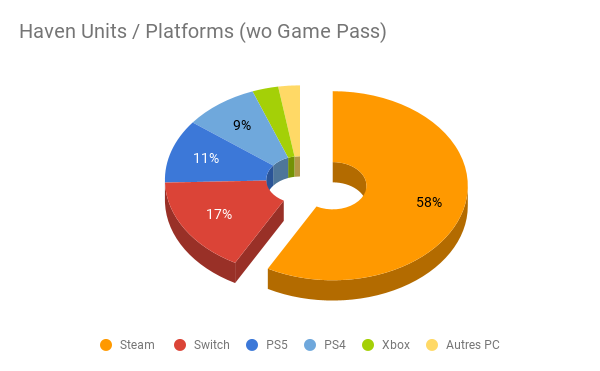 “We talked to the team at Xbox to see if there was a way to get some support, but Furi didn’t align with the Game Pass strategy focused on new titles,” said Leprince. “This is why we took the decision not to bring the DLC to Xbox at launch: the chances the investment was not going to recoup were high.”

“Unfortunately, without Game Pass, it is also very hard for many indie games to be visible on Xbox.”

Because The Game Bakers self-funds and self-publishes its games, the math has to add up.

For context, one-third of Furi’s budget, according to Leprince, was paid for by a PlayStation Plus partnership with Sony, while one-fourth of Haven’s budget was paid for by a Game Pass deal with Microsoft. Both meant the games were briefly “free” on both platforms.

“Being self-published is a different exercise than having a publisher for sure. It gives us a lot of independence creatively at least,” said Leprince. “But each game also requires a lot of business development and partnerships. We are not making enough money yet from our games to be able to completely self-fund the next ones. Especially as our games cost between 1.5 to 3M€ [1.58 to 3.16 million USD] to develop. So we are grateful for the opportunities partners like Sony or Xbox give us.”

For comparisons sake, here’s how Furi sold across various platforms, first including downloads through its PlayStation Plus deal: 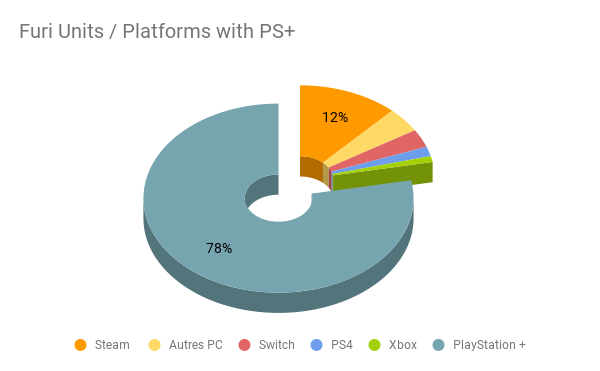 And now without the PlayStation Plus numbers: 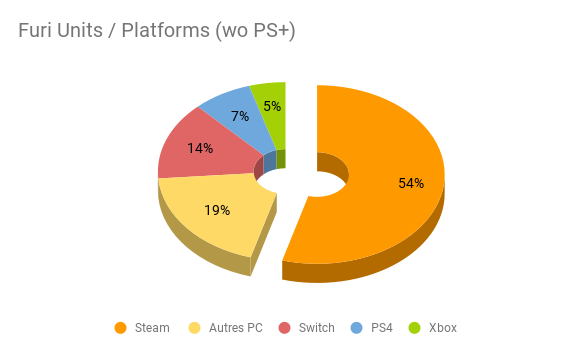 The future of Xbox is tied to the future of Game Pass; it’s the company’s ambitious pitch for the future of how video games will be played by audiences far larger than those who buy an actual Xbox. But Game Pass is only a few years old, and it’s only now that we’re starting to see how its priority at Microsoft can and will have consequences on what games are made.

“Game Pass is such a fantastic platform for players,” said Leprince, “so there are possibly more Xbox players than ever interested in indie games. Unfortunately, without Game Pass, it is also very hard for many indie games to be visible on Xbox.”

If you’re a developer who’s changed their design, production, or marketing because of Game Pass, PlayStation Plus, or other subscription services, I want to hear how you arrived there. My email is patrick.klepek@vice.com, my Signal number is 224-707-1561.

Leprice isn’t sure exactly why Furi connected more strongly on PlayStation than Xbox, though she theorized the platform’s “strong connection to Japanese games,” which also influenced the design of Furi, may have played a role. But the game also feels very French.

There is one reason for Xbox owners to be hopeful. The unexpected outcry caught the developer’s attention, and if Furi sells enough, a return to Xbox is possible down the line.

“We sincerely hope the DLC will be very successful,” said Leprince, “so that we can bring it to Xbox in the near future.”