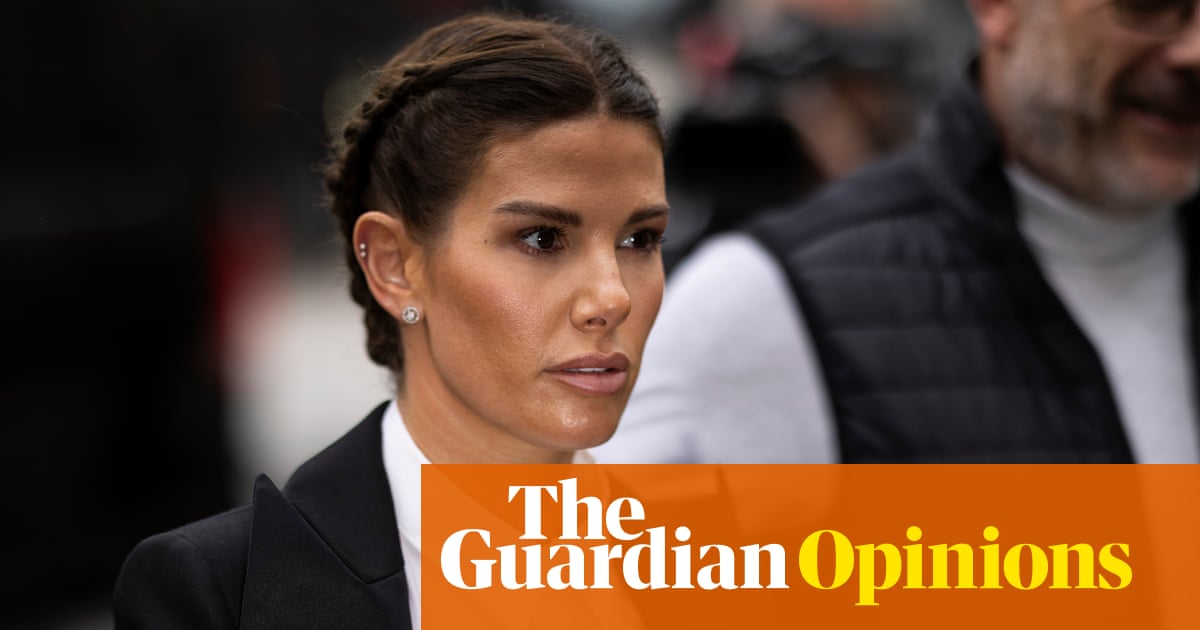 There are battles. There are libel battles. And then there is … Wagnarok. Yesterday afternoon, several hours into her cross-examination in the high court, Rebekah Vardy returned from an emotional break in proceedings to observe from the witness box: “It’s been a very long few days.” Yeah, well. Chat shit get banged.

It was Rebekah’s husband, Jamie Vardy, who first uttered that deathless adage, back in 2011 when he was playing non-league football, though weirdly he wasn’t actually making a heavily ironic comment on Britain’s libel laws. Spool forward to the present day, though, and we have to ask: which shit-chatter is getting banged in the high court? Is it defendant Coleen Rooney, against whom Rebekah chose – actually chose! – to bring this action, with Vardy’s pretrial legal costs alone estimated at £1m? Or is the shit-chatter in fact the sender of messages including “[I] would love to leak those stories”, and “I want paying for this”? Or, to put it much more iconically, is the shit-chatter … Rebekah Vardy’s account?

Whatever happens during both Coleen’s cross-examination and the final judgment, the sheer volume of Vardy’s dirty laundry that has been aired this week suggests the gavel has already come down in the court of public opinion. I have yet to see a non-sarcastic #TeamVardy hashtag out there in the wild. This trial is now by far the worst thing Rebekah has ever bought (including the yellow latex dress for the 2018 TV Choice Awards).

Admittedly, proceedings have added several hilarious entries to the annals of quotable quotes. The court heard how Vardy declared in 2019: “Arguing with Coleen is like arguing with a pigeon. You can tell it that you are right and it is wrong, but it’s still going to shit in your hair.” So at one end of London’s Strand we have Nelson’s Column in Trafalgar Square, and at the other end we have Rebekah Vardy in the high court. Both are covered in pigeon shit: who wore it better?

Speaking of outfits, Coleen turned out for day two of the trial in a £32.99 Zara dress, arguably nailing the “mum-of-four-who-literally-hasn’t-got-time-for-this-bollocks” look. Rebekah, meanwhile, was in something vastly more expensive, having seemingly fallen for a stylist spiel along the lines of, “I’m thinking Jackie O, with top notes of Amal Clooney.” It must be said that Rebekah has not been fantastically advised by a number of people around her in recent times, from anyone who failed to discourage her from issuing proceedings, to the agent and close friend who somehow dropped the phone she had been ordered to retain into the North Sea during a boating excursion.

You know, the North Sea. Classic Wag holiday destination. This detail – merely one aspect of the Vardy team’s full-spectrum data loss – yielded another quote of the trial, with Rooney’s barrister, David Sherborne, observing deliberately obscurely that the phone “is now in Davy Jones’s locker”. Rebekah to the judge: “I’m sorry, I don’t know who Davy Jones is.” Oof. That horrendous-whitey moment when you think some guy called Davy Jones has somehow recovered the handset and cached it. Fortunately, perhaps, the phone remains somewhere beneath the waves, and is easily the most valuable North Sea resource since Brent crude.

So where did it all go wrong? If she leaked those stories, Rebekah’s key social miscalculation was to fail to realise that ever since Coleen was thrust into the limelight as an innocent schoolgirl – and promptly derided as Queen of the Chavs, and voted Britain’s Worst-Dressed Woman of 2004 by some snooty tabloid – she has always prized loyalty above almost anything else. And, as you might expect from a proud Liverpool girl, she is not particularly crazy about the Sun. Anyone who cares to read the things Coleen has said down the decades would be left in absolutely no doubt as to her intense loyalty to family and friends, most of whom she goes back to childhood with. She likes fashion, yes – but she likes her mates and her family immeasurably more (total mensch, if we’re honest).

All this is the background to her now-legendary detective investigation – an attempt to prove that Vardy had betrayed a code that profoundly mattered. And there WAS a sisterly code among the Wags, back in the peak era of the 2006 World Cup. Contrary to the way a lot of the papers portrayed it, there wasn’t catfighting and one-upmanship among the wives and girlfriends of the England team back in those era-defining Baden-Baden days. As Coleen noted furiously soon after: “It makes a better story to say there were divisions in the camp.”

The Wags were monstered back then, of course, in another preposterous outbreak of tabloid snootiness. And the unwitting irony inherent in much of their monstering of Rebekah this week is that she is exactly what the papers want: the sort of person who will flog them unpleasant stories. If only there were literally decades of evidence that that would turn out to be a devil’s bargain.

As for the lessons to be drawn from this epic rubberneckers’ ball … if memory serves, I’ve written before about the wisdom or otherwise of talking to the press. Forgive the disloyalty to my profession, but my cast-iron advice to any friend who asks is always: don’t. The experience is utterly asymmetric. It will be an infinitely bigger deal to you than it will be to them, and more often than not turns out in unfortunate ways you didn’t predict.

What I haven’t said is that this advice was really inspired by some once given to me by a very good lawyer and very good friend. And that advice was: never litigate. Never, never litigate, unless it is absolutely unavoidable. Unless we’re talking about some serious crime, which is obviously different, then just don’t go to court. Do anything to avoid it. It is totally consuming, and it weighs on you in a way it never could for all the lawyers making money off it (and off you). In the months and even years you wait for your case to be heard, it’ll be the first thing you think about when you wake up, and the last thing on your mind when you go to bed at night. In 99 out of 100 instances, the best advice is to leave it, and get on with living your life.

Anyway, I merely pass it on. As Rebekah Vardy is perhaps now discovering, more than two and a half years after Coleen’s fabled Instagram post, very few things in this life are more horrifyingly overrated than having “your day in court”.