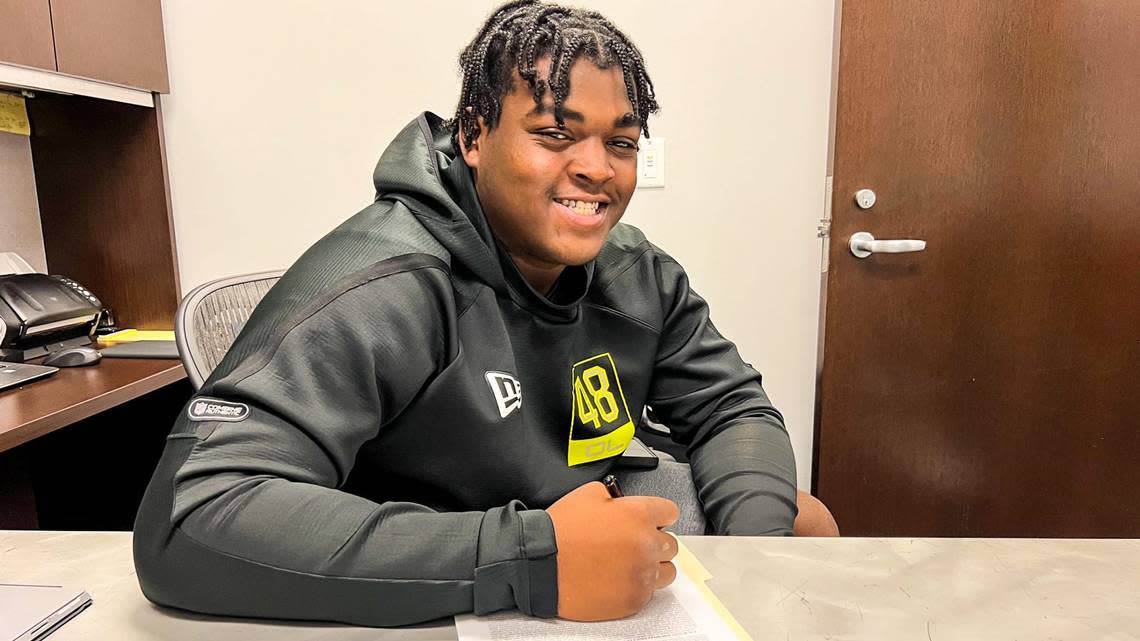 The Fort Worth native who played at North Crowley before blossoming into an NFL prospect at Tulsa signed a four-year, $13.38 million fully guaranteed rookie contract Friday morning.

He then took the field at left guard at rookie mini camp and made a quick impression on his coaches.

“You can see the twitch is something that jumps out at you,” coach Mike McCarthy said. “I thought he had a really nice day.”

The nice day began with the contract.

“It felt good to get it done,” Smith said. “It kind of surprised me. I thought I would be signing a little bit later but I got that done. We are on to business now. No restrictions.”

Smith has no concerns about the money going to his head. He has a financial adviser who will help him navigate things.

“I am the same guy I was before,” Smith said. “Money isn’t everything. I got a lot of love for the game. That is my main focus right now.”

Smith is expected to the team’s long-term solution at left tackle but he will start at left guard, which is where he opened minicamp on Friday.

It was his first time taking reps at guard since his senior season in high school at North Crowley. He played exclusively at left tackle at Tulsa.

“It felt good,” Smith said. “I surprised myself. You never know how something is going to go for the first day. But going through the steps today, going the team. I felt I had a pretty good period. There is much to improve upon and I look forward to domain that. For sure.”

There is no question Smith is going to put in the work to improve. He said he needs to play lower at guard and work on his leverage out of his stance.

But this is the start of a process that he has anticipated since being picked by the Cowboys. He jumped back in the weight room soon after the draft and couldn’t wait to get back on the field.

“Today was the first time I practiced in months. It felt good,” Smith said. “It felt like home.”

Smith started at guard on Friday. The Cowboys also plan to give him reps at left tackle as insurance for veteran Tyron Smith.

But left guard is where the team needs immediate help, because of the departure of Connor Williams to the Miami Dolphins and the questionable Connor McCovern as the only remaining option.

“They got a plan for me. I will take reps at guard and tackle,” Smith said. “But I am trying to play wherever I can contribute to the team and make an immediate impact.”

Smith is excited to work with Pro Bowl guard Zack Martin and left tackle Tyron Smith when the rookies begin practicing with the veterans next week.

He already got a good piece of advice and marching orders from Martin when he texted to ask him what he should work on.

“Come in shape and come ready to produce,” is what Smith said Martin told him.