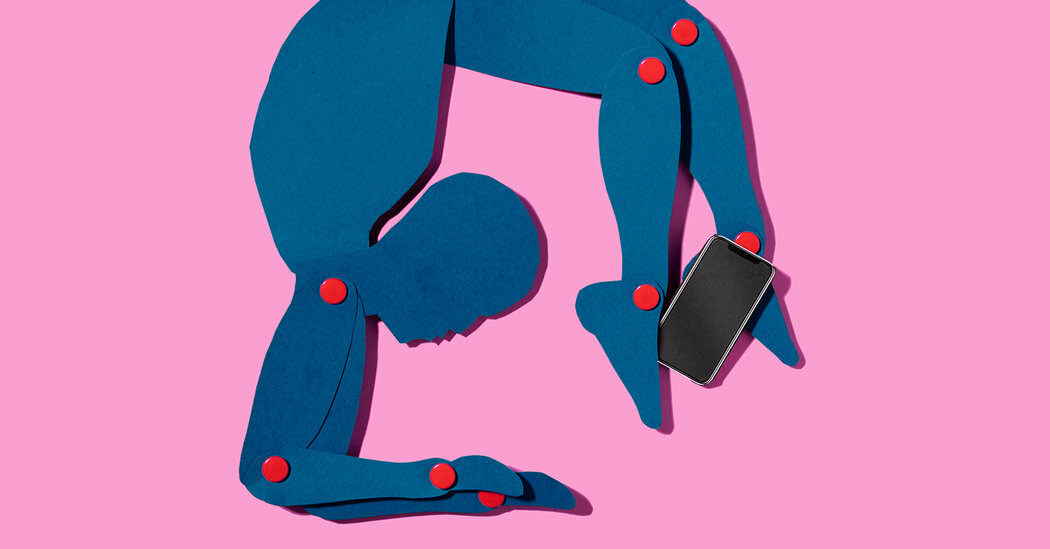 “Text neck” is another term you might have heard. Consider what happens when you hunch over to look at your phone: Compared with holding your head upright, this bent-over position increases the force on your neck muscles and cervical spine by a factor of four or five, said Dr. Jason M. Cuéllar, an orthopedic spine specialist at Cedars-Sinai Medical Center in Los Angeles and JFK North Hospital in West Palm Beach, Fla. This excess force, he said, can weaken the ligaments in the spinal column over time and cause pain. A 2017 study found a link between texting and sustained neck, shoulder and upper back pain, although other studies have not found a connection.

The cervical spines of some young patients Dr. Cuéllar sees are also bent in abnormal ways. This could be related to frequent smartphone use, too, he said, and may increase the risk of back problems. “What we think that does is it leads to accelerated disc degeneration,” he said, referring to the deterioration of the spinal discs, small shock absorbers that sit between the vertebrae to help us move comfortably. “We’re seeing more younger people, in their 20s, often 30s, for cervical spine problems.”

How to lessen the strain

What should you do if your phone is causing you pain — or if you’re worried it could eventually? Although my friend’s physicians pooh-poohed the idea that her phone had anything to do with her aching hands, she eventually got rid of her large smartphone and bought a smaller one to see if that would help. She also began using a voice-to-text option to reduce the strain on her fingers. Her pain quickly dissipated.

Dr. Schwartz agreed that downsizing to a smaller, lighter phone could be a good idea if you have small hands and that the voice-to-text tool can ease pain by reducing strain on your fingers. She and Dr. Enriquez recommended phone grips and stands like those made by PopSocket and Moft, too, which can take much of the strain of holding a phone off fingers and thumbs. Dr. Cuéllar said it could be helpful to use a stand that holds your phone at eye level, so you’re not straining your neck to see it.

If you’re experiencing a lot of pain, it’s a good idea to see a physical therapist or a doctor, such as an orthopedist or a physical medicine specialist, as they can recommend treatments and stretches, Dr. Schwartz said. “If you catch these things early, they don’t tend to become chronic,” she said.

But of course, if something causes you pain, the simplest solution is to stop doing it so much. In other words, Dr. Wolf said, “the best advice would be: Put down your phone.”