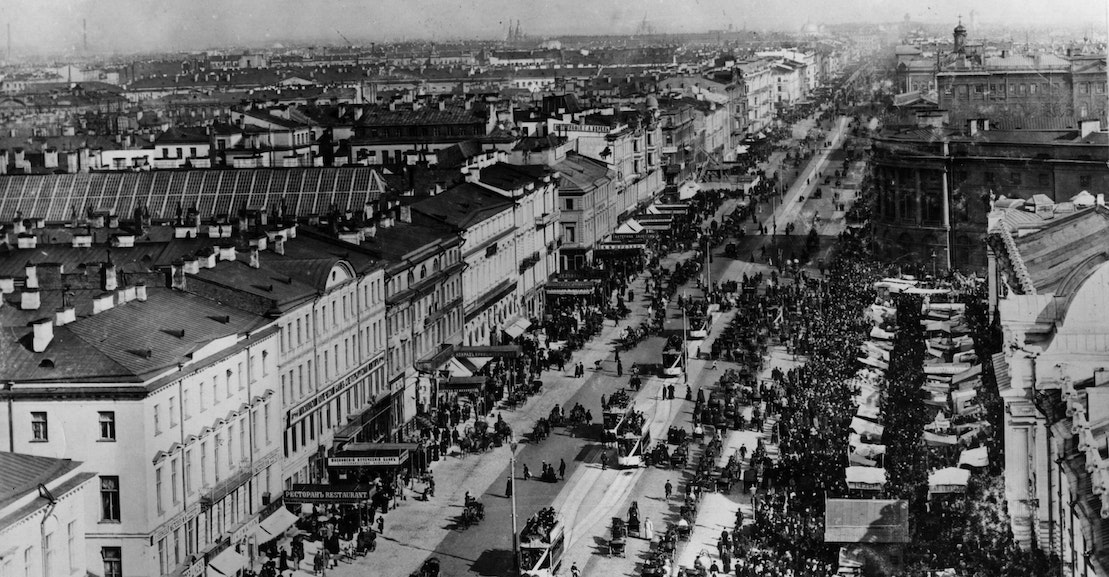 Yet any one of us who has lived in Russia for any
length of time and has occupied himself seriously with
Russian realities knows that there have been phenomena
in Russian life which speak with tremendous power and
meaning to the American perception: strivings which
every American instinctively understands, manifestations of human feeling which are not only entirely comprehensible to our world of thought but which leave
us with a feeling of wonder and excitement at their
scope and boldness and emotional intensity. Most of
these seem to me to relate to what we might call the
Petersburg era in Russian history, and primarily to the nineteenth century, which was of course the period of
maximum exposure of Russian society to Western influence. Western influence in those days meant European influence; but European influence, mind you, at a
time when the artistic and intellectual currents of old
Europe were themselves never more alive, never more
interesting, never more subject to astonishing and infectious changes.

In this sense, we might almost say that what Americans find meaningful and moving in Russian history is
the reaction of the Russian people to impulses from
without. It is not the isolated Russia—not the Grand
Duchy of Muscovy, vegetating through the decades and
centuries in its archaic darkness and intolerance, its
bigotry and cruelty, and its fear and hatred of the
foreigner—not the Soviet despotism, living in a world
of thought based on a desperate distortion of the image
of the world around it, and reminiscent of the old
Muscovy in so many ways besides just the return of the
capital to Moscow—it is not this Russia in isolation
which has produced the things that seize and hold
us; it is the Russia touched by the stream of Western
civilization, reacting to that stream with the incredible
freshness and sincerity and clarity of perception which
placed the Russian intellectuals of the nineteenth century among the greatest of all critics of contemporary
Western civilization—not only reacting to that stream,
but, which is even mere important, striving with tremendous intellectual and moral courage to take from
it that which was useful and hopeful and apply it
to Russia itself, in order that there might be light where
there had been darkness, that the immense backwardness and unhappiness might be overcome and that new
vistas might be opened up for the expenditure of human
energy and the realization of human dreams.

Please do not think from this that I am speaking of
any idealization or slavish imitation of the West on the
part of the Russian intellectuals. Their attitude toward
Western culture was always a dual and a tortured one,
combining both love and hatred. I am only saying that
Russia has been at her greatest when stimulated, or
stung into reaction, if you will, by contact with the West, and that accordingly the unfolding of the Russian
spirit in the nineteenth century was one of the great
chapters in the history of civilization. Never have more
inspiring blows been struck for things which commend
themselves to us as hopeful and progressive.

You will
find no literature more promising in the possibilities to
which it pointed than the poetry of Pushkin. You will
find no more gracious and yet telling caricature of the
faults of a society than Griboedov’s immortal comedy.
You will find no clearer and brighter flame of liberal
convictions than in the writings of Chernyshevski and
Alexander Herzen; no more profound reexamination
and testing of Christian ethics than in Dostoevsky; no
more brilliant and masterful fictional portrayal of a
society than in Tolstoy; no purer example of liberal
humanism and honest literary workmanship than Anton
Chekhov, and no brighter page in the history of dramatic art than those first performances of the Moscow
Art Theatre at the close of the century, touching new
springs in the human consciousness, opening up new
possibilities in the communication of emotional experience.