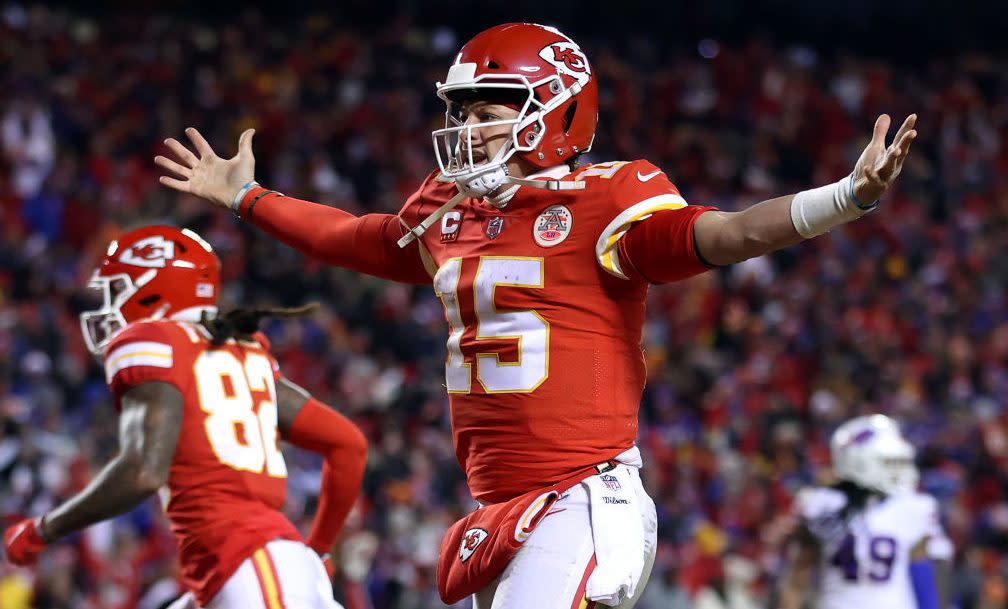 What a game! What a weekend!

The first three divisional games came down to a last-play field goal. The fourth ended on an overtime touchdown in one of the best games in NFL history.

Josh Allen and Patrick Mahomes had a duel for the ages.

The Chiefs and Bills combined for 25 points in the final two minutes, sending them into overtime in a back-and-forth battle. But Kansas City won the coin toss and Buffalo never saw the ball in the extra period.

Travis Kelce caught an 8-yard touchdown pass from Mahomes to complete an eight-play, 75-yard drive. It handed the Chiefs a stunning 42-36 win and sends them to a fourth consecutive AFC Championship Game. They will host the Bengals on Sunday.

It is a heartbreaker for the Bills, who scored with what they thought was the game-winner with 13 seconds left. Gabriel Davis‘ postseason record fourth score of the day and second in the final two minutes gave Buffalo a 36-33 lead.

Thirteen seconds proved too much time for Mahomes with three timeouts remaining.

He had a 19-yard pass to Tyreek Hill and a 25-yarder to Kelce to set up a last-play field goal of 49 yards by Harrison Butker.

The Chiefs thought they had the game won with 1:02 remaining when Hill caught a pass across the middle and ran for a 64-yard touchdown. (Officials missed a taunting penalty when he flashed the peace sign at a Bills player on his way to the end zone.) It gave Kansas City a 33-29 lead with 1:02 left and came only 52 seconds after the Bills had scored a go-ahead touchdown and 2-point conversion.

The game, though, wasn’t over until it was, and that wasn’t until Kelce’s catch in overtime. There were three lead changes and one tie in the final two minutes of regulation.

The two-minute rush began with 1:54 left. Buffalo chipped on the edge, giving Allen enough time to find Davis wide open in the end zone for a 27-yard touchdown. Cornerback Mike Hughes slipped on a double move by Davis, leaving the receiver wide open for his third touchdown of the day. Stefon Diggs made a leaping catch for the 2-point conversion after Allen ran around, buying time.

That started the back and forth and came down to whoever had the ball last. That was Mahomes and the Chiefs.

There were six punts, four penalties and no turnovers in an instant classic.