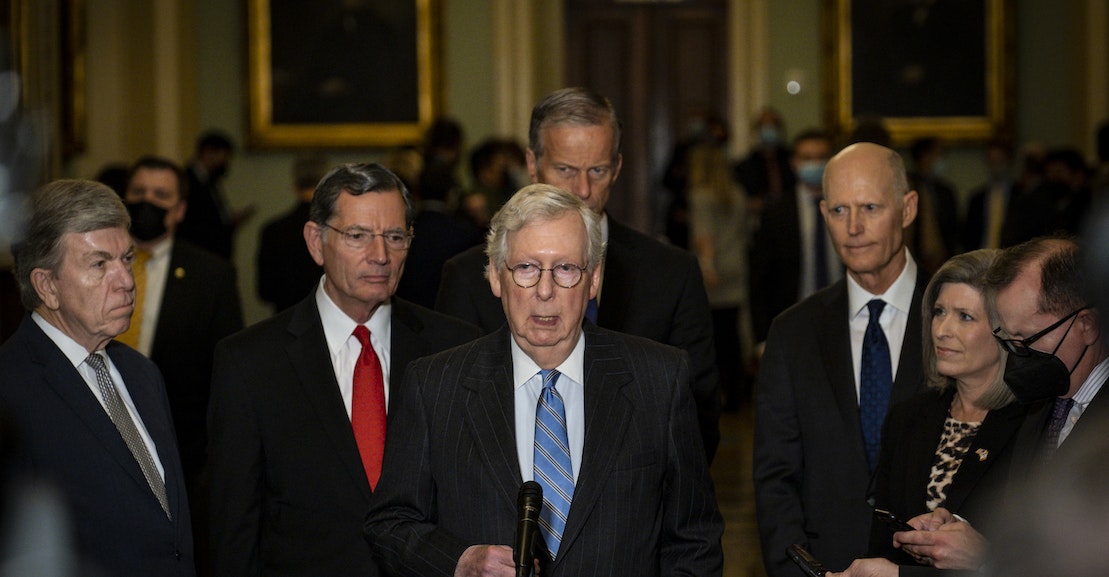 Democrats cannot afford to tarry too long, clinging to a thin sliver of hope that Biden’s legislative agenda might still pass in some form. At a certain  point, they’ll have to start writing a new midterm script about their opponents and what they stand for … and against. To get there, Democrats might need to bite the bullet and bring the House’s doomed version of the Build Back Better Act to the floor. Republicans’ refusal to pass it will put their opposition to popular policies on display.

Or it could mean taking a more aggressive approach. As the Brookings Institution’s Elaine Kamarck explained last month, there is a case to be made for a piece-by-piece strategy. Separated from the larger bill, some of the programs Democrats want to enact might attract enough Republican support to secure passage if they’re brought up for a stand-alone vote. Failing that, Kamarck writes, “Republicans would be forced to vote, on the record, against some very popular ideas and face Democratic criticism in the midterms.” Furthermore, doing it piecemeal might “make it harder for the president’s opponents to message an attack,” giving an edge to the president and his allies. “Either way,” she writes, “something is better than nothing.”

Naturally, there’s little doubt that taking such a step would mark the end of Biden’s futile courtship with Manchin. But Democrats can’t afford to be governed by the senator’s solo performance-art piece on the sunk cost fallacy. At some point, Manchin needs to be treated not as a good-faith partner but as someone who is specifically shielding the GOP from political damage. Besides, in actually putting things up for a vote, Democrats will be giving the West Virginia senator, along with any other recalcitrant Democrats, the only thing they are truly owed: the ability to make a choice. The party’s larger duty is to offer voters some clarity about who is really for and really against the popular parts of the Biden agenda. Illuminating voters in this fashion is critical for the upcoming midterm elections and beyond.

It is truly a pity that it’s come to this: that a bill that promised to “build back better” has been reduced to some mere stalking horse for midterm political messaging. But Democrats need to demonstrate a commitment to these core ideas that form the centerpiece of their governing agenda. Even if it doesn’t work in the short term and they get locked out of power in 2022, voters dissatisfied with GOP governance might find their way back to a party that took clear stances on the country’s economic well-being. The fact that Congress might not deliver Biden’s life-altering agenda and improve so many Americans’ lives is a tragic failure. But if the failure is all that’s left, then how it fails matters a great deal.