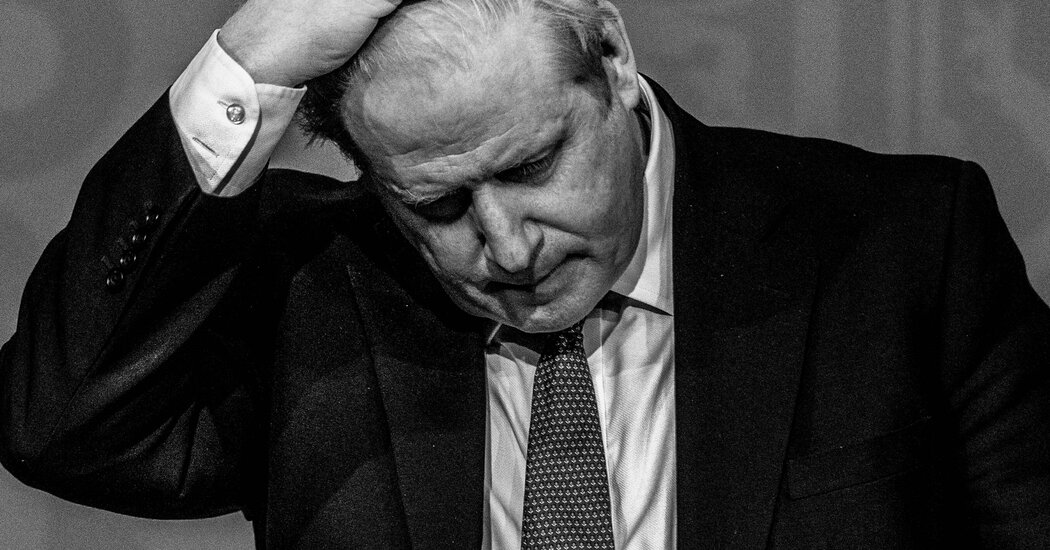 The charge sheet is endless — but so too, apparently, is the forgiveness of the British public for a man many perceive to be fun, optimistic and, despite his unfailingly elitist outlook, somehow one of us.

Mr. Johnson has also been endlessly indulged by wives who long seemed to forgive his alleged cheating for the sake of excitement, by employers who for decades overlooked his duplicity and selfishness in exchange for his stardust, by voters who traded a little chaos for his popular hail-fellow-well-met act and boosterish take on being a Brit. Even his record of presiding over the country’s disastrously high Covid death rate often elicited the response, “Well, he’s doing his best.” Or it did.

On the day Parliament grilled him over the “Partygate” allegations, he reportedly left Downing Street lying down in his official car to avoid photographers. Thousands have flocked to social media to vent their fury. Newspapers have joined in: The left-leaning Daily Mirror splashed “DISGRACE!” across its front page. The Conservative-leaning Times of London roared that “Defiant PM refuses to quit as polls slip further” — writing that a YouGov poll found that six in 10 voters want him gone. Most expect that figure only to rise in the coming days.

Clearly, something has changed. It may seem to some as a mere social kerfuffle, but it actually is a matter that cuts right to the hearts and souls of a nation. Mr. Johnson the joker is finally finding himself in the dock of public opinion, and the jury is turning against him because he has belittled our sacrifices and our pain. A search for his basic decency and compassion has discovered a man devoid of empathy, a leader who believes he is exempt from responsibility or honor. He could do what he liked with who he liked — attend a B.Y.O.B. party to enjoy the “lovely weather” — while others outside his charmed circle faced fines for meeting more than one friend outdoors.

On May 19, 2020, the day before that now infamous party in the Downing Street garden, I buried my mother, Jean. A glamorous woman who had once loved to paint, swim in the sea and party with friends, she had died, alone, of Covid. The home told me everyone else on her floor had died, too.

I had not been allowed to see her in person since March of that year because of lockdown restrictions and an overwhelmed health care system. I was informed of her death by email. By those same strict laws imposed by Mr. Johnson, only 10 people were allowed to attend her funeral. Many relatives were barred, as were all friends and neighbors. For the few allowed to join me, I handed out a single white peony to lay near her coffin. We were forbidden to touch it.

My mother, Jean, was just one of tens of thousands who died alone: sons and daughters unable to say goodbye to their parents, young mothers unable to say farewell to their children, so many deprived of the comfort of family or friends at the end, leaving those behind distraught.