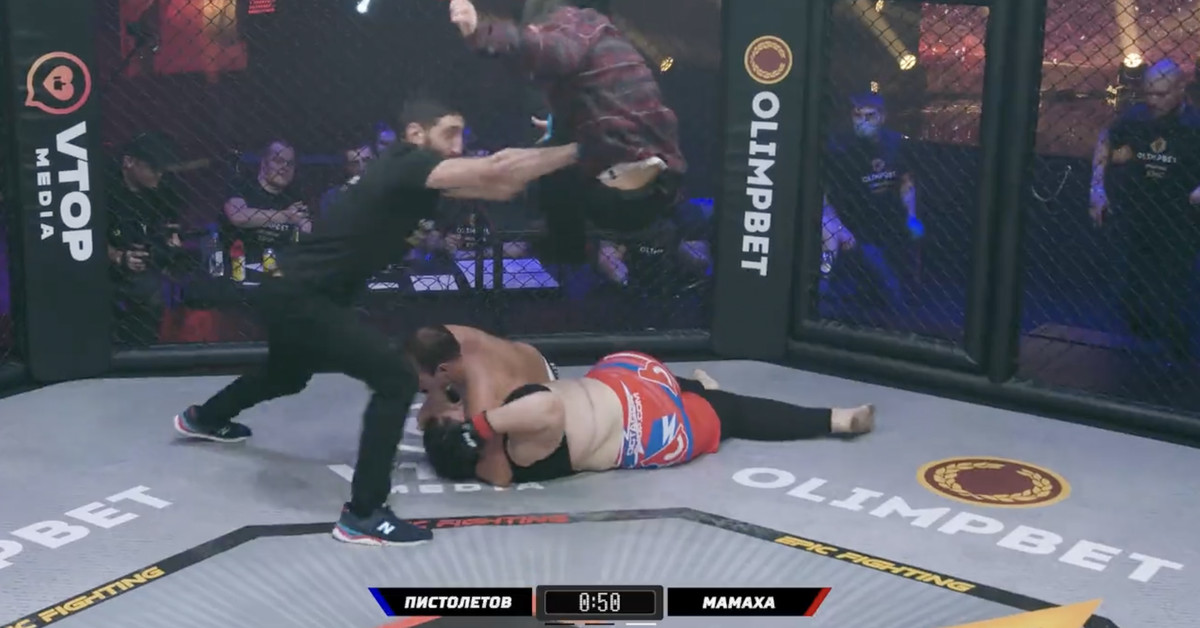 The 2022 MMA calendar year hasn’t quite kicked into full gear yet, though this weekend looks to be a busy one with Legacy Fighting Alliance returning tonight, the UFC and KSW returning on Saturday, and ONE Championship wrapping up a card as you’re reading this. So keep your eyes open.

They’ll certainly be locked in on this week’s opening scenes from Epic Fighting Championships, which are already making a strong case for the most bizarre clips of the year just two weeks in.

Anyhow, thanks to this handy instant recap from @Matysek88 (make sure to give them a follow on Twitter), we’re told that this standard, not-at-all strange, and certainly above-the-board combat sports contest featured not just a pair of non-fighters fighting but the referee having to shove someone in mid-air after they literally tried to jump in and interfere.

No. I’m not entirely sure what is happening either. Just loop that one a few times and get back to me.

Apparently, even though Pistoletov went on to snag a submission, there was a discussion afterwards and he agreed to go to a fourth round. Mamaha then wins a decision by marching forward for two minutes and not doing much else.

Again, all above board, nothing to see here.

Don’t believe any of this? I just watched it and I don’t believe it. But if you need to see for yourself, the entire event is available for free on YouTube.

Before you get into this next section, just know that this is some serious back-of-the-video-store, behind-the-curtain stuff we have here. King of the Streets proudly brings to you bare-knuckle fights on a rooftop, with a seemingly anything-goes rule set (and I use the term “rule set” loosely) and plenty of blood.

The first fight between “Orange Dwarf” and Sercan ends fast, so we don’t get to see much of how this concept plays out. It’s more like something you would see in a traditional MMA fight.

The second matchup between Tom and “Cyrus” is a lot tougher to watch, but also fascinating in a grotesque way. Over the course of this brief matchup, we see that the people on hand to oversee the fight are allowed to touch the competitors without the action officially being stopped, submissions are an option, I think one guy jams their fingers in the other guy’s mouth at one point, and there are soccer kicks.

Oh yeah, and some plasma was spilled as well. Lots of it.

If you want to see more, both fights are available on the King of the Streets YouTube channel, though I will warn again that it could be difficult to watch, even for hardened MMA fans who might be used to seeing more sanitized combat.

Of course, when I refer to more sanitized combat I’m talking about Moscow’s hottest MMA promotion, Hardcore Fighting Championships. A fine organization that would never encourage any sort of extracurricular chicanery.

Instead we get good ol’ fashioned chin-checking, this time courtesy of a knee knockout by Shovkal Churchaev.

The timing on that switch knee was scary. And the follow-up punches on the ground made sure that this was a knockout knockout. Fortunately, Filipp Kosyrev was back on his feet for the winner’s announcement.

You can check out a free replay of HFC 19 on YouTube.

Over in Lagos, Nigeria, the UFC welterweight champion himself Kamaru Usman was on hand to host African Knockout’s Face Off Fight Night event. If these two highlights are any indication, you have to think that he liked what he came to see.

Daniel Emeka Eze proved once again that swangin’ and bangin’ is the universal language of martial arts as he poured on the punches to dust Ayivor Komlan Mawuko.

A tip of the cap to Melvin Ugochukwu for giving us our first Humpty Dumpty fall of the year with this counter right on a charging Damilare Abdulrahm.

I’m not entirely sure what Abdulrahm thought he was doing with that leg kick-1-2 combo thrown from about five feet away, but I do know what Ugochukwu did: He showed out with the No. 1 fighter on MMA Fighting’s Pound-for-Pound list in the building.

If you enjoyed Eze’s knockout, you should appreciate Jun Young Lee scoring a finish in a similar situation, but in reverse at a Beast FC show in Daegu, South Korea (in association with Brave FC).

You know what, let the clip speak for itself.

Hyo Je Cho definitely smelled blood here and you have to respect him going in for the kill like this. Even more respect has to go to Lee for weathering the storm and rifling off a beautiful counter punch for the no-doubt KO.

Lee wasn’t going to be the nail on this day.

That’s all for this week, stay tuned to Missed Fists for the rest of what is sure to be another packed 2022 and in case you missed it, check out the best-of-the-best highlights and oddities from last year as we celebrated the fourth annual Fisty Awards.