A MILLIONAIRE who starred on Married At First Sight Australia has been arrested for assault & stalking.

Justin Fischer – who split with Carly on the hit E4 show – appeared in court on December 26.

According to court documents seen by Daily Mail Australia, the 43-year-old was charged late with the offence of stalking and intimidation, as well as two counts of assault against Andrew and Natalia Burton.

The 45-year-old was remanded on bail to a date this year, where a formal plea will be entered.

Fischer was also issued with an interim Apprehended Violence Order on behalf of the alleged victims, Andrew and Natalia Burton.

He has been ordered not to “assault or threaten, stalk, harass or intimidate” the pair or “intentionally or recklessly destroy any of their property”.

In New South Wales, the offence of intimidation or stalking carries a maximum penalty of five years in prison.

The divorced father-of-two – who appeared on MAFS Australia in 2018 – has kept mainly out of the spotlight since the TV experiment, focusing instead on his business ventures.

The Sun has reached out to Fischer for comment. 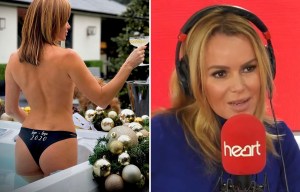 Justin was coupled up with marketing manager Carly, 35, by the MAFS relationship experts, but things certainly didn’t last long between the two.

The pair decided to opt out of the experiment before the final decision.

Over the past three years, Justin has kept his dating life to himself while he focused on looking after his two daughters.

Married at First Sight Australia: Carly and Justin seek advice from the experts about how to make their relationship feel more comfortable