BRITS can return to France from today as the country has lifted their UK travel ban.

France first announced the travel ban on December 16, due to the Omicron variant.

However, French tourist minister Jean-Baptiste Lemoyne confirmed that the entry restrictions have been relaxed, in effect from today.

He wrote yesterday: “We are relaxing the entry conditions in France from the UK for vaccinated travelers.”

He confirmed it would include the “end of compelling reasons and isolation on arrival”.

This means tourists can now visit the country on holiday.

Brits will still need a negative test taken within 24 hours of arriving in the country, which can be a lateral flow or PCR test, as well as sign a “déclaration sur l’honneur” on arrival.

Brits will also need to be vaccinated – anyone without both jabs will still need a compelling reason and have to quarantine for 10 days.

Travellers have already started queueing for the Eurostar this morning at London St Pancras, with routes between the UK and Paris continuing.

Most read in News Travel 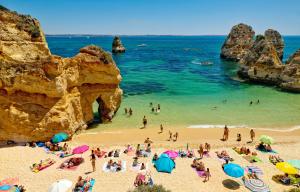 It is great news for families wanting to visit Disneyland Paris ahead of the half-term holidays next month, with the theme park announcing exciting new events in celebration of its 30th anniversary.

Tour operators also have some cheap deals on offer to take advantage of.

Tourists will still need to have a vaccine pass as well, to be able to enter restaurants, bars and tourist attractions in France.

All adults who have had their second jab more than seven months ago will have to have their booster for the vaccine pass to be valid.

This is just for anyone aged 18 and over – kids between 12 to 17 only need a simple health pass which allows a negative test.

Other countries are starting to ease their travel rules now Omicron has progressed across Europe.

Germany lifted the travel ban on UK tourists just weeks after introducing it.

Cyprus has also eased some of their travel restrictions, and now accepts lateral flows from Brits entering the country.