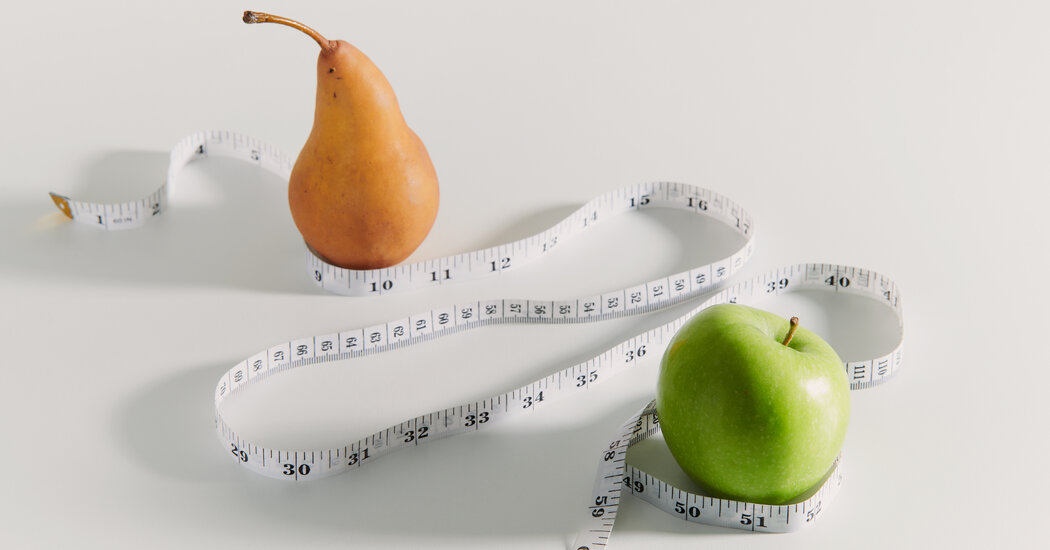 Q: I’m a woman in my late 40s and for the first time I’ve developed belly fat. Is there any way to target it through diet or exercise?

If you’re a middle-aged woman and you’re noticing that your midsection is expanding, the first thing to know is that you’re not alone.

“This is a physiological change that, unfortunately, really happens to virtually all women as we age,” said Victoria Vieira-Potter, an associate professor of nutrition and exercise physiology at the University of Missouri. “It’s not something you did,” she added, or an indication that you’re letting yourself go, so to speak.

In the years leading up to menopause, Dr. Vieira-Potter said, levels of hormones like estrogen shift. And research suggests that these shifts likely lead to changes in body shape, she said — along with hot flashes, mood changes, irregular periods, trouble sleeping and more. This perimenopausal transition, which typically begins between 45 and 55 and lasts for about 7 years, officially ends one year after the last period. At that point, women are said to be in menopause.

But around menopause, there’s a striking change in where women store fat on their bodies, said Dr. Gail Greendale, a professor of medicine at the David Geffen School of Medicine at the University of California, Los Angeles. In one 2021 study, for instance, Dr. Greendale and her colleagues tracked how the bodies of 380 middle-aged women in Boston and Los Angeles changed over 12 years, including the time before, during and after their transitions to menopause. While the results varied according to race and ethnicity, the overall outcome was that around menopause, the women started storing fat more like men — less around the thighs and hips and more around their midsections.

For example, among the white and Black women in the study, there was no net change in their hip and thigh fat over the 12 years, but their midsection fat increased, on average, by 24 and 17 percent, respectively. They gained midsection fat most quickly during the few years before and one year after their final period.

In other words, Dr. Vieira-Potter said, women “start to adopt that apple shape instead of the pear shape.”

It’s also common for men to gain more fat in their midsections as they age, but it is a slower and steadier change. “There’s no analogous thing in men where an organ just goes ‘Later!’ and shuts down,” Dr. Greendale said, referring to women’s ovaries during menopause.

According to Dr. Greendale, researchers don’t know exactly why these shifts in fat storage occur. But while normal, they are something to keep an eye on, she added. Increases in belly fat — and in particular, the type of visceral fat that sits deep inside the abdomen and surrounds the organs — have been linked to certain increased health risks, like of heart disease, diabetes and cancer. This fat, which can expand not only with menopause, but with stress, lack of exercise, poor diet and more, is the “troublemaker fat,” Dr. Greendale said. On the other hand, fat stored in the thighs and hips, creating the so-called pear shape, seems to protect against diabetes and heart disease.

Despite the ubiquitous internet ads claiming to hold the secret to shrinking belly fat, experts really don’t know how to address the waistline expansion associated with menopause, Dr. Greendale said. Researchers are only just beginning to understand how and why the body changes in this life stage, and she’s careful not to promote a solution without evidence that it works.

“What worries me is that women who are trying to do right by themselves and keep up their exercise habits and eat a good diet may feel defeated” if their belly fat doesn’t budge, she said. “They may be doing everything they can, and their central fat may just have a mind of its own.” Excessive dieting and exercising too much can also be harmful, she pointed out.

That said, getting at least 2.5 to 5 hours of moderate physical activity per week has been shown to help prevent heart disease and diabetes, both conditions associated with increased abdominal fat. Following a healthy diet — including one that incorporates plenty of fruits, vegetables and whole grains, and that prioritizes fish, legumes, nuts, low-fat dairy and lean meats as sources of protein — can help protect against these conditions, too.

Physical activity also helps to maintain healthy muscle and bone mass and improves insulin functioning, Dr. Vieira-Potter said. “Even if you’re exercising and not losing weight, you’re doing lots of good metabolically.” Exercise feels good, too, and might help counter some of the mood changes that can come with menopause.

It doesn’t need to be intense or strenuous to be beneficial, Dr. Vieira-Potter said. “Just find something you love.”

And, if you’re still feeling discouraged by your changing body, despite a good diet and exercise program, Dr. Greendale recommended a dose of self compassion. “If my middle is resistant, I’m going to understand that may be part of the life stage I’m in.”

Alice Callahan is a health and science journalist.