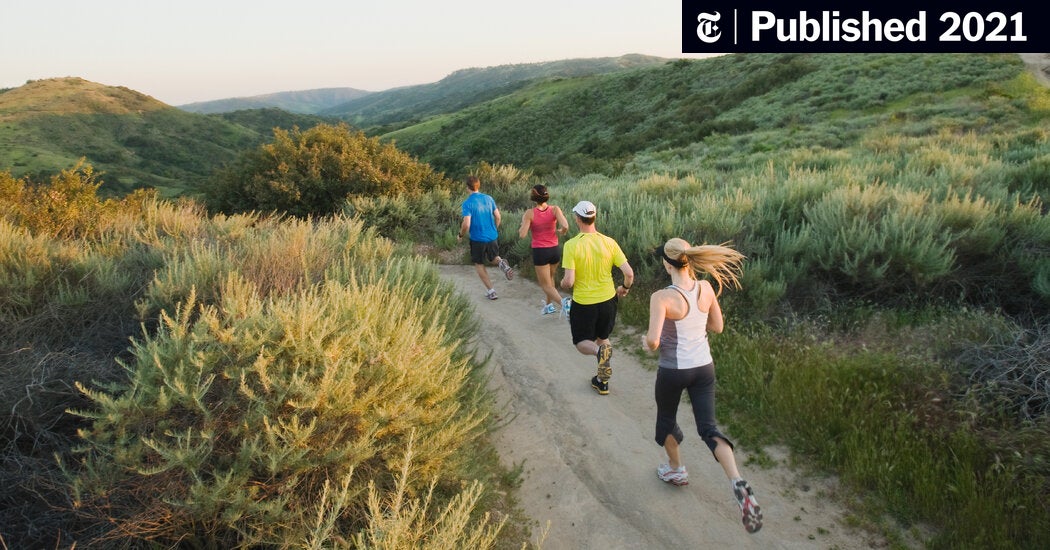 Until last week, the only time I’d finished a race was during Track and Field Day in fifth grade. By middle school, I was trying to figure out how to get out of gym class because it was too hard for me to run a mile. Sports, in general, were not my thing. Running, less so.

As an adult, I have gone to the gyms, taken exercise classes and worked with trainers. But none of it ever brought me joy, or made me want to keep doing such things. The most sustained exercise I did in the past decade was a regimen of deep knee bends with a colicky baby in my arms after my first kid was born.

Then lockdowns came along, and I surprised everyone in my house, especially myself, by signing up to join a local running group which had moved from holding local meetups to checking in with each other virtually. Because it was exercise I could do alone, the conditions were ideal.

But for a newcomer to running, the notion that you can just throw on a pair of sneakers and hit the road turns out to be a big, fat lie, I assume created by people who started running after giving up soccer or basketball.

Every time, I have to push myself to run that horrible first minute. I get breathless. Muscles I didn’t know I had now ache like I never thought possible. I feel self-conscious when a neighbor spots me bouncing down the street. And yet, I stick with it. I can now run 20 minutes in a row, and they are not all horrible.

Here were a few of the things I learned that have helped me to get out the door — and keep going even when I would much rather stop for an infusion of iced coffee.

If you are the type who smirks at inspirational quotations on Instagram, set aside that part of your brain for the entirety of a run. I now understand why fitness instructors are so often relentlessly earnest. You need positive messages to get through the hard parts of working out.

Try a simple thought exercise recommended by Coffey, a filmmaker and the founder of DeFine New York Run Club. Ask yourself, “What’s my why?” and “What’s my purpose?” Coffey’s “why” was to get in shape; his purpose was to be able to keep up with his three young children. “I want to be energized when they want to play,” he said. “I don’t want to be the parent who says ‘I can’t.’”

Get a voice in your head.

To invite such positivity into my own cold dark heart, I take the outdoor running classes in the Peloton app, which is less expensive than their stationary bikes or treadmills. For 20 to 60 minutes I get an instructor in my ear keeping me going, playing his or her favorite music and sharing running tips or suggesting when to walk.

“I let people lean on me as the coach,” said Becs Gentry, one of Peloton’s running instructors. Since she records classes while running herself, Ms. Gentry uses her own internal battles as motivators. If she feels exhausted she’ll say: “I know this sucks, guys, but we are gonna do this together. Don’t let me down.” Or: “You can do this for three minutes. Think of all the things that take longer than three minutes.”

For a less chatty virtual trainer, you can use the Couch to 5K app, a beginner-friendly program that lets you choose characters like Johnny Dead, a brain-chasing zombie, or Runicorn, the running unicorn, to tell you when to run or walk.

Experts will advise sleeping in your running gear — compression tights and all — so there is nothing between you and starting your morning run. The idea is that you’re putting friction between you and getting out the door. And, as Tara Parker-Pope explained in our 7-Day Well Challenge, removing obstacles like this makes it more likely you’ll achieve a new health goal. But there was no way I was sleeping in a sports bra or getting myself out of bed before 7 a.m. to run.

The light bulb moment came when the woman who leads my running group, Helen McCaffrey Birney, told us over Zoom that she just doesn’t always wear clean clothes to run. She re-wears her cute leggings with pockets, and no one is the wiser. Since the one thing I need less of during the pandemic is laundry (a close second to dirty dishes), this has been the perfect way to cut down on friction and housework.

If you’re also OK re-wearing gear, just be sure to keep those dirty clothes in one spot in your room, perhaps on a hook so the sweat dries in time for the next workout. Eventually, you should wash them before they start announcing themselves as they enter a room — my experience is probably after three wearings.

You may not think of yourself as speedy, but you are probably running faster than you need to. Think you’re moving slower than if you were walking? Slow down more. Feeling like a turtle? Put the turtle in slow-motion.

You will be able to run longer this way, and the slower you go the more you can pay attention to your body. That ache in your shins is telling you something, but not necessarily that you need to stop running. Maybe you need to put your foot down differently or try a different recovery stretch.

As a bonus, you will also learn your way around when you run slowly. “Running was my GPS,” Coffey told me. When he takes out groups in New York City, the goal is never to get fast; it is to see the city. As someone who is extremely directionally challenged, exploring my small suburb by foot has meant finally knowing which street to take to get to my kids’ art classes.

Finding a chill community like Coffey’s “run crew” near you can be a godsend. They’ll hold you accountable without getting competitive. And for some, having that group to run with in person is motivating simply because it’s social.

But if you are like me, and running with other humans creates more pressure to perform, join up virtually. Lurk in an online running group to see if you become inspired reading about others’ experiences. Ms. Birney, who is the chief executive of Cultivate Health Coaching, said people have been in her Facebook group for two years before actually deciding to start running.

Through Run Across America, a site that launched last year, you can join virtual races with a buddy or a team that raises money for nonprofit organizations and track your progress toward a goal. You can even take a “sweaty selfie” with their app each time you finish a run.

For Ms. Birney, taking that picture is key. When she moved her program online, she started asking everyone to share photos after finishing a run. Now, the group’s feed fills up with messy pictures from women like me. We post our pictures proudly and the likes and congratulatory comments roll in. That camaraderie may be the biggest motivator I’ve found yet.

Ready to get started? Find someone who will hold you accountable, listen to upbeat trainers, think positively and snap a photo in your dirty clothes. Then we can all go right back to being our snarkiest non-sporty selves.