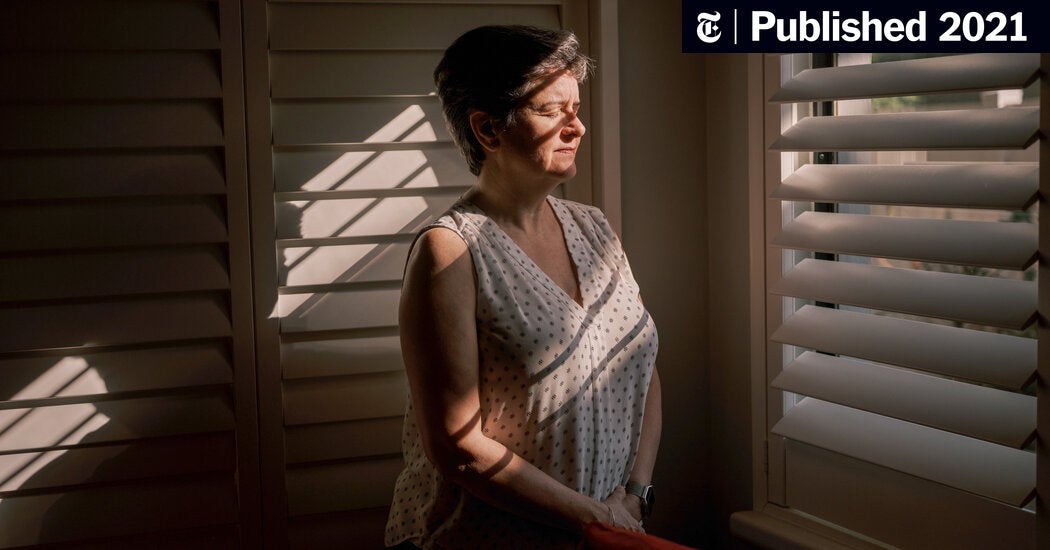 For most of her life, Andrea Carbone, a 51-year-old paralegal living in Florida, wasn’t a big drinker. But when the pandemic struck, she worried constantly about her job, her health and the safety of her children.

While many people were able to work from home last year, Ms. Carbone was required to go into the office. Some mornings she would cry in her car as she drove along deserted roads and highways to get to her office in downtown Tampa, which looked, she said, “like a ghost town.”

As her stress levels soared, so did her alcohol intake. Before the pandemic, Ms. Carbone would have a glass of red wine with dinner most nights. But by May, her intake had climbed substantially. “I noticed I was having a glass of wine as soon as I got home, then a glass with dinner, then we’d sit down to watch TV and I’d have another glass or two,” she said. “By the end of the night I was drinking a bottle.”

Ms. Carbone is far from alone. The widespread fear, frustration and social isolation surrounding the tumultuous events of the past year — the pandemic, civil unrest, political upheaval — caused stress levels to skyrocket, with many people increasing their alcohol intake. Women and parents of young children seem to have been hit particularly hard. A nationwide survey commissioned by the American Psychological Association in February found that one in four adults reported drinking more this past year to manage their stress. That rate more than doubled among those who had children between the ages of 5 and 7.

Another study published in JAMA Network Open in October found that Americans increased the frequency of their alcohol consumption by 14 percent compared to a year earlier. But the same study found a 41 percent increase in the number of days on which women drank heavily, defined as having four or more drinks in a couple of hours.

The psychological damage from the past year has caused sharp declines in physical health, including widespread weight gain and disruptions in sleep. Hospitals around the country have reported an increase in admissions for hepatitis, cirrhosis, liver failure and other forms of alcohol-related diseases. Almost no group has been spared.

Driftwood Recovery, an addiction and mental health rehabilitation center in Texas, has had so many requests for treatment this past year that it has a two-month waiting list. Vanessa Kennedy, Driftwood’s director of psychology, said that many of her clients are parents who started drinking heavily as they struggled to balance their day jobs with home-schooling and other parental responsibilities.

“They’re used to having their kids go off happily to school and having an experienced teacher teach their children while they go to work and focus on performing well and providing financial support for their family,” said Dr. Kennedy. “Their work roles are conflicting with their parenting roles, and it’s been difficult for them to create space and do those things well.”

Dr. Kennedy has treated a wide range of patients who turned to excessive drinking this past year. Some lost their jobs or shuttered their businesses, which left them without daily structure and the means to provide for their families. Others were college students who felt socially disconnected when they were sent home to do virtual schooling, or older adults who drank because they were depressed that they could not see their loved ones or hug their grandchildren.

Before last year, Gordon Mueller, a retiree who lives in Rochester, N.Y., rarely consumed more than one or two drinks a day. But when the pandemic struck and the economy and stock market stumbled, Mr. Mueller was consumed by anxiety as he followed the news and worried about his retirement account. As Mr. Mueller sheltered in place at home with his wife, his alcohol intake escalated to seven drinks a day: vodka cocktails in the afternoon, wine with dinner, and a whisky nightcap before bed. “We had no idea if we were going to financially get through this thing, let alone get sick and potentially die,” he said. “It was just a lot of fear and boredom. Those were the two emotions.”

But many people have found novel ways to rein in their drinking. In December, Mr. Mueller turned to Moderation Management, an online community that helps people who want to cut back on their drinking but not necessarily abstain. He started attending Zoom calls with other members and using the organization’s private Facebook group to learn tips and advice to reduce his drinking. Then, in January, he decided to give up alcohol for a while to see how he would feel.

“I’m happy to say that I haven’t had a drink this year, and I feel a lot better: I sleep better, and I can get more things done,” he said. “The nice thing about this moderation group is that it’s not an all-or-nothing ‘You can never drink again or you’re a failed alcoholic’ approach.”

In Tampa, Ms. Carbone started using a popular app called Cutback Coach, which helps people track their alcohol intake and set goals and reminders so they can develop healthier drinking habits. Using the app, Ms. Carbone makes a plan for how much she will drink each week. The app tracks her daily intake, sends her notifications about her goals, and updates her on her progress, including all the calories she avoided and the money she saved by drinking less. She now has at least two “dry” days per week and has cut her drinking in half.

“Seeing the progress that I’ve made makes me feel good and makes me keep doing it,” she said. “I sleep a lot better. I wake up less at night. I wake up feeling less sluggish, less tired, and I’ve been going to the gym more regularly, whereas before I couldn’t drag myself there.”

For people who want to reduce their drinking, here are some simple tips that might help.

Rather than relying on willpower alone, make a plan every Sunday to limit your drinking to a specific amount each day of the week and stick to it. This is a tactic known as precommitment, which Cutback Coach uses to help its thousands of members. The idea behind it is that you increase your chances of success by committing to a plan and restricting your ability to back out later on. Some other examples of precommitment are deciding not to keep junk food in your house and encouraging yourself to exercise by scheduling a workout with a friend. Studies show that precommitment is an effective way to change behavior.

Talk to your spouse, a friend or a family member about your plan to drink less. They can hold you accountable and help you find healthier ways to manage your stress. Make a plan to go for a walk with your friend or partner at the end of the day, for example, instead of opening a bottle. “You might find that you have a buddy who says, ‘why don’t we go play tennis or do something else to unwind after work,’” said Dr. Kennedy. “There are a lot of benefits to trying healthy activities instead of the wine.”

Set up rules to slow your drinking. Mary Reid, the executive director of Moderation Management, follows a simple rule that helps her avoid drinking heavily: Each glass of wine she drinks has to last at least one hour. “My strongest tool is timing my drinks,” she said. “We always tell new members that we do have stop buttons, but we just ignore them.” Dr. Kennedy at Driftwood employs a similar rule. She tells people to alternate every alcoholic drink they have with a glass of water.

Some people drink more out of habit than an actual desire for alcohol. Try substituting sparkling water or another beverage for your usual drink. Mr. Mueller used to have a cocktail every night while watching the evening news. But when he cut back on alcohol, he switched to drinking a cup of tea or nonalcoholic beer while watching the news and realized he just needed a beverage to sip. “Now I still have a glass in my hand but it doesn’t have alcohol,” he said. “It’s almost like having a glass in your hand is the habit and not the alcohol.”